Oceano's Measure A-20, a parcel tax that would have maintained its end of the Five Cities Fire Authority agreement, had lots of support from voters but, so far, not enough to meet the needed two-thirds majority for it to pass.

On March 1, two days before the election, the Oceano 911 Committee for Measure A-20 hosted an impromptu car parade that launched from Seabreeze Mobile Home Park along Cienega Street. 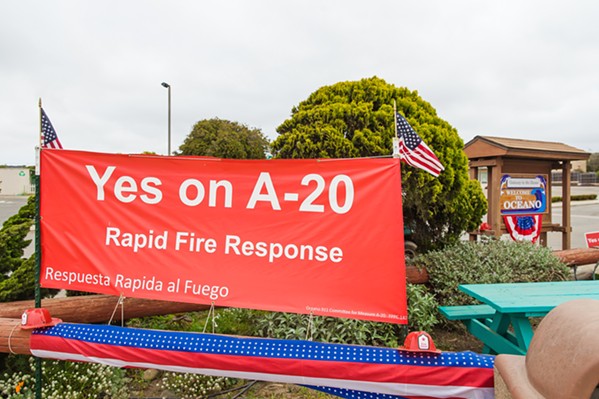 Multiple cars had red signs taped on them that read, "Yes on A-20, Rapid Fire Response" in English and Spanish.

Karen White, an Oceano Community Services District board member and member of the A-20 committee, told New Times the parade was a last-minute effort to get the vote out and gain support for the measure.

The proposed parcel tax would have cost homeowners in the district an annual amount of $180, about $15 a month, bringing in roughly $422,000 a year. Those funds would have secured rapid response times for medical emergencies and fire protection services, 24/7 staffing, and a third full-time firefighter.

According to unofficial election results, the measure had a total of 826 votes—63 percent—in favor of the proposed parcel tax and 478 votes against it.

White said she felt it was a pretty good turnout for the measure, but she was let down overall.

"I was kind of disappointed that only about a third of the folks voted," she said.

Oceano has a population of 7,286, according to the most recent U.S. Census Bureau data, but there were only a total of 1,304 votes counted as of press time.

White said the whole point of putting the measure on the ballot was to find out how the residents of Oceano felt about fire service and what level of service they wanted.

Now that Measure A-20 has been scrapped, White said the district probably wouldn't discuss its next steps until the final count is announced by the San Luis Obispo County Clerk's Office in April.

Looking forward, the district has options, she said.

"I mean we're going to go ahead and negotiate with the county and see what divestiture involves, I know that, but that will take months and months," White said.

The district is officially out of the Five Cities Fire Authority joint powers agreement—an agreement of services paid for by Arroyo Grande, Grover Beach, and Oceano—but services will be provided by the Fire Authority until June 30, 2021.

"The Oceano Community Services District will be working through the next year to find the best, most economical, most efficient fire protection for Oceano and they will not go without fire protection," White said. Δ