Longtime SLO County resident April Dury is gunning for a spot on the Oceano Community Services District (OCSD) board of directors this November, but a decades-old felony embezzlement conviction is clouding her calls for improved transparency, accountability, and fiscal responsibility. 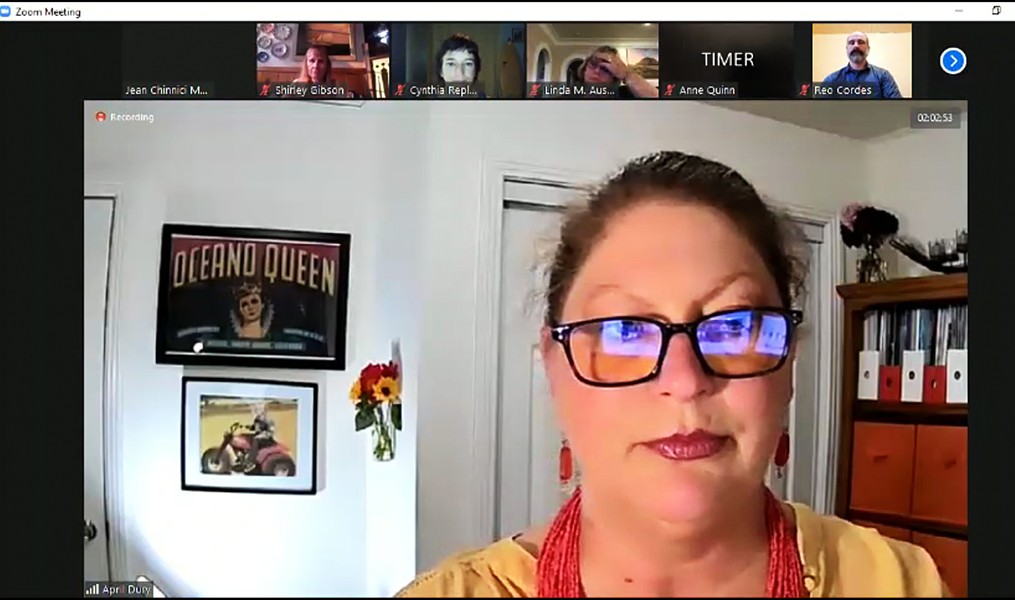 In October 1999, Dury pleaded guilty to a felony embezzlement charge while working as a bookkeeper for an animal hospital in Reno, Nevada. In the plea memorandum, which was provided to New Times by the Second Judicial District Court of Washoe County, Dury admitted to using a nearly $7,000 check from the animal hospital for reasons other than its intended purpose. When Dury was initially arrested and booked into Washoe County jail in May 1999, the Reno Gazette-Journal reported that she was suspected of taking more than $20,000 from the animal hospital that employed her for 18 months.

Dury said she served about a year and a half in prison before she was released on a five-year parole, and, according to court documents, she was ordered to pay more than $37,000 in restitution. The experience, she said, helped shape the better person she is today.

"I've never denied it," Dury told New Times. "I've been completely open and honest about it. It's my past. I made a horrible, horrible decision that I've paid the price for."

Although Dury wouldn't say exactly what went into her decision to steal from the animal hospital—she said she didn't want to attempt to "justify" the crime—that time in her life was a rough patch. Roughly 30 years old at the time, Dury said she was living far from home and had recently gone through a difficult breakup.

"I was literally at my end financially, emotionally, everything," Dury said between tears. "I lived in a different state with no one around for support."

Still, she said, "there's no good reason" for what she did.

After she was released from Florence McClure Women's Correctional Center in Nevada, Dury said she finished out her parole in SLO County. Although a parole officer told her that she could work in the finance industry again, Dury said she didn't think she'd ever get hired with a felony on her record.

Then a friend told her about an opening as a bookkeeper; she applied and was offered the job immediately following her interview. She told the company about her record and, to her surprise, they gave her a chance. She's been working in bookkeeping ever since, and has used her knowledge to point out other questionable financial activity locally.

Dury said she had a hand in the discovery that former OCSD General Manger Tom Gealsen had wrongfully taken more than $30,000 from the district, which he was ordered to give back in 2013, and brought to light similarly shady financing in Los Osos.

"At what point is it my responsibility to go, 'OK, how can I use this for good now? How can I advocate for people who don't understand what I do for a living, who don't see where stuff could be hiding or missing?'" Dury said. "And that's my skill now that I've honed over time and I use it for that."

Dury has been actively involved in local government for nearly a decade, and in this year's election, she's running against incumbents Linda Austin, Shirley Gibson, and Cynthia Replogle, and newcomers Barney Foster and Reo Cordes. Dury said she's served on various advisory committees for the OCSD and sanitation district, she regularly attends OCSD and local City Council meetings, and she's long been frustrated by the lack of transparency among local public officials. The average citizen can't really figure out how local jurisdictions are spending tax- and rate-payer dollars, which is why Dury said financial specialists like herself have had to get involved in the past. Dury said that needs to change.

Voters, she said, should be more focused on the real issues at hand and how she's advocated for the SLO County community in the decades since 1999, rather than one mistake she made at one of the worst times in her life.

"This is my hometown, and I love it to death," Dury said. "The difference is, I don't have any buildings named after me and I didn't inherit $5 million worth of beachfront property. So I'm just a little nobody. But I think that my work so far, even just on an advocate level, and the fact that I can talk issues about the OCSD and the purview of the OCSD eloquently and with back knowledge intimidates the opposition because they can't do that. So what else is left? Throw up a 21-year-old story that has no bearing on today, for the sole purpose of shaming me and or trying to take money from me by me losing clients."

"If I focus on what I did 21 years ago," she continued, "when do I have the permission to continue my life and focus on things that really matter?" Δ