A special meeting about a controversial Oceano fire tax returning to primary election ballots this year appeared to leave residents with a Hobson's choice—vote "yes" on a flat parcel tax that many are calling inequitable, or receive unspecified fire services from San Luis Obispo County.

"We don't know what we'll get if it doesn't pass, and that's true ... because we're not there yet. That's a theoretical position. The county would never say, 'Oh well, let's try to figure out if Oceano's tax doesn't pass,'" said Will Clemens, the Oceano Community Services District's (OCSD) general manager, at a April 30 special meeting. "But they're not going to spend their time on hypothetical things that could happen in a community. So we address issues that come up when they come up." 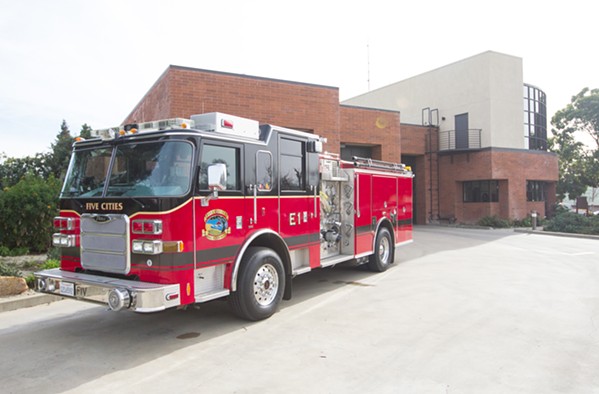 The fire tax, Measure A-22, is a special tax levied on all real property in the OCSD. At $180 per year from each property owner, the fee would help maintain rapid response times for 911 medical emergency and fire services through the Five Cities Fire Authority.

A-22 originally appeared on the 2020 ballot where it received 66 percent voter approval—11 votes shy of the two-thirds majority needed to pass parcel taxes. The OCSD board decided to bring it back this year to "respect the majority's wishes."

Unlike its city counterparts in the fire authority, Arroyo Grande and Grover Beach, the OCSD has limited fundraising options, according to Clemens. The board zeroed in on property tax because other alternatives like sales and cannabis taxes couldn't be collected because Oceano is unicorporated. While the two cities were able to increase the funds they use to pay for full-time fire staff positions, the OCSD struggled to do the same.

If voters finally pass the measure this summer, the money would foot 24/7 services at the fire station, complete with a full-time fire captain, a fire engineer, and firefighters. If A-22 fails again, the OCSD would have to transfer fire service authority to the county, which can provide three days of round-the-clock services per week. But both residents and OCSD board members said they feel left in the dark about the exact nature of county fire services.

Wade Horton, the county administrative officer, said that it would be "premature" to detail a backup plan if the measure fails.

Several residents have reservations about the impacts of the parcel tax. One of them is Lucia Casalinuovo, who voted against the tax in 2020.

"In my opinion, we need to have a distinction between fire emergencies and medical emergencies. It seems to me that we put more money into medical emergency than fire. Why do we call it 'fire tax'? Let's call it 'medical-fire tax' to be honest and upfront," she told New Times.

Casalinuovo is referring to Five Cities Battalion Chief Brian Salce's breakdown of service calls at the special meeting. He announced that the fire authority ran 40,154 calls in 2021. Of these, 631 were in the OCSD. Emergency medical calls comprised 58 percent of those, 33 percent were for public service alerts, 3 percent were to fires, 3 percent to hazardous conditions, 2 percent were false alarms, and 1 percent were miscellaneous. The fact that calls for fire emergencies only made up a small portion raised many eyebrows at the meeting.

"Our health system does not provide a good, affordable emergency care for our people. Instead of calling the ambulance, which should be at a fair price, they call the fire department to take care of medical emergencies," Casalinuovo said.

She added that the parcel tax isn't fair to all OCSD residents, either, given that homeowners and business owners would pay the same amount. The tax amount can also be increased every year, although not by more than 2 percent. An alternative solution, which the majority of the OCSD board rejected, was a proportionate tax that depended on the square-footage of a property.

OCSD Board Member Allene Villa told New Times that she gave a thumbs-down to the alternative because many old lots didn't have proper records of their square-footage.

"That would make it very difficult," she said, specifying that she was speaking in her capacity as a private citizen. "People who have empty lots with no buildings on them, or they don't take care of their lots, there's junk on them and stuff that can cause fires. They also wouldn't be charged because there's nothing on them. Landlords could also shift the costs to renters."

Villa said she sympathizes with those bearing the brunt of the possible inequity, but she wants OCSD residents to favor the special tax because divesting from the fire authority and receiving county services seems murky.

"The devil you know is better than the devil to discover. They're not answering, and that, to me, says a lot, she said. "The county alternative ... the services they're going to provide don't sound like they're up to par with the [FCFA] services to me." Δ