A big white barn just south of San Luis Obispo is ready to start its new life as a pivotal place along three planned bike paths for event hosting and remembering history.

Since 1997, the Land Conservancy of San Luis Obispo County has had big plans for the Octagon Barn off of South Higuera Street, Executive Director Kaila Dettman said. Twenty years and more than $7 million later, the Octagon Barn Center is hosting a grand opening celebration on Sept. 21 with food, wine, and fun for the community from 11 a.m. to 5 p.m.

"The barn itself was basically falling down in 1997, so the restoration has been long term," Dettman said. "It still feels like a cool, old barn. We wanted to make sure it was a space that was open and free." 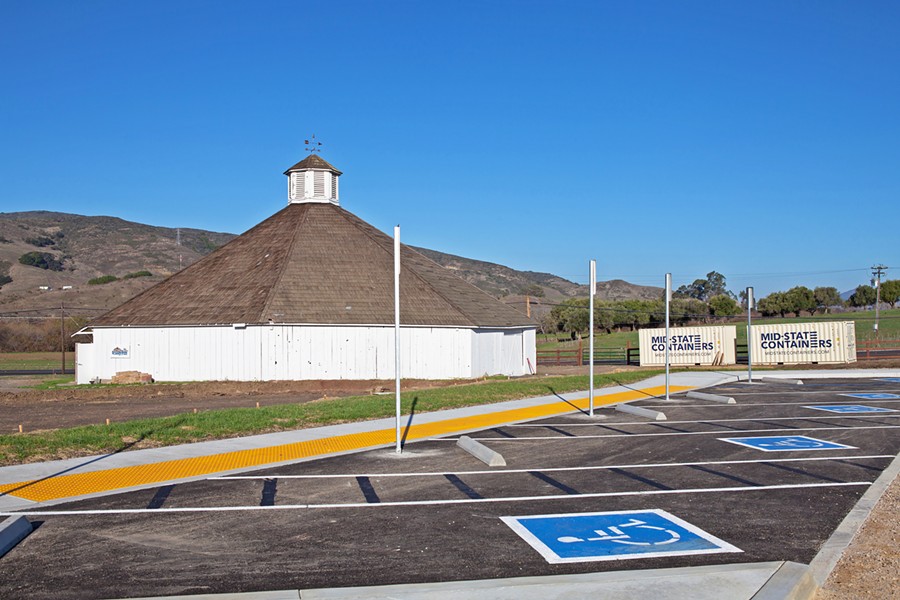 In addition to keeping the barn, which was built in 1906, as true to original form as possible, the Land Conservancy was able to restore an old milking parlor into a "state-of-the-art" event center, build restrooms and an outdoor patio, and pave a parking lot on the site, which it leases from the Hayashi family and CalTrans.

Although the project has been two decades in the making, Dettman said it really picked up steam in 2012, when the Land Conservancy entered into a partnership with San Luis Obispo County to use the Octagon Barn as a staging area for the completed Bob Jones Trail (although, that trail has yet to be finished). With a conditional use permit in hand and the vision for specific amenities all worked out, the conservancy was able to start raising money.

The county and the San Luis Obispo Council of Governments put up more than $2.5 million for the parking lot and a left-hand turn lane off of Higuera. About $1 million more came from a state grant, the city of San Luis Obispo, and additional funding from the county (specifically for the on-site bathrooms). The rest of the money was raised through private donations.

"The vast majority of the grants and the private donations have all been raised in the last eight or nine years," Dettman said. "It was an excellent example of a public/private partnership."

As a staging area for the Bob Jones Trail, the location of the Octagon Barn is key, Dettman said. Land for something like this is limited on that side of town, she said—space for amenities such as bathrooms and a paved parking lot and an event center for fundraisers, concerts, and makers markets. Plus, it's right along the corridor that the Bob Jones Trail will eventually travel to connect the city to sea, San Luis Obispo to Avila Beach.

Two other bike trails are planned to connect with the staging area as well, one on Los Osos Valley Road and one that will go along Buckley Road once it gets pushed all the way through to Higuera Street.

"It's going to be quite a hub," Dettman said. "We want it to be a beloved asset for the community and there's a lot of interest. We're really excited about what it will bring for the community. It's really great to be at this moment."

The Land Conservancy plans to start free docent tours of the barn in 2020, has opened its reservation system for events in 2020, and hopes to have the gates open to the public daily starting the first of the year. Funding is still needed for construction and start-up costs.

Visit the Land Conservancy's website to learn more at lcslo.org.

• Tour tiny houses, skoolies, vans, and more at the Tiny Footprint: Central Coast Tiny House and Net Zero Expo at Madonna Meadows, Oct. 12 and 13. For more information or to purchase tickets, visit tinyfootprintexpo.com ($8 in advance or $10 at the gate).

• Oxford Suites is opening a five-story hotel in Paso Robles with 101 suites and specially designed extended stay and pet-friendly rooms. The location at 800 4th St. was once home to the California Almond Orchards processing plant. Reservations can be made online at oxfordsuitespasorobles.com, and a grand opening and ribbon cutting is planned for this fall. Follow Oxford Suites Paso Robles on Facebook to stay in the loop. Δ