Of coffee and caps

Starbucks isn't exactly synonymous with grassroots social campaigns, but for a local knitting group that emphasizes sociability in addition to social responsibility, it's the perfect meeting space. The Tuesday Night Knitsters began gathering two years ago at Starbucks in the Marigold Center, where group organizer Felicia Kalsch worked. When she got transferred to the Starbucks in downtown San Luis Obispo, the group moved with her. A core group of five or six people meet every Tuesday night from 7 to 9 p.m., with numbers swelling to as many as 20 participants some weeks. 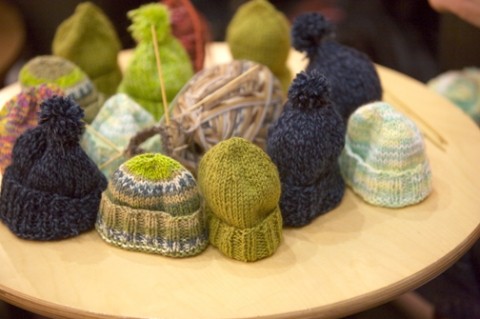 # The group is all-inclusive, welcoming male and female knitters of different ages and experience levels. Up until four weeks ago, participants brought their own projects: hats, scarves, and shawls in school colors and intricate patterns, exchanging advice and praise. Now, they still bring their own projects, but the majority of the industrious knitting-obsessed members work on caps with a 9-to-11-inch circumference: the head size of a newborn in an impoverished country.

"One day we were here, and Felicia said 'We should knit scarves for the homeless or something for a good cause,'" explained participant Marya Bolyanatz.

One knitter happened to have a magazine with an article about Caps to the Capital, a project with a goal of decreasing the number of newborn deaths in developing countries. According to Save the Children's State of the World's Mothers 2006 report, 4 million newborns die within their first month of life each year. Half of these infants die within 24 hours. Seventy percent of these deaths could be prevented by simple measures like training for birth attendants, immunizations against tetanus, and basic care involving drying a newborn baby and keeping it warm. One of the simplest methods of the latter is providing a cap.

All caps must be sent to Washington, D.C., in early January. They will then be sent to several countries, including Afghanistan. The Caps to the Capital project kicked off Sept. 26, and the Tuesday Night Knitsters have already completed well over a dozen caps with the promise of more to come.

"Everybody still has their own knitting projects, but we all committed to buying a skein of yarn and doing as many caps as we could," Bolyanatz said.

Save the Children provided a set of instructions for making the caps, and each one takes about three hours to complete depending on a knitter's experience and skill.

With the holidays approaching, most of the Tuesday Night Knitsters are also busy with individual projects and presents. Friends and family are expecting scarves and hats with a personal touch, and the already-enthusiastic knitters will be working in overdrive. Many of the members knit in waiting rooms and at family functions. One admitted to knitting while walking, and another keeps a project in her car in case her vehicle breaks down and she has some spare time.

"The one thing you don't want to do is drink and knit," Bolyanatz advised. "That makes for some funny knitting."

Bolyanatz also urges beginners not to start out with Fun Fur, because it can make the learning process decidedly less enjoyable. Besides offering advice, the group discusses personal issues like relationships and work. For people with a knitting obsession, it's a good place to get a healthy dose of what group members refer to as "stitch and bitch." The Tuesday Night Knitsters always welcome new members or even someone who just wants to drop by with a knitting question. Immediate access to coffee, a group of friendly knitters, and a good cause: What more could a knitter ask for?