Of females and fowl

Happy New Year!?! It’s Friday, Jan. 1, and the last thing I should be doing is working (or operating heavy machinery), but somehow I find myself parking and walking toward Linnaea’s Café to meet local artist Lena Rushing, who’s works will appear in a show, that opens on Friday, Jan. 8.

She’s waiting out front when I get here, and as we walk in, it turns out Lena and I aren’t the only suckers putting in time on the first day of the year. Marianne Orme, who bought the café from Linnaea—what, three years ago?—is mopping the floor and scrubbing down bathroom doors.

Remember that, those of you who romanticize the notion of owning your own café! It’s not just sipping tea and talking Foucault, Derrida, and Witkinstein with laze-abouts in French berets! The café is closed, but Marianne is romantically applying elbow grease to the très chic stains of pseudo-intellectual coffee spills.

But I’m here for Lena Rushing, a petite, intensely pretty visual artist who leads me around the café encouraging me to feel her canvases, most a combination of acrylic paint and collage.

“I cut out pieces of paper so some of the works feel like a puzzle, and here I applied tissue paper and painted over it,” she says, running her hands over a painting like a high-school boy feeling up his girl in the back of his dad’s Impala.

“Most artists aren’t keen on having people touch their paintings,” I offer.

“People can touch ‘em,” says Lena, “as long as their hands aren’t filthy.” 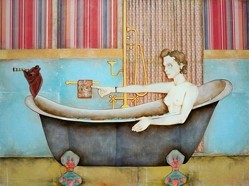 The first thing that strikes me is how big the paintings are, about three by four feet, much bigger than they look in photos. Lena seems to have a penchant for painting elegant looking woman with birds, except for one image of an octopus we pass by on our way to the café’s backroom.

“I love that it’s really organic,” she says, copping a quick feel of her painting. “The arms can twist and turn, and there’s really no wrong way. It feels really free to paint like this.”

Another smaller portrait is so abstracted I have to stare at it for a second before I see the face. Most are carefully rendered, almost fussy, but Lena is no slave to one style.

Then she launches into this little aside about how people are always telling her she’s painting “wrong” because her style is “inconsistent” and people won’t be able to recognize her paintings because they’re all so different, but she doesn’t care.

I note that Picasso obviously ignored that advice too, and then she’s telling me about another painting, again running her delicate hands all over it, the little hussy, and saying how it’s painted over another painting.

“Do you do that a lot?” I ask, sort of falling for her and her recklessness.

“Yeah, it’s good to recycle,” she says, “and I’m cheap. I paint for myself, and I don’t think people are going to want to buy my stuff, but I’ll make a painting and really like it and hang it in my living room for a while and then suddenly I’ll be embarrassed by it, take it down, and paint white paint over it before I change my mind. My paintings are endangered when they’re at my house. They’re much safer here.”

We stop in front of a barefooted woman holding a leashed ostrich, or is that an emu? Doesn’t matter. I wonder if she uses models or are these images out of her head.

“That’s my friend Ursula,” she says, adding she uses photos to work from, “but a lot of times they’re not quite what I want, so I’ll hunt through magazines to find a different nose or a hand in a certain position. I sort of harvest all these pieces and put them together, and then the challenge is dealing with the light sources, since each piece [of the puzzle] is different. Lately I’ve been using models and getting them to pose like I want them, which makes it much easier.”

“So what’s with all the women and birds?” I blurt.

Then she tells me how she painted her son once, letting me know she has a kid. I can deal with that, I think. Then she says, “My husband and I were talking about that and …” Husband? I guess we’re breaking up, the handsy two timer!

Then she continues, “I just think women are so beautiful, their forms and soft faces. They’re already beautiful, so why not paint them? My husband always teases me that I’m going to leave him for a woman.”

If you do, can I go with you? I think but don’t speak. Sometimes you need to know when to shut up.