Of flags, katanas, and tutus

SLO gets a heavy dose of performance art

Rev C. Hite fashioned strips of Chinese newspapers into Taiwanese flags, mounted them on bamboo canes, and planted them in the ground near the creek. When the wind rises, the banners begin to ripple, catching the marriages and funerals enmeshed on paper in a sort of life dance. Sometimes she wraps fabric around rocks at the beach and photographs the sculptured juxtaposition. Her collaborator, Reiku Hiteruo, dips his hand into red paint and delivers a quick blow to a makiwara, a martial arts board used to develop a practitioner’s skill. Sometimes he wears a hakama and chops fruit and vegetables with a katana, a tongue in cheek exercise. And once he carved a clay sculpture with the sword, a whirl of “beautiful motion,” according to Hite, who documents their exploits.

The duo isn’t playing at samurai, although there is certainly a degree of playfulness behind their experimental anything-goes attitude toward art. Their attitude is encapsulated in the challenge, “Dare to Dream, Dare to Create, Dare to Participate,” the theme of the Central Coast 1st Annual International Performance-Installation Art Expo. The mouthful of an event is on display at their ART Zero Executive Gallery through the end of November, but the flag planting and fruit chopping has been occurring for more than two decades and across such dramatic backdrops as Death Valley, the American River, and the Pacific Ocean. 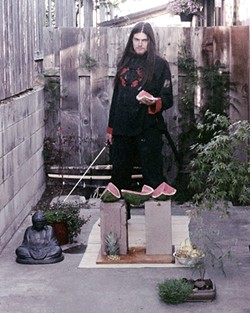 While there’s always an element of showmanship behind Hite and Hiteruo’s performance art, part of their intention is to prove that the scale of the project isn’t always proportionate with the effect.

One of Hite’s projects features what she calls “doodles,” small ceramic pieces in the shapes of x’s and y’s, which she arranges around the Art Department courtyard at Cuesta College. Before beginning, she sweeps the courtyard, a ritual that frequently precedes her work.

“You could take a handful of them in your picnic basket and do them at the beach. That’s sort of a tongue in cheek comment on what is art and what is not. It doesn’t have to be this awesome undertaking of tonnage of materials,” Hite insisted. “Part of the motivation for landscape graffiti is ‘is it art’ and if somebody had to pick it up could I be arrested for vandalism?’

The pair opened The Executive Gallery at the San Luis Business Center in the spring of 2007 knowing that they would not make money but willing to explore the area’s artistic boundaries. Thus far, they are the only creators featured in the performance art expo, with somewhere between 25 and 30 individual concepts translated into photographs, video, and live demonstrations.

The installation, partially funded by an Art Inspires! grant from ARTS Obispo and the SLO County Community Foundation, was timed to correspond with ARTS Obispo’s Open Studios Tour. During the first weekend, on Oct. 11 and 12, Hite opened her sculpture garden to the public for a firing and raku demonstrations, as well as sword-chopped watermelon performances. The following weekend, Oct. 18 and 19, the gallery will be hopping with film, music, visual art, and assorted fundraising events. Inverting the concept of Art After Dark, the Executive Gallery hosts receptions the final Friday of each month as well.

While Hite and Hiteruo are more than happy to continue working, quietly and perhaps oddly, at the periphery of the local arts community, their aim is to incorporate additional artists in their exposition. Hite’s piece, 228, titled after the massacre of Taiwanese citizens by the Chinese military during an anti-government uprising on Feb. 28, 1947, was featured in the Peace Library at ARTS Space Obispo. If two heads are better than one—if being the operative word—it follows that subsequent additions to their experimental conclave could only benefit the quality and diversity of the work.

And one of the best things about artists, according to Hite, is that they’re dependable. It may not be the first word people associate with artists, but Hite’s logic is certainly sound. Her own ability to separate her work as an artist from her financial survival is a defining aspect of the way she perceives and encourages other artists.

“Once I took that out of the equation—will they like it, will they buy it—my whole work changed. I think I have accomplished something over my lifetime that I was meant to do. And they’re artists first. They’ll survive as human beings. Art is part of their make-up. It’s not something you do when it’s convenient,” she insisted. “Art is not a convenience and it never has been. It’s something that artists do.

People may stop and stare in surprise, or even question how art is defined, when they see a pink-tutu-clad Hite floating like a corpse in a river. Or assembling triangular pools in Death Valley, but Hite believes that, whether or not people have words to explain or define performance art, the compulsion to create is what is important. She and Hiteruo are merely providing people with a first-hand account of these experiences and a venue in which to display the products of their own experimentation. If, along the way, they inspire someone else to wield a fruit-menacing katana or construct their own variation of the ceramic doodle, so much the better.

The Central Coast 1st Annual International Performance-Installation Art Expo takes place at The Executive Gallery at the San Luis Business Center through the end of November. The expo will also be on display as part of the Open Studios tour Oct. 18 and 19. The gallery is located at 4251 S. Higuera St., Suite 800 in SLO. For more information visit  www.art-0.tripod.com/ or e-mail ArtZeroOfficial@gmail.com.

Arts Editor Ashley Schwellenbach once was lost, but then she found a map. Send a compass to aschwellenbach@newtimesslo.com.