'Of Mice and Men' explores the loneliness of human existence

By The Sea Productions' take on Of Mice and Men will show in Morro Bay at St. Peter's By the Sea Episcopal Church through Sept. 16. Tickets range from $15 to $20. Visit bytheseaproductions.org for more information.

You can live off a dream. For years and years it can keep you going as the hot sun beats down on your back and you dream of better days.

The futile existence of the working nomad is a tale that beloved Central Coast author John Steinbeck returns to time and again, perhaps most famously in his short story, Of Mice and Men. And on Aug. 24, By The Sea Productions brought Steinbeck's classic tale of two men and their search for connection and home to the stage for its opening night in Morro Bay. 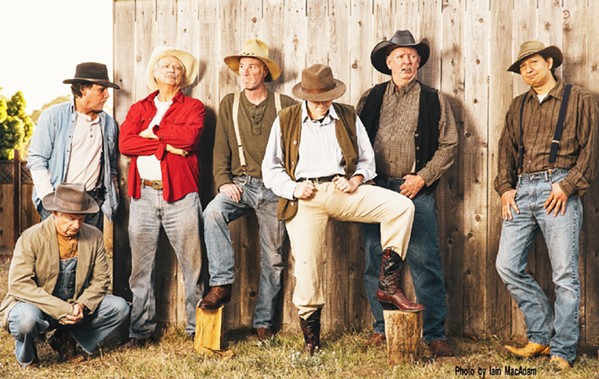 With director Kelli M. Poward at the helm, the cast dove into the 1930s world of displaced migrant ranch workers trying to eke out a living in Central California. In case you missed the read in high school English, our story centers on the world-weary George (Frank Moe, seen in Cambria Center for the Arts' Bus Stop in April) and Lenny (Rick Bruce), who is, as other characters say, big and strong but "not bright." One of the heart-breaking aspects of the story is seeing Lenny try to exist in an era when disabilities and special needs weren't even known, let alone supported.

Moe and Bruce play off one another well, with Bruce bringing a childlike naiveté to his part and Moe countering it with a bitter skepticism. The minimalist set rotates between the riverbanks, the barn, and the men's bunkhouse at the ranch, which is where George and Lenny show up looking for work after Lenny has done "a bad thing" that forced them to flee their previous post in Northern California. Over and over again, George loses patience with Lenny. Still, as George always tells Lenny, "Guys like us, that work on ranches, are the loneliest guys in the world. They got no family. They don't belong no place. ... But I got you to look after me, and you got me to look after you." The theme of connection in a lonely world is revisited with nearly every character in Of Mice and Men.

While the duo is on the run from trouble, they still find more of it at the new ranch in the form of the hotheaded but small Curley (M. R. Hall), who is looking to pick a fight with anyone bigger than him, and his pretty, flirtatious, and lonely wife who doesn't even get a name (Cika Cook). Still, the duo looks to save some money and one day buy a little land to call their own.

Standout performances include Tim Linzey as Slim, the likeable ranch hand. While in his actor bio, Linzey said he has no formal training in acting, he is fully his character from the moment he steps on stage until the final bow. Cook as Curley's wife brings a softness and vulnerability to the woman who the other characters refer to as a "tart."

A single read of Steinbeck's tale could show the woman who doesn't even have a name as a villain in this piece, but under Cook's care, it's clear that she's as much a victim of circumstance as any other character in this story, desperate to find a connection with another human being.

"I never get to talk to anybody," she despairs. "I get awful lonely." Δ