Of permits and pyrotechnics

This Fourth of July, bombs bursting in air and rocketsâ€™ red glare may be in short supply in San Luis Obispo County. Only a handful of local cities allow the use of personal fireworks, and a string of permitsâ€”coupled with costly price tagsâ€”prevent many organizations from hosting large firework displays of their own. 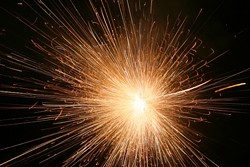 # With the exception of a fireworks show at Cal Polyâ€™s 2003 Homecoming, San Luis Obispo hasnâ€™t hosted a pyro-run display in more years than most residents can remember. SLO Blues Owner Tim Golden has lived in San Luis Obispo for four decades and couldnâ€™t recall ever watching a fireworks display from his own backyard. That all changed, however, when he organized a display for SLO Bluesâ€™ opening game on May 28. Still, his road to celebratory sparks and explosions was a rocky one.

â€œFor the fireworks on opening day, we didnâ€™t have actual approval until 3:55 on Friday,â€? Golden said. â€œThere was a ton of red tape. Weâ€™ve been working on this for years, but it always kind of fizzled out.â€?

To ignite his spark of an idea, Golden signed a contract with Pyro Spectaculars, an organization thatâ€™s provided displays for Disneyland, the Super Bowl, and the Olympics. After dreaming of hosting fireworks in conjunction with a SLO Blues game for nearly 10 years, Golden signed a contract for three firework displays: the first on opening night, the second after the July 3 game, and the final display following the closing game on July 29. Despite the cost, purchasing the fireworks wasnâ€™t nearly as difficult as was obtaining the necessary permits for the city to sanction the display, Golden said.

â€œThis is the first time anyone has ever been through the entire permit process,â€? said SLO County Fire Marshall John Madden. â€œIâ€™ve had requests in the past, but once people find out what it costs, theyâ€™re not interested.â€?

Because the city had never been through the process of approving a permit for a fireworks display, the process required more time and patience from Golden, who was concerned that this yearâ€™s request would fall by the waysideâ€”as it had before. After commissioning Pyro Spectaculars to provide the fireworks, Golden contacted the fire department about safety permits.

â€œJohn Madden was awesome,â€? Golden said. â€œWe just did the walk-through, and he was really cooperative.â€?

The Parks and Recreation Department required that Golden file a special-event permit, and a committee from the fire, police, and parks and recreation departments reviewed Goldenâ€™s permits and insurance information before approving his request. A spokesperson with the Parks and Recreation Department said that Golden had to receive permission from the school district before hosting the display on district-owned property. The school district readily gave permission, but Golden was still surprised by the number of hurdles he hadnâ€™t expected to encounter.

Despite a few minor problems, the first show went off without any significant hitch. Thatâ€™s a relief for Golden, who was concerned that future fireworks would be cancelled if there was a problem during the first spectacular.

â€œWeâ€™re not a huge corporation, so when people saw fireworks, they probably thought, â€˜Golden brought fireworks over the border in Tijuana,â€™â€? he joked.

While some people may have just watched that opening-night show and wondered how Golden pulled off a fireworks display, others called the emergency dispatcher to report gunfire. Because nobody had alerted the dispatcher that fireworks were taking place, there was some confusion about what was going on. Ultimately, everything was resolved, and Golden hopes that his future displays will be patriotically reminiscent of battles for independenceâ€”rather than battles for permits and insurance policies. âˆ†

Independence Day battles
Aside from the SLO Blues July 3 fireworks display, SLO residents had better keep their Fourth of July fireworksâ€”including sparklersâ€”away from San Luis Obispo. The cities of Arroyo Grande, Templeton, San Miguel, Oceano, and Grover Beach may be a haven for refugee Piccolo Petes, but all other cities in the county have banned the use of fireworks by anyone who isnâ€™t a state-licensed pyrotechnic.

Though most police and fire officials plan to confiscate fireworks without issuing a citation, they do plan to take into consideration the types of fireworks and whether theyâ€™re being set off responsibly.

Though fire officials note that fireworks are illegal due to the danger they pose, few cities have recorded serious physical injuries resulting from firework displays in the past few years. That record, however, doesnâ€™t mean that fire departments are willing to legalize fireworks.

Every July 4, police and firemen patrol the streets looking for illegal fireworks. Usually, Madden said, people scatter and hide, creating a scenario that he described as a â€œcat-and-mouse game.â€? Fortunately for the cat part of the scenario, the Fourth of July falls on a Tuesday, limiting weekend celebrations. God bless America. âˆ†