It’s mid-day in sunny San Luis Obispo. You want desperately to be in the stands when the San Francisco Giants sweep the Los Angeles Dodgers at AT&T Park tonight—but you have no car. And it’s a Friday, so given traffic and parking, it’s unlikely you’d make the game in time anyway. 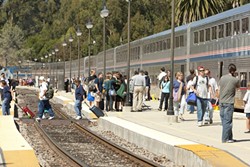 Once you’re through cursing your own lack of foresight, you might also consider cursing the fact that San Luis Obispo hasn’t had a direct commuter train to downtown San Francisco since the ’70s.

Since the historic Coast Daylight route was discontinued in 1971, government folks, Amtrak officials, and long-distance commuters have been decrying just that. Despite the passage of a 2006 bond measure to fund a bundle of transportation projects aimed at relieving traffic congestion and broadening commuting options, plans have been stymied by disagreements between Amtrak and the Union Pacific Railroad, which owns the tracks.

One of those goals: to bring back the Coast Daylight.

Not to be confused with the much-ballyhooed high-speed rail project approved by voters in 2008, the Coast Daylight would provide a direct link between downtown Los Angeles and downtown San Francisco—and San Luis Obispo in between. The Daylight would make the entire trip in roughly 10 hours, once a few key improvements are made in the corridor.

San Luis Obispo commuters currently have to ride to San Jose and hop a bus or ride Caltrain into San Fransisco, or take Amtrak to Oakland and cross back over the bay.

Since then, Amtrak and roughly 20 rail agencies along the coastal corridor have passed resolutions in support of Coast Daylight service and continued to pursue reestablishing the route. However, negotiations between Amtrak and Union Pacific have long been stalled over how much it would cost.

So far, a total of $43 million has been secured for the Coast Daylight project, roughly $25 million of it from 2006’s voter-approved Proposition 1B, and about $18 million from 2008’s State Transportation Improvement Program, which is dedicated toward rail improvements between Carpinteria and San Luis Obispo.

The route became one of the highest priorities for emerging corridors in the state rail plan in 2002, and the project was originally expected to kick off as early as 2004.

According to a CRCC staff report, rail agencies are facing three major hurdles to reestablishing service. First, Amtrak needs the train set. According to the report, the arrival of new California-owned equipment in 2015 should help relieve the current rail car shortage and free up existing equipment.

Second, ridership and revenue modeling completed by Amtrak and Caltrans in 2010 concluded that about $7.5 million in new operating funds would be needed annually for the service, which is expected to increase ridership by an estimated 152,000 trips a year.

In previous years, Caltrans has proposed setting aside funds for the Daylight in its operating budget, but has been denied by the Department of Finance, citing the lack of an agreement with Union Pacific over the rails.

The CRCC is currently on its third draft of modeling, but thus far disagreements between the agency and Union Pacific have centered on the route’s projected impact on freight trains, which take precedence over commuter routes.

Peter Rodgers, administration director for SLOCOG and the county’s go-to guy for the Coast Daylight project, told New Times that securing the actual train for the service isn’t the problem—roughly a billion dollars’ worth of rail equipment will be built in the next two years. However, uncertainty over the state budget and Gov. Jerry Brown’s upcoming tax measure leaves a major question of where the $7.5 million will come from.

“It’s a relatively small figure in the larger scheme of things,” Rodgers said. “It’s not an insurmountable challenge.”

However, the agencies have disagreed with Union Pacific over just how many smaller, “reasonable” capital improvement projects would need to be made along the section of rail to get the route approved, such as updated signaling and other modernizations.

“Right now, we’re really far apart [on our estimates],” Rodgers said. “Our argument is there is a lot of low-hanging fruit, improvements that could be done relatively easily and inexpensively.”

Aaron Hunt, director of corporate relations for Union Pacific, issued the following statement to New Times: “Union Pacific is part of the ongoing conversation regarding the Coast Daylight and has invited the [CRCC’s] consultant to review the Union Pacific modeling process.”

According to SLOCOG Board of Directors President and Paso Robles City Councilman Fred Strong, if the agencies can’t make any progress with Union Pacific within the next three months, the issue may be kicked up to the state Surface Transportation Board, which could enter the process as a third-party arbitrator.

Rodgers said everyone on board is pushing to have the project on track by Spring 2015.