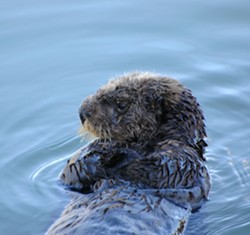 Three wildlife support groups are offering a $6,000 reward for information about the shooting and killing of a female sea otter in Morro Bay.

The otter was found dead near Morro Strand Campground on the beach north of Morro Bay. A necropsy—an animal autopsy—revealed that it had been killed by a pellet gun round to the head. The California Department of Fish and Game said the sea otter was killed between 9 a.m. and noon on June 24.

Otters are protected by federal and state laws. The Humane Society of the United States and the Humane Wildlife Land Trust are offering $2,500 for information leading to the arrest and conviction of the person responsible for the killing. The Defenders of Wildlife have put up $2,500 and the Californians Turn-in-Poachers and Polluters have put up $1,000.