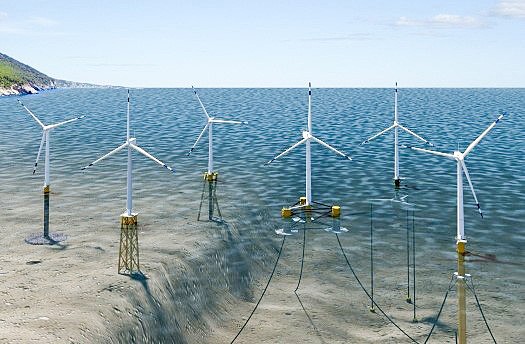 "It sets a number of targets or deadlines for the PUC [Public Utilities Commission] to study and come back with a number of what is feasible to build, in terms of gigawatt capacity," Cunningham said.

Offshore wind energy requires a substation on land to transmit the energy into the state grid. This makes the Central Coast an ideal location, because existing PG&E owned substations in Diablo Canyon and Morro Bay could both be used to connect offshore power to the coast, Cunningham said. As far as where the turbines will be placed, off the shore of Morro Bay is the most likely candidate.

"I've been working for three and a half years with [U.S. Rep.] Salud Carbajal's office, [U.S. Rep.] Kevin McCarthy's office, the Pentagon, the Department of the Interior, to try to get clearance for leasing out that [Morro Bay] ocean space, which is in federal waters," Cunningham said. "We finally got that this year, so the timing is perfect. Now with this bill, we've been able to put into state policy and law for the first time a commitment that California is going to pursue offshore wind power."

With Diablo Canyon Power Plant on the brink of decommissioning, Cunningham said "we don't really have a plan in California to replace that 9 percent of the state's energy grid" that Diablo provides. Wind power could fill the gap.

"We need the power to replace Diablo Canyon's power, and we need to do it in a way that counts as renewable under current state law," Cunningham said.

If the Morro Bay ocean space is leased for wind energy development, "should it get built out to its maximum capacity, it would have space for 3 gigawatts," he added. "Diablo is about 2. So they can replace 150 percent of the Diablo Canyon power."

Though the Morro Bay location has already been approved by the federal government, it would still need to be leased by the private sector. Cunningham said there's already substantial interest from major energy companies.

"It was reported the other day that BP and Shell, and there are others, too, ... are very interested in seeing this thing get built," Cunningham said.

A common misconception is that wind turbines are easy to see from the shore.

"These things are way far out there. They're beyond the horizon," Cunningham said. "Even though they're seven, eight hundred feet tall, ... they're 35-plus miles away. A lot of people are thinking, 'Oh, this is going to be like when I drive 101 in Santa Barbara and I see the oil derricks out there.' No, it's way farther out than that."

Now that AB 525 is law, Cunningham said he will be watching involved state agencies to make sure they hit the deadlines outlined in the bill.

"You just keep their feet to the fire," he said. "Probably half my job is keeping state agencies and bureaucracies in California accountable to the people I represent. ... The need has become so obvious for [offshore wind energy]." Δ