Bees are known for their work ethic, and rightly so. You don’t spawn catchy sayings that start with “busy as a” by sitting around watching Glee and letting fields pollinate themselves. No, you build a hive, you protect the queen, you patrol flowers far and wide, you make honey, and you never settle for status quo. 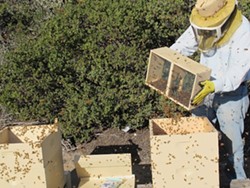 In that entrepreneurial spirit, local representatives of apis mellifera have added a new job description to their résumés: therapist.

“Just watching them is so therapeutic when they’re out in your garden and pollinating,” Martha Van Inwegen said. “For me, it was tranquil.”

Van Inwegen was in the tech industry for 25 years before getting out of that world to start a “wellness-type” company. She launched Life Elements, a sort of holistic umbrella covering various natural products, foods, and lifestyle elements. That umbrella now covers TheraBee, a partnership started with head beekeeper Wade Johnston and creative director Hillary Amborn.

Their collective goal is simple: raise healthier bees and harvest honey while doing it. To that end, they place hives on properties throughout the county, exchanging a share of the resulting honey for a commitment from landowners who agree to maintain a pesticide- and herbicide-free environment, supply renewable water sources, and honor a two-year deal as bee hosts. They’ve placed more than 60 hives so far, and the first honey yields are expected to be available soon.

Van Inwegen used to live in San Diego in a home with a postage-stamp-sized yard, she said. Then she moved to five acres in Atascadero, where she finally had room to pursue a growing interest in bees, sparked partly by her learning about Colony Collapse Disorder, a mysterious and fatal condition that’s been decimating modern hives.

Johnston was an engineer for 37 years before heart problems shifted his priorities. He, too, was aware of problems facing bees, and decided to care more about the planet and its various populations. He made a conscious decision to become a beekeeper. His wife and Van Inwegen’s husband work together, and a random conversation—of the “your spouse is into bees, too?” variety—one day brought the bee-lovers together.

“People eating our honey will get the best benefits of pollen and the enzymes made in this area,” Johnston said.

He visits the different properties once or twice a week and maintains the hive health. And, when the time comes—probably later in May or in early June—he’ll start harvesting honey. A bigger harvest will likely come in late July or August, since this Mediterranean climate encourages hard-working bees to work even harder than their counterparts in harsher regions.

TheraBee will offer a “Honey Hive Subscription Club,” something like a wine club, that will put pure honey into members’ hands practically as soon as it’s harvested. And bee hosts get the added benefit of industrious insects paying special attention to their gardens, orchards, and fields.

Eagle Scout Candidate George Borgardt with BSA Troop No. 322 in San Luis Obispo is dedicating his Eagle Scout Service Project to Military Working Dogs. He’s organized a supply drive and awareness campaign for dogs currently serving the United States overseas. The drive runs until June 9 at Petco in San Luis Obispo and Farm Supply locations in San Luis Obispo, Arroyo Grande, Paso Robles, Santa Maria, and Buellton. Lists of needed supplies—such as dog shampoo, dog goggles, treats, heavy-duty extendable leashes, and collapsible bowls—are available at all locations. Supplies donated in any of the bins will be collected and boxed up to be sent to troops overseas. Borgardt is also collecting funds to ship the care packages, which cost $13.50 each to send. For more information, e-mail supplies4k9soldiers@gmail.com.