Oh, I'll tell you where to put it 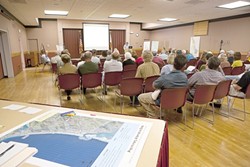 A woman eyed one of half a dozen poster-board displays perched in the Morro Bay Veteran’s Memorial Building.

“I’m confused,” she told the man overseeing that particular station. “What do these pluses mean?”

The man responded: “The pluses have no significance.”

The woman was trying to make sense of a poster that outlined potential sites for a new sewage treatment plant and the potential problems with each site. However, such problems were marked with a plus sign, almost making it seem as if the current preferred project site had the least amount of issues. But the reality is that site has a lot of hurdles to overcome.

This was just one scene that unfolded as Morro Bay and Cayucos residents attended a two-day workshop to discuss alternative sites for a planned Morro Bay/Cayucos sewer treatment plant upgrade.

The two communities have been working to upgrade the current treatment plant under order from the Central Coast Regional Water Quality Control Board. Early this year, the project was appealed to the California Coastal Commission and accepted mainly due to an inadequate review of alternative sites, according to commission staff. As designed, the project lies in a 100-year flood zone and Coastal Commission staff, commissioners, and local residents have complained that project officials didn’t explore enough site options.

In response, local officials from Morro Bay, Cayucos, and Dennis Delzeit, a consultant acting as project manager, hired Santa Barbara engineering firm Dudek to perform the alternative sites analysis. Dudek has so far outlined eight potential alternative sites and is in the process of determining whether those sites have any “fatal flaws,” provide the potential to recharge groundwater levels, and are properly zoned for a treatment plant.

The workshop held on June 27 and 28 was the first step in a three-phase analysis. The next phase will be a “fine screening” of the alternative sites, followed by a final proposal to be presented before the Coastal Commission, likely sometime in spring of 2012.

Resident Linda Stedjee called the current site “a site that is so utterly and ridiculously unsuitable that it seems they couldn’t find a worse one if they tried.”

Though the workshop is very preliminary, residents on the second day highlighted a plot of land owned by Chevron as a better alternative to the current site.

If the current site is rejected by the Coastal Commission, the design would go back to the drawing board after about $1 million has been spent toward the estimated $34-million project.