Oil and water mix well enough in the Arroyo Grande Oil Field that Freeport McMoRan continues to drill ever closer to the next phase in tapping its mineral resources along Price Canyon Road.

The company hasn’t completed the fourth phase of its oil well drilling expansion yet, and planning for the fifth phase is underway, pushing toward release of a draft environmental impact report on the new project sometime in 2016. This next phase calls for the drilling of up to 450 new oil wells, 100 of which would be replacement wells and some of which will be cyclically steamed wells. 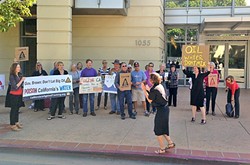 Phase four won’t be finished until the company drills the remaining 31 wells of a 95-well project approved in 2005. The SLO County Planning Commission approved a three-year extension for the project’s conditional use permit—originally approved for a 10-year life—on Nov. 12 after an hours-long hearing focused on water, oil, and geology.

Commissioner Eric Meyer, whose district contains the project, led many of the questions directed at hydrogeology experts from the county and the Regional Water Quality Control Board. His major concern: “water that wasn’t formerly polluted becoming polluted.”

Water’s always been an issue, and its importance heightened during the drought. Geology questions surfaced as a major issue after the California Department of Conservation—which oversees the Department of Oil, Gas, and Geothermal Resources (DOGGR)— discovered that thousands of injection/re-injection wells it permitted were actually being drilled into “non-exempt” aquifers. Those aquifers are covered under the Safe Drinking Water Act because they’re considered to contain drinkable water. Between 70 and 80 of Freeport McMoRan’s Arroyo Grande Oil Field Wells were on the list of 50,000 wells in California that needed to be reviewed. None of those wells, however, made the list of wells that needed to be shut down due to groundwater contamination concerns.

In fact, Freeport McMoRan applied to extend the area of its aquifer exemption, and DOGGR held a meeting in San Luis Obispo in September where protesters showed up and residents pleaded with DOGGR not to grant the request.

Although the state agency hasn’t made a decision, all signs point to it happening.

Both the State Water Control Board and the Regional Water Quality Control Board agree with Freeport McMoRan and DOGGR that the Arroyo Grande Oil Field, also known as the Pismo formation, doesn’t contain any drinkable water.

And they also agree that the liquid contained in that particular area isn’t going to migrate because of the geological formations that hold it in. The region’s been pressure-tested, and everything seems to be fine; sentry wells (essentially, test wells) in the area show the water is as it should be.

“All of those tell us that there is an effective barrier around this,” county hydrogeologist Dan Tormey said at the meeting, adding a caveat. “As a scientist, I’m required to tell you that there’s very few 100 percent, absolute nevers in science.”

A fault separates the Pismo formation from the basin beneath the Edna Valley. Residents on one side of the fault worry that it’s not enough, that it doesn’t run far enough, that water could slip through in the event of an earthquake and contaminate their clean water. Meyer actually worries that the water could go in the other direction: from clean to dirty. Freeport McMoRan is pulling so much water out of the basin, Meyer questions whether the pressure could basically suck clean water in from the other side.

“That worry went away the more we talked and the more I understood the facts,” Meyer said at the meeting. “A well on the east side has great clean water and a well on the west side has sulfur water, bad water, and they’re just meters apart.”

But the lack of a 100 percent guarantee, and assumptions based on scientific theory do give Meyer something to worry about, he said. Unfortunately, this particular hearing wasn’t the place to get those concerns allayed, he told New Times.

The commission was only voting on whether to extend the conditional use permit already granted to Freeport McMoRan. Meyer said the commission could only deny the extension if new information—not contained in the 2005 environmental impact report—came up, giving the commissioners factual reasons to deny the permit.

Thus, the commission delayed a vote on the matter twice. The Nov. 12 meeting picked up where the commission’s Oct. 22 meeting left off, when a vote on the extension was delayed over concerns about possible groundwater contamination. Meyer said he was worried that too much water was being pumped out of the ground. That Oct. 22 hearing was a continuation of a September hearing, when the commission delayed the vote to gather more information about traffic and noise concerns.

Meyer told New Times he tried to challenge every angle he possibly could. In the end, Meyer was the one that made the motion on Nov. 12 to approve the permit extension with conditions. Those conditions include a monitoring program—well testing for neighbors in Price Canyon and the drilling of more sentry wells—and a stipulation that the county be involved or have a voice in decisions made by the regional water board and other regulatory bodies with regard to the project.

“It was really weird vote for me. I don’t know if that makes sense, but it’s really hard,” he said, adding that he could see that the votes were lining up in favor of the permit extension. “If I was just to vote no against the oil field because of my own personal beliefs, … what happens is I don’t get to guarantee that the neighbors next door get protection.”

He said the upcoming draft environmental impact report for the next phase of Freeport McMoRan’s oil drilling expansion project is a good place for the county to thoroughly look into all the geology surrounding the Pismo formation, so the assumptions about the way liquid moves underground can be better understood by all.