When Jonathan Yeh goes out to dinner, he faces a common conundrum. He usually wants something satisfying and hearty, while his wife, a vegetarian, is more apt to order the quinoa-kale salad with nutritional yeast dressing. Jonathan has nothing against clean eating, but he—like so many of us—finds himself yearning for a second meal after he’s dined at a so-called “healthy restaurant.”

There had to be a better way—at least, that’s what Jonathan and his culinary-inclined friend In Lloyd have always believed. Now, thanks to their new restaurant, Oki Momo Asian Grill, that decades-long food fight can come to a ceasefire. 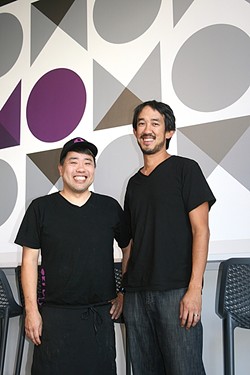 Opened about two months ago, Oki Momo is a place where vegetarians, vegans, gluten free folks, and carnivores can all get what they want without feeling jipped. Sweet, spicy, crunchy, meaty, and fresh come together with fast service, at-the-counter ordering, and clear indications of what’s “vegan,” “vegetarian,” or “gluten free.”

“I remember the first Thanksgiving I tried to cook for my wife and our friends in Seattle,” Jonathan said. “There were a couple of vegans, at least one or two gluten free folks, one person who wasn’t eating refined sugar, and a few Taoists who didn’t eat onion or garlic. I could have done toast with vegan spread on it, but we came up with an assortment of creative dishes. In a way, that experience has really led up to this current menu.”

Although Jonathan said the concept for Oki Momo sprang from a “fast casual” business model, the fare is far from fast food. During my interview, I noticed two employees sitting in the dining room hard at work: One crafted pork and shrimp wontons by hand while the other pulled the stems off a tub of fresh microgreens.

“Everything is grown here on the Central Coast, so it’s not hard to do local,” Jonathan said. “Three quarters of our stuff is locally grown, and we do our best to source our food organically. The main point here is to offer up healthier food at a price point that is available to the masses.”

The idea for the restaurant came together about two years ago, when Jonathan’s neurosurgeon brother, Dr. David Yeh, decided to move his practice from Mississippi to SLO.

At the time, Jonathan was practicing law in Seattle, and was ready for a change of pace. So, he packed up his family and moved to SLO with the goal of managing his brother’s practice and possibly starting a new business venture together.

“We had always shared this idea of doing a little teriyaki style restaurant,” Jonathan said. “It was funny, because when David called to talk about making that dream a reality, I was just about to call him up and say the exact same thing.” 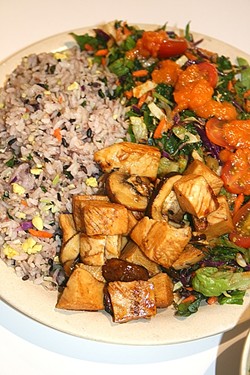 This is where Lloyd, Jonathan’s old college roommate from his days at the University of Georgia, comes in. In the ’90s, Lloyd worked as head chef at a Japanese Hibachi-style steakhouse (Yes, Lloyd can do all that “crazy stuff” with the knives, but only if you ask him nicely). The two students became fast friends.

“We both really liked that kind of Japanese steakhouse food. It’s simple and not overly heavy,” Jonathan said. “I mean, teriyaki is basically sweet soy sauce. What’s not to like about that?”

In 2000, Lloyd opened his own restaurant in Athens, Ga., focusing on serving up Benihana flavor in a fast, to-go context.

“Oki Momo is the evolutionary process of that restaurant,” Lloyd said, adding that he’s pulled from a mix of ethnicities and techniques over the years. “In the beginning, I learned a lot from an older Japanese chef who had studied in France and was very hands on. It was like karate kid. He’d make me cut 50 pounds of onions then throw them away. It was very detail oriented stuff.”

Lloyd’s special “Momo sauce” is a creamy, yellow-hued riff on the popular Hibachi favorite. The original concept for Oki Momo began as a true meat-centric venture, but that changed drastically once Jonathan’s wife took a look at the proposed menu. 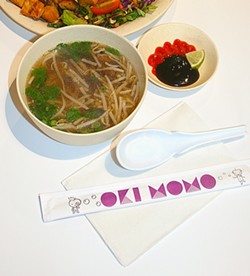 “She said, ‘You can do that if you want, but I wouldn’t want to go there,’” Jonathan said. “The current menu reflects the problems we still experience, and a lot of couples experience, when dining out. You go to a place and they usually have one vegetarian option or one salad with a basic dressing. Even at a fine dining place, you’re usually stuck with the mushroom risotto.”

With this problem in mind, Lloyd, Jonathan, and David put their heads together and tried to picture all facets of the food world dining together. What would it look like?

The resulting menu paints a vivid picture. There’s a “Bahn Momo” sandwich with daikon, carrot, pickle, cucumber, cilantro, and momo sauce served on a choice of gluten free corn tortilla or Dutch Crunch baguette. Meat lovers can order the Kolbi steak or chicken version of the sando, while herbivores can opt for the mushroom and tofu “oyster” sauce.

For the soup fantatic: Get in on David’s beef pho or order the yellow curry lightly stewed with potatoes, baby corn, and rice, then topped with a choice of chicken thigh or tofu.

It’s not peace on earth, but it’s a start.

“Oki Momo is all about offering up a mix of ethnicities, flavors, and options for everyone,” Jonathan said. “I know they say you can’t make everyone happy, but we’re trying.”