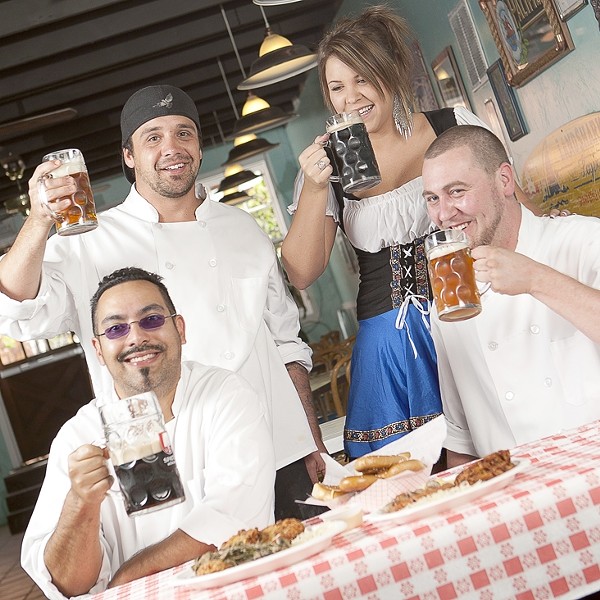 What happens when traditional German foods merge with California casual food at Hoagies in Avila Beach? You get sausage and sauerkraut with a twist. Or, as Hoagies chef Shawn Swink put it: “I like my kraut a little more juiced up.”

In an e-mail that snagged my attention, I discovered Hoagies will celebrate Oktoberfest, just as the now-closed Old Vienna did for the last 18 years. This news will delight the hundreds of Central Coast locals who said they never missed Oktoberfest at Old Vienna. Now, you won’t have to miss the fun of feasting on bratwurst and chugging down fresh, German-style Marzen—not to the mention joining everyone for the chicken dance and polka.

Hoagies Avila Beach plans to kick off Oktoberfest by offering the classic German foods—two dinners for the price of one on Friday, Oct. 1—but this deal is one night only. If you can’t make it the first night, don’t worry; Oktoberfest will be celebrated at Hoagies Avila Beach every Friday and Saturday night through the month. But don’t go to the original Hoagies in Pismo Beach for the Bavarian celebration; it’s only going on at the Avila Beach restaurant.

Besides the traditional dinner, they’ll have fresh Oktoberfest by Samuel Adams on tap, available at lunch and dinner all month long. During the weekend, cute girls decked out in dirndl (Bavarian folk costumes with tight bodices, scoop necklines, and gathered skirts) will keep those frosty mugs coming your way.

Most locals, it seemed, hated hearing the news that Old Vienna restaurant in Shell Beach had closed down. The Reithofer family celebrated its last Oktoberfest in 2009. It was the one month of the year when the place was packed every weekend. Sadly, it wasn’t enough to help them survive a low turnout the other 11 months of the year. When Old Vienna was closing, Shawn was hired at Hoagies Pismo Beach by owners and managing partners Jason and Kasey Joseph and Nick Stieb. Shawn said Jason came up with the idea of celebrating Oktoberfest at Hoagies. Shawn knew he could prepare the German foods he had learned to cook while working at Old Vienna. But rather than copy the Reithofer family’s recipes, he took traditional German recipes and gave them his own unique twist.

The Oktoberfest parties will take place every Friday and Saturday evening in October with two seating times, at 6 and 8 p.m., for just $25 per person for dinner. Beer, wine, and drinks will be priced separately. The chef’s German entrées include jaeger schnitzel, swine schnitzel, Hungarian goulash, a brat sausage plate, or Oktoberfest huhn (half-chicken), all served with steamed vegetables. The choice of side dishes are German potato salad, mashed potatoes, or potato pancakes with applesauce. For dessert, a traditional German chocolate cake will be served. If you know the Bavarian tradition, you know it’s a huge meal. A DJ will play a variety of music, with everything from the polka and folk dancing to the chicken dance. They’ll also have live music on Saturday night, Oct. 23.

At Old Vienna, I learned about “schunkeln,” where guests at tables lock arms and sway from side to side in time to the music. They described it as: “A great ice breaker, and impressive to behold when practiced in large numbers.” I hope people are daring enough to try it.

Besides the Sam Adams Oktoberfest Marzen, the eatery will give away memorabilia courtesy of the brewing company. Hoagies will offer German beers by the bottle, among the 30 different beers normally available here. They’ll have a bar open to provide blended drinks like Long Island iced teas, margaritas, and local wines.

“People love the potato pancakes so much we decided we had to try doing them,” Shawn said. He recalled his experience cooking at Old Vienna, and explained that he doesn’t need a recipe: “I can tell by the feel of the mixture when it has the right amount of red potatoes, green onion, bacon, egg, and flour.” His sauerkraut is simply white cabbage, with caraway seed, garlic, and Pinot Grigio, the latter his choice because it’s not too tart.

“German food is very simple considering how complicated it is to prepare,” he admitted.

If you aren’t familiar with Hoagies, it opened in Pismo Beach six years ago. Last May, it opened a second location in Avila Beach near the community pool. But it has grown far beyond a sandwich shop, and now offers breakfast, too. According to Kasey, they started out making healthy sandwiches priced from $6.99 to $8.99, but the menu evolved rapidly, and soon they were offering salads, fish and chips, and tacos. Before partnering up with Nick Stieb, who previously cooked at Splash Café, Kasey worked part-time in the kitchen.

“After only a few days, Nick was drawn in and quit Splash to work full time at Hoagies,” said Kasey, whose 16-year-old son Jordan Joseph is also one of their cooks. “Nick became a valuable asset to our restaurant. He bought in both mentally and financially, and became our partner,” Kasey said. “Nick talked us into adding fries, and we found that people really wanted to eat fries.”

The Avila Beach restaurant had pizza ovens, so they added hand-tossed pizzas to their menu. Hoagies Avila Beach offers a $2 beer special daily, and features happy hour from 4 to 8 p.m. with half-priced appetizers. You can dine inside the long dining hall where they serve your food, or alfresco near the pool. Reservations are strongly recommended for all five Oktoberfest weekends.

“We try never to put anything out that’s mediocre,” Kasey concluded. “Our goal is to make you say, ‘That’s the best I’ve ever had.’” ∆