Just south of SLO, the town of Edna exists much the same as when it sprang up more than a hundred years ago. Among the old clapboard homes and budding vineyards that dot the landscape is a little slice of SLO-Town history. Built in 1906, all but abandoned 70 years later, and revived in 1998, the old tin building that was once the hub of Edna is seeking to reclaim its former status. With dedication and a little help from her friends Pettia Torrance, affectionately called "The Mayor," has transformed the old Tognazzini farmstead into a charming daytrip destination.

The Old Edna Deli not to be confused with the Edna Market is joining the established Suite Edna bed and breakfast, the Old 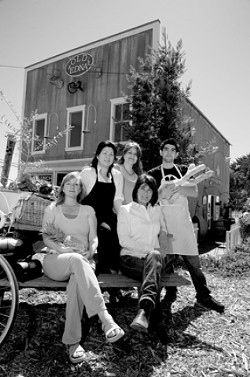 # Edna Antique store, and perhaps the coolest tree house on the Central Coast on the Tognazzini compound.

A trip to the deli takes about a half hour by bike from the heart of SLO. If the weather's good and you've got a little time, Old Edna is a perfect place to find a ready-made picnic, or to stop in to break up an afternoon of wine tasting. Kim Frederick, who runs the deli and created the menu, said that it was developed with two things in mind: what kinds of food go well with wine, and the kind of food she likes to eat. Frederick took cues from a few Edna Valley vintners on what they like and came up with a menu that's both classic and delightfully modern.

The deli boasts a solid carte du jour with gourmet meats and cheeses, fresh fruits and veggies, and even a great veggie sandwich. Each of the sandwiches is named after one of the Tognazzini kids, and all are served on fresh-baked bread. Delicate dressings and orange zest bring out the full flavor in simple salads all made from fresh ingredients. And the two-acre site offers some great opportunities for outside seating by the creek, out on the lawn, or under a patio umbrella.