Old had promise but is ruined by a final act twist

Writer-director M. Night Shyamalan (The Sixth Sense, Split) adapts Pierre-Oscar Lévy and Frederick Peeters' graphic novel, Sandcastle, for the big screen. The thriller focuses on a family on a tropical holiday who discovers the secluded beach they've visited is causing them to age rapidly—their entire lives slipping away hour by hour. (108 min.) 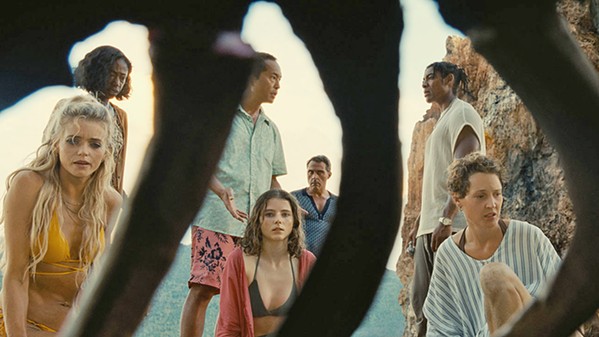 Glen I'm not quite sure why I keep coming back for more M. Night Shyamalan. He's disappointed me so many times. I never saw his first two films, but when The Sixth Sense (1999) came out, I was floored! It was so great, and that final act twist was a revelation. Unfortunately, Shyamalan seems to have chased that success ever since with the same trick up his sleeve though he's never re-created the power of The Sixth Sense. I've seen most of his subsequent films and ... meh. They're well made and interesting but always end with a groan. In this case, he's adapting a graphic novel to the big screen, and I'm guessing he picked the story because—you guessed it!—a big final act twist. The film would have been far better without it. Like most of his films, the premise is promising. Guy (Gael García Bernal) and Prisca (Vicky Krieps) have brought their two kids—6-year-old Trent (Nolan River) and 11-year-old Maddox (Alexa Swinton)—to a tropical resort. The couple is trying to pretend everything is fine, but it soon becomes clear their relationship is on the rocks. At the encouragement of the resort manager (Gustaf Hammarsten), they agree to a day trip to a secluded beach, where they find a few other people: hip-hop artist Mid-Size Sedan (Aaron Pierre); another couple named Jarin (Ken Leung) and Patricia (Nikki Amuka-Bird); and a doctor named Charles (Rufus Sewell), his trophy wife, Chrystal (Abbey Lee), their 6-year-old child, Kara (Kyle Bailey), and Charles' mother, Agnes (Kathleen Chalfant). Fast aging, horror, and weirdness ensues.

Anna The premise is interesting enough, and I don't mind the progression the film took, but the very Shyamalan final act twist left me groaning too. The story didn't need it—and while I know this is based on a graphic novel, it feels thrown in at the end to inspire shock. The performances are laudable. I especially enjoyed young Nolan River who played Trent as a child—an odd yet endearing and curious 6-year-old—and Rufus Sewell as Charles, a pretentious doctor who we soon find out is battling his declining mental health and becomes violent. If they would have left off the final act and wrapped things up a bit differently, I think I would have enjoyed this flick more, but maybe that's just my taste. The core beach group is soon joined by nurse Jarin and his psychologist wife, Patricia, who realizes that there must be some sort of group psychosis going on and tries to connect the dots on what they all have in common. They're trapped by some sort of force field that won't let them escape the beach by land or sea, and as the children start to rapidly age and grow, they realize that half an hour of their time is like a year of regular life. I was excited over the premise of this film, and while I did for the most part stay engaged, I hope Shyamalan doesn't continue to rely on that final ending twist for all of his future movies—it doesn't do every film a favor.

Glen I agree, the acting was good, especially from teens Trent (Alex Wolff) and Maddox (Thomasin McKenzie), who though they're racing through puberty still have the minds of children. Because time is sped up, injuries heal quickly. Cut someone and the wound seals and is replaced by a scar—this can be both a positive and a negative. If you've seen the trailer, you know there's a lightning-fast pregnancy and decomposing corpses floating into swimming children, which are both disturbing, but other moments are even more horrifying, especially a scene with calcium-deficient Chrystal, whose bones break and set themselves into a twisted grotesquerie. The film manages to conjure moments of authentic emotion—Guy and Prisca are going through a lot and realize their love remains intact, and Trent and Maddox soon understand they have only each other to rely on. I might have come away liking this film and some of its soulful musings had it not made its last-minute pivot into another groan-inducing twist.

Anna Agreed. In fact, I can immediately think of no fewer than three ways to end the film that would have been better for me as an audience member. Yet we know Shyamalan and his usual tropes, and he doesn't stray from them—so what was I expecting really? The teenagers were great, and honestly the whole ensemble did a wonderful job and kept the tension palpable. Personally, I loved seeing Ken Leung back on an island with weird time twists happening because I'm a huge fan of Lost, and his character Miles was living through weird island/time/mystery moments there as well. I feel like Shyamalan is like a kid in a candy store, and even if you tell him he can only pick three things, he's still going to put his hands in every jar and stuff his pockets full—do us all a favor and pick a few things to do with your film, not all of them! There's a lot that I liked here, but it's a case of just pushing it a little too far. It's entertaining enough for a matinee or to catch at home, just don't be surprised if you find yourself groaning at the end like I did. Δ