Josephine Crawford puts on a show of haunting white faces

Josephine Crawford’s series of face paintings began when a restaurant owner in Phoenix, a fan of her work, asked her to sketch faces onto the walls of his business. He wanted her to paint the faces quickly, without sketches or planning. She internalized this working method over the next five years, quickly creating a series of 40 or so paintings, crowded with faces that rapidly emerged from the tip of her paintbrush. Crawford created and finished the series during the 90s, but some of the paintings are being given new life via an exhibit at Gallery at the Marina Square, “Reality Show” on parade through Feb. 27.

“They’re kind of macabre in a way,” said Crawford of her faces. And they are, placed together in such a way that the canvas looks too small to contain so many beings. Often, their faces are grotesquely white, lips too red, calling to mind Batman’s psychopathic Joker. There’s undeniably a comment on the human condition, though Crawford prefers to leave the interpretation to the viewer. Though Crawford is not an abstract painter and, in fact, insists that she is incapable of painting within that genre, this particular series emanates an abstract quality that gives its audience a greater stake in deciding what it all means.

The artist, who has been painting for 30 years, is self-taught. Color theory makes no claim upon her art. Her blanched faces came into being through happenstance.

None of the faces were plotted out in advance, or modeled after the visages of friends and acquaintances. Crawford starts out with a square, which she fills with circles that will become people. Some are set in a library or café, or crowded so tightly together that there’s no space for a setting of any kind. They talk, read books, share secrets, look at laptops, consume wine, all in a style that is striking as vaguely vintage art nouveau. A few favored figures are embellished with jewelry, earrings, or hats accentuating pink cheeks and purple eyelids.

Adolph Hitler, Mother Theresa, and the artist’s own mother have all made accidental appearances in the work. When she finishes a painting, mostly oil pastel, she recognizes unexpected relationships between figures. 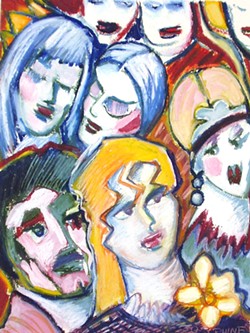 Crawford started painting after concluding her career as a professional dancer in Las Vegas. Though her life has always centered upon art, painting was a secondary pastime to dance. Art, in general, was her life and she found herself working as a costume designer in order to maintain her ties to theater and dance. Crawford didn’t know how to sew when she was hired for her first gig designing costumes, but that didn’t matter as much as the job’s proximity to the theater.

When Crawford moved to SLO she asked herself her favorite question: now what. The answer was a happy one for the local arts community.

A prolific couple of decades later and Crawford’s house/ studio resembles an untidy museum, teeming with paintings of all sizes and subjects. Her most recent body of work earthily combines dirt and flowers and birds. Though she is drawn toward large-scale works, the onslaught of years has robbed her of her ability to vault nimbly between ladders, as she once did. So, she started painting on a smaller scale.

Crawford likes to create rules for herself while she paints, often a mandate that she cannot alter a painting or a specific quantity of paintings that she must generate for a particular series. Many of these rules may strike the casual observer as arbitrary. For instance, she decided that she would paint 100 portraits of friends and acquaintances, some of them fellow artists. But none of these rules can dictate inspiration. The series on display at Gallery at the Marina Square can’t be continued.

“I did them so quickly,” she said of the 40 or so paintings in the series. “It lasted about four or five years. My husband likes them a lot. A few months ago he asked why didn’t I do more. The weird thing is, I can’t do them now. It was like it wasn’t the right time anymore.”

The images are priced not by square inch as many a rational painter has been wont to do, but based on the artist’s attachment to the piece. Also, in a fortunate turn for those whose love of art extends beyond the capacity of their pocketbooks, for the first time in all her years as a painter Crawford created prints of her work, which can be had for a mere $40 or so. It’s a transition for the artist, who previously held prints in low esteem, but one she is now happily making for her “Reality Show.” Being commercially marketable has never come close to matching the appeal of painting what she wants when she wants to paint it.

“I’m completely freaking hopeless,” she admitted. “I say the wrong stuff and I can’t do computers properly.”

Of course, the impulses that make it difficult to market herself as an artist likely stem from the same well of creativity that gave birth to her haunting faces. ∆