On a high note: Cambria Film Festival wraps up at Hearst Castle

For information and updates on the 2019 Cambria
Film Festival, visit cambriafilmfestival.com.

Just as the sun started to dip over the hills of San Simeon, we made our way up the winding Highway 1 on Feb. 11. Nary a zebra was in view tonight as we make the turn for Hearst Castle.

With Valentine's Day just days away, one would be hard-pressed to find a more romantic spot on the Central Coast than the castle, and the founders of the first ever Cambria Film Festival agreed, which is why the closing champagne gala and awards ceremony is being held at the movie theater on-site at the state park. In politically divisive times such as these, festival organizers decided their event would center on something we could all agree on: love. Every film screened over the weekend touched on matters of the heart in one way or another.

When my boyfriend and I step into the lobby outside the theater, the place is bumping as festival attendees sip champagne, nibble bites catered by Linn's of Cambria, listen to the guitar duo playing in the corner, check out William Randolph Hearst's old truck, or take a novelty photo in front of the festival logo.

We spend some time chatting with other attendees about their favorite films of the weekend before we're ushered into the screening room, first for awards and then a screening of Going Hollywood, the 1933 black and white film starring Marion Davies and Bing Crosby. For decades Davies was Hearst's mistress, so choosing to screen this film is a nod to their (admittedly adulterous) romance that took place in the castle just up the hill from where we're sitting now.

While many of the filmmakers being honored aren't present tonight, a few are. It's nice to see cool lady filmmakers like Shilpa Krishnan (There's Always Tomorrow) and Deborah LaVine (Wild Prairie Rose) being honored locally amid the turbulence of the #MeToo movement in Hollywood. 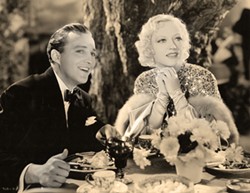 After the awards are presented, a Hearst Castle tour guide takes the stage to chat a little more about Davies and Hearst. Interestingly enough, Hearst poured money into the previously bankrupt Cosmopolitan Productions after falling in love with Davies and hiring her on the spot. While many say he made her career, others claim that Davies' ties to Hearst held her back as an actress.

Still, Davies made the transition from silent films to "talkies" and was even listed as a screenwriter on some of her films, including Going Hollywood.

The lights dim and the credits roll and we're whisked away into the world of Sylvia Bruce (Davies) who, inspired by the singing of Bill Williams (Crosby), leaves her job as a French teacher in New York City and heads off to Hollywood to chase after Bill and falls into an acting career. Sure, Davies' character is essentially a stalker who has not thought things out, Crosby's Bill hits the sauce a little hard and is a womanizer, and there's also an unfortunate scene of Davies in blackface (oh, the 1930s). But when the camera zooms in on Davies staring dreamingly at Crosby as he croons ever so sweetly, it's easy enough to bask in the warm glow of love, however cheesy and improbable it may be. Δ

Arts Editor Ryah Cooley is here for all the slightly cringe-worthy rom-coms at rcooley@newtimesslo.com.