Starting on Friday, Sept. 21, the manuscript for writer Jack Kerouac's seminal 1957 fictionalized but autobiographical novel On the Road will be on display and open to the public at the SLO Library. It's perhaps the most important Beat Generation artifact in existence, one surrounded by mythos. On the Road was purportedly written on a 120-foot-long roll of paper in a 20-day coffee- and Benzedrine-fueled flurry. 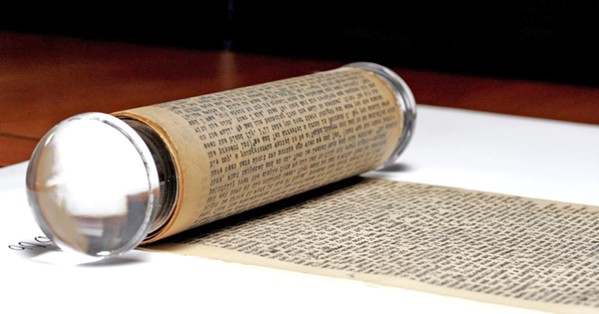 "That's not writing, it's typing," Truman Capote devastatingly sneered as a putdown to On the Road. Capote, the celebrated author of In Cold Blood and Breakfast at Tiffany's, was half right, but not in the way he intended. He meant to take issue with Kerouac's innovative "bop spontaneous" writing style, not the purported speed at which he wrote the book or the medium upon which it was recorded.

Kerouac could type 100 words a minute, and he frequently wrote onto rolls of paper so as not to impede his flow by having to change sheets. But the idea that Kerouac, who lived briefly in San Luis Obispo in the spring of 1953, gave birth to On the Road in one burst of creativity isn't quite true.

The myth started when Kerouac answered talk show host Steve Allen's query of how long it took to write with a simple, "Three weeks." Over the years, Kerouac did little to dispel the idea of his spontaneously creative prowess.

"Well, the myth is half true," Robert "Larry" Inchausti, a Cal Poly professor emeritus of English, told New Times. "He did compose it in three weeks on that scroll and was writing in spurts fueled by stimulants."

However, Kerouac drew much of the novel from his journals.

"He had little brakeman notebooks in which he would experiment with what he called sketches in words," Inchausti explained.

To earn money, Kerouac worked as a brakeman for the railroad, which is what he had been doing when he lived in SLO, renting a $6-a-week room at The Colonial, a hotel that's now an 18-room communal living rental known as The Establishment.

In truth, he worked and reworked On the Road in his head, culled from his 1947-49 journals. Between 1951-57, he worked on as many as six drafts as he struggled to find a publisher. 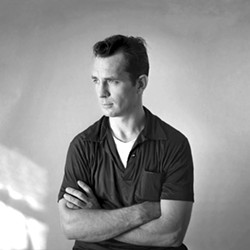 It wasn't until enthusiastically received excerpts of the manuscript were published in The Paris Review that Viking Press, who had once denied it, agreed to publish it. They offered a $900 advance. Kerouac's agent countered with $1,000, and the publisher agreed but insisted the payment would be in $100 installments out of fear that Kerouac would squander the money. Viking says the novel has sold more than 3 million copies and continues to sell about 60,000 copies a year.

was a poet, a philosopher, and a sociopolitical commentator all rolled into one. On the Road is important because it's an early example of his bop spontaneous writing style, which Inchausti chronicles in his insightful and carefully curated 2017 book, Hard to Be a Saint in the City: The Spiritual Vision of the Beats, which paints a picture of the Beat writers through their own words.

"This 'sketching,'" Kerouac wrote in his 1951 journal, "is the actual writing I will have to do from now on because I don't believe in the rest anymore—so-called 'objectivity,' so-called 'story,' the pretense of it, the smirk."

Bop spontaneous was a new kind of writing, Inchausti explained, "sketching random observations with words, and as it was revealed on the page the writer would arrive at what he called 'the jewel center of interest.' When Kerouac lived here, some of the word sketches he made became poems collected in Book of Sketches. There's a funny one about Avila Beach and another about being in downtown SLO and looking up at the mountains."

According to Inchausti, there's now an edition of On the Road unedited and verbatim from the scroll, or what Kerouac referred to as a "roll," since he felt "scroll" sounded pretentious. The publisher removed passages about Catholicism and changed the names of those included in the original manuscript, such as fellow Beat writers Allen Ginsberg, Neal Cassady, and William Burroughs.

But what about the ending? The scroll is famously missing the conclusion, which is chewed off. Kerouac wrote directly on the end of the scroll, "Ate by , a dog," and with the original ending was gone.

"Yes," Inchausti laughed, "the dog ate his homework. I haven't looked at the printed edition of the scroll version. The actual scroll is taped up, coffee stained, and tattered. I'm really looking forward to being there and seeing the artifact itself. I bet there's a bit of magical experience."

The caretaker of the scroll, Jim Canary, an Indiana University conservator and expert in Tibetan manuscripts, will come to the SLO Library to install the exhibition. Cal Poly Writing and Rhetoric Center Director Dawn Janke has known Canary for years and was instrumental in arranging the loan.

"I've known Jim ever since we attended a conference on the Beats in 2003," Janke explained. "I'd done my thesis on the Beats for my master's degree, and when I first moved to SLO in 2009, I saw Jack Kerouac on the cover of New Times in a story about when he lived in SLO. I told Jim, 'We've got to get the manuscript here. It's like Kerouac coming home! We've got to do this!'"

It finally happened now many years later thanks to local philanthropist Bob Shanbrom, who with Inchausti, Janke, and others, developed The Coastal Awakening, " and cultural movement centered within and around SLO County, where the physical landscape reflects a union of heart and mind," according to their website.

"From Krishnamurti's disciples in Ojai Valley and the Dunites in Oceano; to the healers and writers at Esalen and Big Sur; and the surfers, hippies, and progressive in Santa Cruz—ours is a legacy of liberation and diversity of expression," the website says.

The group has lots of other upcoming events to celebrate the Central Coast arts connection, but for it's Kerouac's scroll, which SLO County has enthusiastically pursued. It hasn't been easy or cheap. The scroll is owned by Indianapolis Colts owner Jim Irsay, who bought it at a 2001 Christie's auction for $2.43 million. It's obviously not priceless, but it is irreplaceable. Δ