On food, wine, and love

The way to these couples' hearts is through your stomach

Who needs Valentine's Day to inspire romance when you've found your soul mate? Still, on the day devoted to love, I have to confess: I love a good love story. That's why I always look forward to telling the romantic stories of local artisans in the food and wine industry. This year, I found three couples willing to reminiscence about how they came to fall in love. 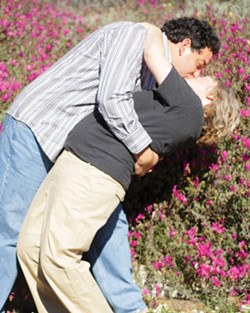 # Not surprisingly, these partners met through their work and share a passion for great wine and food--like me and my husband, Dan. We recently celebrated our 16th anniversary, and our love for each other grows greater each year. For couples, these stories are a reminder to keep the passion alive, whether it's a romantic holiday or a regular Tuesday. For those of you who haven't found that special someone you want to share your life with yet, these passionate couples just might inspire you.

I realize that most wine columnists in national magazines offer wine shopping lists for holidays. They recommend pricey Champagnes to pair with equally expensive caviars or rare vintage ports to sip with Godiva dark chocolates. And good luck finding their suggested combinations in small-town specialty food and wine shops. But I offer a much more grounded idea: Buy your soul mate a Pinot Noir from one of these experts and share it over a romantic, candlelit dinner at home or in a restaurant where you can linger. I can't think of a better way of creating a romantic evening.

When Pinot Noir specialists Lane Tanner and Ariki "Rick" Hill met, she was producing her eponymous brand at Central Coast Wine Services (CCWS) in Santa Maria, while he was working for the owners of the custom crush facility. Rick, a New Zealander, landed an internship at CCWS through an Australian-based educational program. It provides winemakers from New Zealand and Australia with jobs in American wineries. Rick hadn't yet created his brand of exclusive Pinots grown in Santa Barbara County and in Australia, named Labyrinth Wines.

She was living with her boyfriend, and Rick's wife was an Australian--but this isn't going where it seems their relationship didn't begin illicitly. Lane needed help to punch down her fermenting Pinot Noir during the harvest season in 1999 after undergoing surgery on both knees. But she's particular about her winemaking techniques and wanted someone who understood the temperamental varietal.

"Many winemakers offered Ricky money to work for them, but I knew he wanted to make Pinot Noir," Lane explained. "I called (he was back in Australia) and offered him two tons of my Bien Nacido Vineyard Pinot if he would work full time for me during harvest."

In addition she would provide him a place to live while he was here.

"Having a woman micro-manage is hard for most men," she recalled, "but Rick didn't mind, so we made up a five-year contract."

Coincidentally, both of them broke off their previous relationships around the same time.

During harvest 2001, Lane hired my husband, Dan, for a photo shoot of her bathing in a vat of crushed grapes. Rick was in charge of pouring warm water over her to remove the grape must (unfermented juice and skins) between poses.

"It was my fantasy shoot for when I'm an old lady and want to look back on younger days," Lane said with a laugh. "It was so intimate that Rick and I became quite attracted to each other."

Besides working together, they began traveling together. She also followed him to Australia in spring for grape harvest there.

"I wanted to elope to New Orleans on my 50th birthday in November, but [Hurricane] Katrina wiped the town out," Lane recalled. "By the end of harvest, we decided it would be simpler to have the wedding in our home garden among friends."

Dan, who has a minister's license, married them on Lane's birthday in 2004. Lane and Rick proved that a long-distance relationship can work out.

Pam Treadwell, director of food and beverage at the Cliff's Resort, candidly admitted that when she first met chef Evan Treadwell at Lido Restaurant, it was lust at first sight. Originally from the Bay Area, Pam was district manager of a food service company that catered to high tech corporations, including Apple.

"I'll never forget the night I walked into the Buffalo Grill (in San Mateo) where I hung out with friends and I saw Evan behind the bar making drinks," she said.

"There was just this instant physical attraction," Pam remembered, giggling over the memory. "We were both foodies, and on our first date, we went out for Thai."

At the time, Evan was cooking for renowned chef Nancy Oakes, but he moonlighted as a bartender "to make some extra cash," Pam said.

"We got married at the Buffalo Grill, and Nancy made our wedding cake," Pam said.

In 1999, the couple left their jobs to run the Benbow Inn in Garberville together.

"All of our dates were about food and wine. We ate all over the place," Pam said. "We still do that."

Vintners Rick and Diana Longoria celebrated their 30th anniversary last summer. Diana, hired as the first tour guide at Firestone Vineyard in 1976, met Rick there when he was cellar master.

"We began working together and became friends as we saw we really liked each other as people," Diana reminisced.

Six months later, after the breakup of previous relationships for both of them, Rick and Diana started dating. They were engaged in spring and decided to get married in August before harvest began.

"It happened really fast," Rick admitted. "When we started dating, it became something bigger. We were really comfortable with one another. It was the combination of many things--we were both quite similar in our philosophies."

In 1978, they moved to Napa where Rick became cellar master for Chappellet Vineyard, and their first child, James, was born.

"Rick didn't like Napa as much as Santa Ynez Valley where all the winemakers are friends," Diana said. "Besides, our family was here."

"I really felt we could make better wines here," Rick said. "Napa was known for Cabernet Sauvignon, but we had this whole breadth of wines in Santa Ynez Valley."

In 2002, Rick had several barrels of Chardonnay he considered so special that he bottled them as a reserve and named it Cuve e Diana. She admitted that she was taken by surprise.

"A lot of people said, 'Well it's about time, Rick!' We've made it this far, and there's a sense of accomplishment," Rick concluded. "We've both made it work and I just want to tell her: 'Thank you for having to put up with me all these years.'"

You can reach New Time's' Cuisine columnist at khardesty@newtimesslo.com.