On the axis of the arts

The Clark Center's got big plans and a bright future in the meantime, you're invited to a party

The Clark Center for the Performing Arts located across from generations of old farmland in front of Arroyo Grande High School is turning five. Despite its relative youth, the state-of-the-art theater's history can be traced as far back as three decades, when Mary Lee and Clifford Clark identified a need in their community. The rest, as they say, is history, but what also remains is the present and future, and all three are reasons for revelry.

"It's important to celebrate the [past] five years and look back on all of the accomplishments," said Connie O'Henley, the center's new executive director.

Stage right
With 180 successful shows in 2006, O'Henley asks the pertinent question, "What does the community want to see?" She 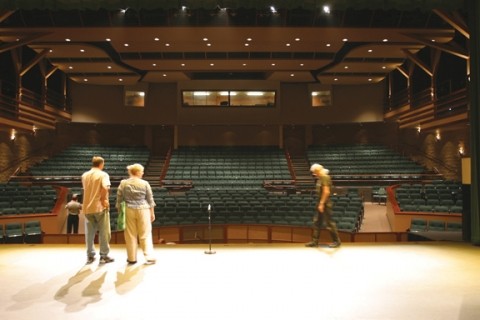 # understands the importance of knowing the demands of a county full of entertainment-hungry dilettantes. This season will be no different. Big-name acts and audience magnets like the Peking Acrobats will be part of the line-up.

A new season will kick off in September and run through May, and O'Henley is keenly aware of the center's dual purposes in the community.

"Schools and community can perform, it's a comfortable space, it's beautiful," she said. "The other purpose is we are bringing in quality, professional entertainment to this area that wouldn't otherwise have a venue."

O'Henley views the center as a performing space for everyone: "It doesn't have to be all about professional artists the magnitude of local talent in this area is impressive."

Hence the Clark Center's efforts to provide marquee acts such as the hit musical Forever Plaid, along with local productions, like SLO Little Theatre's Only The Lonely, A Musical Tribute to Roy Orbison.

Not-so-well-known
For the past five years, the Clark Center has been sitting pretty, but the venue isn't perfect, even amid the marble-countered box office, the 19th century Italian palace mirror in the grand lobby, the explosive watercolors of Judy Chapel (the lobby art exhibits change every two months), and the electronic marquee beckoning to passersby. According to Barry Hamlin, theater manager, "It is like being a homeowner you find things that need work along the way."

# O'Henley, who assumed her post in February, came from Central Coast Salmon Enhancement and, before that, spent 10 years at the SLO YMCA. She has experience in nonprofit management and was exactly what the Clark Center was looking for: someone with an extensive background in marketing.

Most of the long-term board members and employees skirted the issue of why the center hadn't solidified the executive director position until now. Yet O'Henley had the most candid and probably the most accurate response: "The woman before me came from another area [not in California], and this area is unique."

O'Henley is a local, knows this community well, and believes that makes a difference.

"One of the elements of the position is the business side, and that is difficult to fill because the executive director needs to have knowledge of the theater world and of the business world," she said. "And in the past, they have hired more for the theater skills and the business end has suffered."

Dirt turns
Beyond the dusty bulldozers and behind the temporary chain fencing currently enveloping the high school, the Clark Center is peeking through the links, wanting in on the action. There's solid hope for a groundbreaking this summer on an annex that will expand the center, which would allow for much-needed (and proper) office space.

A smaller Studio Theatre is the gem within the larger gem, used for petite productions. As of now, the 250-seat venue has carry-over sound from the larger auditorium, so knocking down walls and building new ones to isolate the sounds between the two is in the plan.

"We want to give [the Studio Theatre] its own identity," Hamlin said.

A new scene shop, a $2 million renovation for dressing rooms, and a proper green room for the performers are also in the blueprints. There are also whispers from Hamlin and O'Henley about an outdoor amphitheatre.

"Potentially, there will be a raised platform, which would provide an area where we can do things outside and will tie the facility together," O'Henley said.

She wants to expand the entertainment committee she works with to select the center's line-up to "include not only Clark Center Association board members, but several folks from the community."

The crystal ball is clear
Curtis Reinhardt, a past executive director at the Clark Center and current volunteer, sees a bright future: "The nonprofit Clark Center Association has had four executive directors over the past six years. There have also been a couple interim periods where a board member or paid consultant stepped in smooth sailing is ahead for the center and its management. All the responsible organizations are now focused on operating as a cohesive unit."

O'Henley agrees: "I'm so excited to be here and am truly enjoying all of the wonderful people that make it what it is. We have 150 volunteers who worked 11,000 hours last year. It says a lot about the Clark Center, and the three organizations that are making it happen, [Lucia Mar U.S.D., The Foundation, and The Association]."

For more information on the anniversary celebration and all events, call 489-9444 or visit www.clarkcenter.org.

Christy Heron's AGHS days were some of the best times of her life. Reunite at cheron@newtimesslo.com.