ON THE BASIS OF SEX

Mimi Leder (Pay It Forward) directs this biopic about a young Ruth Bader Ginsburg (Felicity Jones) and her fight for equality, which eventually helps propel her onto the Supreme Court of the United States. (120 min.)

Glen Just when I thought I couldn't respect Ruth Bader Ginsburg more, along comes this film to show me I can. Ginsburg was one of nine women among 500 men admitted into the 1956 class of Harvard Law School, and Sam Waterson as Dean Erwin Griswold is the constant reminder to her and the other women that he's not convinced they're worthy. Director Mimi Leder reminds us again and again that Ginsburg is in a man's world. The opening scene shows a herd of young bespoke suit-clad men in wingtip shoes striding toward Griswold's law school orientation, where he describes what it means to be a "Harvard man." Ginsburg looks around the audience, seeing man after man. What it took to continue on in the face of such dismissiveness and discrimination is nothing short of amazing. This is also the story of Martin Ginsburg (Armie Hammer), Ruth's forward-thinking husband and the herculean effort it took them both to attend law school and raise a family. We learn about Martin's health scare and how Ruth attended both his and her law school classes so she could take notes as he recovered. It's a harrowing story of perseverance and a tribute to the couple's commitment to each other. Also essential to the story is the relationship between Ruth and her firstborn, Jane (Cailee Spaeny), who inspires her already driven mother to work even harder for equality so her daughter has the opportunities her male counterparts enjoy. Ruth and Martin eventually enlist the help of pioneering equal rights lawyer Dorothy Kenyon (Kathy Bates at her most acerbic) and ACLU attorney Mel Wulf (Justin Theroux) to take on the discrimination case brought by Charles Moritz (Chris Mulkey), who ran afoul of a gender-specific law. The courtroom drama that follows is inspiring and restored my faith in our justice system. 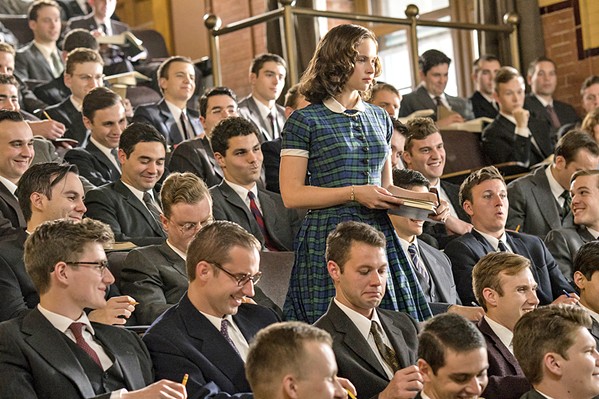 Anna Ginsburg is a small but mighty force to be reckoned with, and while most are more familiar with her work on the Supreme Court, this film highlights the massive amount of work, passion, and dedication it took for her not only to rise up in her field, but to be recognized at all in the sea of men surrounding her. Right away it's evident she has an uphill battle ahead. When the small group of women at Harvard Law School are invited to dinner at Dean Griswold's home, it's abundantly clear that he is unimpressed with their place in his world and quickly dismisses their reasons for attending. Once graduated, Ruth's dream of practicing law is shot down at firm after firm, either because they simply don't have "a place for a woman" or because "the partners' wives will be jealous." She is, however, offered a job teaching at Rutgers, and while it isn't her dream, it's a paycheck and soon the world of academia is her focus. Martin is a brilliant tax attorney and a charming individual whose total faith in his wife's abilities is endearing and seemingly unusual for the time. The case that sparks the beginning of change in gender equality in law is the perfect opportunity for the two to fight the good fight together. Moritz is an unwed caregiver to his aging mother, but because of his gender, he's excluded from tax exemptions for caregivers, which were assumed to be women. Despite being told there was no way, no how to win this, the Ginsburgs carried on and won a case that's still changing the course of history today. This is an uplifting piece of cinema, and a love poem to Justice Ginsburg and her continued fight for good.

Glen On the Basis of Sex is both an important history lesson and an inspirational film for girls and young women still struggling for full equality, access, and representation. I hope parents will bring their tweens and teens to the theater as a reminder that despite staggering odds, justice can overcome tradition and the status quo. The film also works as entertainment—tax law has never seemed so exciting! The acting and direction is roundly excellent as well. Jones is wonderful as the diminutive Ruth—she plays her moments of despondency and weakness effectively, reminding viewers that even the Notorious R.B.G. is fallible. Hammer is terrific as her dashing husband, who also acts as the bridge between Ruth and her teenage daughter, Jane, who at first finds her mother overbearing but soon discovers she's an inspirational hero whose strength and tenacity are needed for the fight of their lives. I was so inspired by this story. I think being raised in a home with a lot of strong women made it resonate. The film's a tribute to smart and proud women everywhere. I loved it! 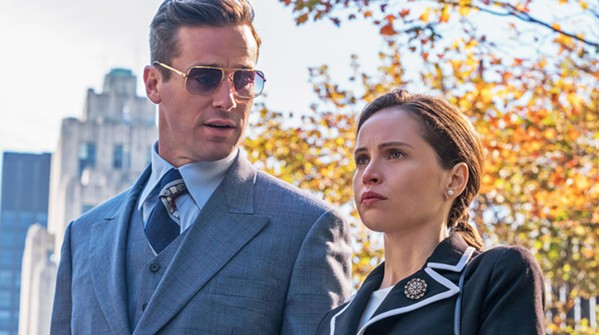 Anna The struggle between Jane and Ruth is so relatable, and while there is no denying her mother's feminist streak, Jane is of the younger generation that wants protest and radical change, not just slow-to-come legislative wins. The family is a close-knit one though, and Jane's ability to participate in the preparation for the upcoming hearing is crucial to cementing her mother's hero status in her eyes. It's a very sweet, relatable, and wonderfully American household that has a powerhouse of feminism behind it. When told things like "smile more," Ginsburg struggles with being the driven, strong woman she is instead of the soft, pliable creature that men expected a woman to be back then—and, frankly, still sometimes today. The Notorious R.B.G. has been a big source of inspiration for civil rights advocates, especially in the hurricane-like political climate of late. But this woman has been kicking ass for years upon years, and this glimpse into her early work and family life is uplifting and empowering. Like Glen said, take your daughters, nieces, and any young women in your life to see this one. It's powerful. Δ