On the front lines: A new, multi-media performance piece about the experience of war, 'BASETRACK Live,' comes to Cal Poly's Spanos Theatre

For San Luis Obispo High School graduate Blake Turner, war wasn’t what he expected. After struggling through school and feeling the pressures of college, he found himself aimless and out of options. So he signed up for the military—as did thousands of other young men and women in the United States—unaware of the pain, anxiety, depression, and endless difficulties that lay ahead. In 2010, he was deployed to Iraq, where he was stationed as a radar operator in Taji, sitting about 20 miles north of Baghdad. He returned a little more than a year later, irrevocably altered by what he had seen, felt, and heard.

“You grow up thinking it’s one way and find out it’s hell,” he said over the phone. 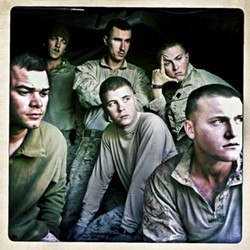 Turner’s experience is far from unique. In January, the Department of Veterans Affairs released new data that showcases how bleak and dire the situation is for young veterans of Afghanistan and Iraq. According to the report, the suicide rate for male veterans younger than 30 rose by 44 percent between 2009 and 2011. For women, the rate rose by 11 percent.

For the general veteran population, the numbers grow even grimmer. It’s estimated that every day, approximately 22 former servicemen and women take their own lives. These are staggering statistics that reveal the enormous emotional and physical challenges armed servicemen and women must accept, endure, and overcome on a daily basis—challenges that form the core of a new, multi-media performance piece titled BASETRACK Live.

In 2010, the same year Turner left for Iraq, photographer and freelance journalist Teru Kuwayama accompanied the 1st Battalion of the 8th Marine Regiment in the Helmand Province of Afghanistan. Along with a small team of photojournalists, he embedded himself in the day-to-day grind of these troops, documenting a counterinsurgency campaign in a war that, at that point, had been dragging on for nearly 10 years. Their mission? To bridge the disconnect between troops abroad, their families at home, and an American public awash in the abstract snippets of war news that filter through the mass media.

Funded by the Knight Foundation, Kuwayama and his team launched a new type of network. Using mobile devices and social media, this network offered soldiers and their families a chance to interact with each other by sharing photos, stories, and updates of their ongoing experiences. What began as a simple, open-source site intended to last the seven months of the First Battalion’s deployment evolved into a sprawling, multi-platform project that integrated Facebook, Flickr, and Google Maps in an effort to inform and educate. Eventually, it garnered more than 5 million hits and became the primary lines of communication between these marines and their families. The result was the first of its kind—an intimate glimpse into the lives and conversations of soldiers and their loved ones. It was called Basetrack.

Three years ago, Edward Bilous, director of the Center for Innovation in the Arts at Juilliard, was visiting an exhibition at Google’s NYC office in Chelsea. On the walls hung photographs of these Marines, in repose and in action, that were featured on the Basetrack site. They immediately seized Bilous’ attention.

“I saw these photos and was so inspired by them,” he shared over the phone. “They captured the emotion and expression of these armed service personnel in a really haunting and moving way. When I saw the photos, I was so impressed by the power, but I also knew there was more that could be done with the material beyond framing it as a journalistic experience.”

Bilous set to work, and, in collaboration with some Juilliard alumni, conceived a stage show that could highlight the elements that made Basetrack so impactful: the personal story of soldiers from their deployment to their bittersweet return home. The piece, which premiered in 2012, was only 30 minutes long, but its innovative blend of music, stagecraft, and technology became the framework for a feature-length adaptation, produced by En Garde Arts, the acclaimed theatrical company headed by former Disney executive Anne Hamburger.

“Something about the Basetrack story felt so compelling as an artist,” Bilous said. “I’m a firm believer that we learn and communicate and share in lots of different ways beyond the use of words. All too often, history is written just with texts, and that learning is strictly reliant on words. I love this project because it was, from the beginning, a multimedia project.”

Like the original material that inspired it, BASETRACK Live is a collaborative effort, with a complex and dynamic structure. The story follows the experience of three, real-life Marines and their loved ones, through the challenges of deployment, active duty, and the eventual homecoming. Adapted by Jason Grote, the dialogue is taken from text that appeared on the Basetrack site, and it’s backed by an intricate musical score that blends the classical stylings of the cello and violin, with the more contemporary sounds of a DJ and electronic drum. As these Marines, their friends, and their families go through the turbulent emotions that accompany military life, projections of photographs and videos from armed servicemen and women act as a chorus, interspersing the main narrative on screens behind the stage. It’s a deeply immersive encounter, and one intended to mirror the fractured lives of those engaged in modern warfare.

“It’s refreshing,” Seth Bockley, director of BASETRACK Live, commented over the phone. “I do think it’s refreshing anytime you have a play where the audience is liberated from the purely narrative and literary tradition. Sometimes, in visual theater, audiences today, they are very used to intaking an enormous amount of visual information, and digital media in general, with fast attention spans that act very nimbly.”

When Bockley speaks of the show’s fragmentary nature, he’s not just talking about its technical aspects. In presenting this piece as a non-linear blend of video, dialogue, music, and photography, BASETRACK Live becomes an animated and potent representation of how soldiers today live their lives: in bits and pieces, blurred and tangled within an entirely new military complex that now thrives more off of the remote technology of a drone program than off of personal, hand-to-hand combat. It’s a new kind of theater for a new kind of war.

“Linear narrative is not how nature works,” Bilous explained. “I think that what’s happened as a result of the Internet, is rediscovering that nature doesn’t work in any sort of step-by-step linear process. It’s more a chaotic web where everything is interconnected. That’s true in the way we experience our lives and reality, and now I think it’s affecting how we communicate and live online.”

When SLO native Turner settled in Iraq, this was his surrounding atmosphere—one of chaos and destruction, but also one that bore disquieting similarities to the life he left behind. Amid the tumult of endless enemy mortar fire, Turner continued the 12-hour routine of his daily job. In between, he and his NCO would check updates for World of Warcraft. He and his fellow troops still had to pay too much for too little and too spotty an Internet connection. In a way, the whole thing became normal. 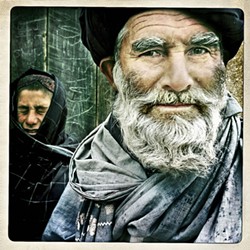 As Turner described, “There are stages you go through before you deploy. First, I was really scared, and I came to accept it. You get off the plane, and it’s like flipping a switch. You turn off your fear, turn off your emotions, and you’re just doing your job … . You don’t think about it. Thing is, your mind and body get used to it, the grind of 12 on and 12 off. You go through some things. If you’re a little bit inexperienced, there are emotional phases: anger, depression. But I came to complacence. At the end, I was kind of happy.”

As with most soldiers, this complacency ended the minute Turner returned home. Suddenly, there were no more 12-hour shifts, no more backbreaking labor—hauling 70 to 100 pounds of arms, ammo, survival supplies, and tech gear around a hotter-than-hell desert. Suddenly, the sounds of enemy fire were gone, as were the harrowing sights of the explosions, death, and destruction they generated. Suddenly, Turner was left in the distressing position that so many recently returned troops find themselves in: He was alone, disconnected, and forced to live with the troubling physical and emotional remainders of an experience only 1 percent of the public can relate to.

“When you come back, you have to adapt,” Turner explained. “You’ve been away for a year, your mind is set that way. It’s difficult, and when I got out, I didn’t realize it. You’re used to something. It sounds normal. It’s like when you get kidnapped and grow up with this person, everything seems perfectly normal. We come back, and it’s really hard for us to adjust.”

Stories like Turner’s are the kind that BASETRACK Live embodies. They are the stories of crippling PTSD, depression, isolation, hope, and the need for understanding that every armed serviceman and woman bears—but they are also the stories that continually evade popular discussion within the media and the public at large. Bilous, Bockley, and the entire creative team intend for their show to fill this gap, by presenting the very real and raw effects of war on soldiers and their families in an entirely accessible manner. It aims to achieve what the original network did for soldiers and their families, but on a broader scale. At its core, it aims to connect—connect veterans, loved ones, friends, and the community as a whole with the humanity of a war that can seem so distant and unreal.

“It’s to bring military and non-military audiences into conversation,” Bockley commented. “We don’t necessarily tell these stories in American theater, and in the arts. There’s something radical about encouraging audiences to think of themselves as, ‘This could be me, this G.I. person far away could be me, or my child.’ We are all in the same society, and we do share so much with these people. … The damage that war causes, we are communicating that, unflinchingly and unsparingly, but also offering a message of hope and possibility, of hope and reconciliation for those who have undergone trauma.”