On the future of the organ

Pipe organist Cameron Carpenter has long lamented his instrument’s incredible immobility. And while it would be highly unusual for most musicians of Carpenter’s stature to advocate for the digitization of one’s instrument, in his case it only makes sense: a touring performer, Carpenter has long been required to play a different instrument every night. When we last spoke—for a piece coinciding with his 2011 performance at the PAC— the organist was dryly witty about these musical one-night stands, as he called them. 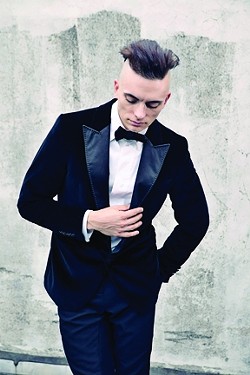 “All of the instantly relatable anecdotes, of course, apply,” he said then. “We, of course, experience a certain mad rush of unprepared coitus, a pleasurable chafing of some kind, followed by a kind of wrestling to the ground of the difficulties, followed, of course, by a kind of embarrassment and shame, and a wish to get the hell away from each other.”

That’s just how he talks.

Perhaps the most visible organist out there, and certainly the sparkliest, Carpenter gives solo recitals that regularly fill concert halls all over the world. His impressive bio has been repeated so often I don’t know if it’s possible to phrase it in a new way, but it usually starts off with Carpenter’s performance of Bach’s Well-Tempered Klavier at the age of 11, and goes on to highlight his teenage years at North Carolina School of the Arts, which he spent transcribing the works of Mahler for the organ and learning the complete works of Bach and Schumann. (He’s now transcribed more than 250 works for the organ, among them 100 major symphonic works, including those of Wagner and Debussy.) His studies at Julliard are mentioned, of course, as is his Grammy-nominated solo album Revolutionary, followed by his first major composition for organ and orchestra, Der Skandal, commissioned by the Cologne Philharmonie. The esteemed concert halls at which he’s played are then listed. It’s a very impressive set.

But the nature of the organ as we know it, Carpenter said when we last spoke, is limiting to the traveling performer, for whom each new venue requires the tackling of a temperamental behemoth whose individual idiosyncrasies largely remain a mystery. Even then, Carpenter seemed to speak of the instrument’s current state—with its hulking physical presence and churchy undertones—with a kind of nostalgic air, as if those days were already in the past. Even then, he was predicting a radical shift in the way the pipe organ is built, played, and experienced.

The organist returns to the PAC with a Friday, April 26, appearance, and when I spoke with him again recently, he had made significant strides in that regard. The biggest of all was this: Carpenter’s somewhat controversial plans to digitize the pipe organ, what he called his “dream project,” are now underway. The touring organ Carpenter has designed is set to be unveiled in March of 2014.

Carpenter’s upcoming performance on the Forbes Pipe Organ, then, may well be part of the end of an era. A year from now, perhaps, a Cameron Carpenter concert might be a much different experience.

Not that his performances have ever been predictable. From Carpenter, one can expect a high degree of virtuosity and showmanship, but the music to be played is rarely, if ever, announced in advance, and can range from classical to pop to original compositions that fall anywhere in between. Carpenter’s most recent compositional project is an “opera” for the organ titled “Science Fiction Scenes (Visions of the Organ from Space).”

The piece, which was partly inspired by the graphic novelist Chris Ware, is still in progress, though the first of its 10 movements premiered at the Berlin Philharmonie in September of 2012.

“He’s explored science fiction in ways other than the usual routes,” Carpenter said of Ware, “and I’ve actually never been a huge science fiction fan, but something about the idea of possibility and using the organ as a vehicle, a bit like a spaceship, to be really simplistic about it, and the idea of worlds that are undiscovered and un-dreamt of ... there is something in that that, for me, is evocative of my own relationship to the organ.”

Carpenter’s work does, upon reflection, seem at home in the context of science fiction. Perhaps it’s the genre’s wild and wonderful visions of the future, or its ability to address controversial ideas by transplanting them to distant galaxies, or, in Carpenter’s case, by translating them into music.

Then there’s his reference to the work as an “opera” for the organ. While not an entirely new conceit—he points to French composer Charles-Valentin Alkan’s Concerto for Solo Piano—he explains it as “a statement about the scale of a solo work, which in some ways strives to exceed the usual scope of how the instrument is thought of ... So what I’m sort of saying is this is something that is meant to be at least evocative of a vision that’s much bigger than itself.”

Arts Editor Anna Weltner wants to be an organ donor. Contact her at aweltner@newtimesslo.com.