On the record: Get to know John Peschong, the new SLO County Supervisor

John Peschong’s office, tucked away on the second floor of a quaint commercial complex in Templeton, is an unsuspecting workplace for a formidable political strategist.

Within Templeton’s sleepy Main Street is a man who worked for Ronald Reagan in the White House, helped get George W. Bush elected president twice, and directed the Republican Party of California. Today, Peschong runs his business, Meridian Pacific, which provides political consulting for corporate clients like Phillips 66 and for local politicians like SLO County Supervisors Debbie Arnold and Lynn Compton.

In person, Peschong is affable, quick to ask you about yourself, where you went to school, and your favorite football team. But when it came to the issues he’ll tackle as the newly elected SLO County 1st District Supervisor, he was more reserved.

New Times spent an hour with Peschong in the wake of his election win. Below are a few of the highlights. 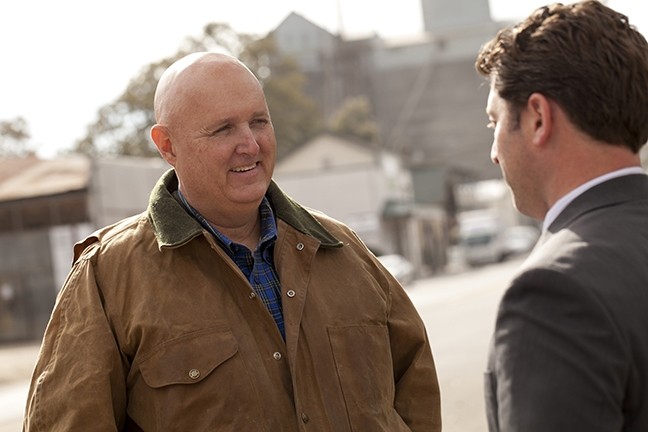 “I went up to the Heatons’, who live next door to Justin Vineyards. I saw what had gone on across from their land. It is devastating to view that. It was terrible and it shouldn’t have happened. I was not supportive of the oak tree protection urgency ordinance because it went a little too far. It wasn’t just oak trees and oak tree woodlands. It was also sycamores and gray pines. They added all kinds of stuff in there.”

“There’s two programs I’m interested in looking at. The SLO County Farm Bureau is working on an oak woodlands management certificate program. You train people so they get a certificate on how to manage oak woodlands. You as the farmer are certified to be able to make those decisions knowing they’re using best practices when it comes to oak woodland management. There’s also what the county’s been doing, adding different things for their permanent ordinance. I’m looking forward to figuring out how we find a balance between the agriculturists and the environmental side … something in the middle that manages to reinforce property rights.”

“I’ve always supported the medical. I’ve met a number of people who have illnesses where it helps them. Who am I to get in the way of someone’s well-being, pain, and suffering? They should be able to have access to it. I did not support the brick-and-mortar dispensary that [Ethnobotanica] tried to put into Nipomo. With so many delivery services in the community, people have access to it, and people can grow it for their own use.”

“I did not support Proposition 64, but it is now the law. That means it needs to be treated like an agricultural crop. There are locations in the county where marijuana is being cultivated. I would support where they’re going to be. The state of California has spoken, and not just the state, but SLO County. I worry more about the social ramifications of it. Everything from using it and driving, to the edibles and the edible community—the gummy bears. If you can’t advertise an animated camel smoking a cigarette to sell cigarettes, why are they marketing edibles in the shape of candy for kids?”

“I’ve been in towns and cities that have 40 dispensaries in a two-block space. There has to be some sort of regulation on the growth of this. You’re still dealing with a cash operation. Unless the feds change their opinion, what do you do with the cash? We have to think about that, the location of it, for the safety of our communities.”

“We have until June 30, 2017, to put together the makeup of who’s going to manage the basins. My belief is the county acting as Flood Control District can do that and put that together. We got sidetracked with the ballot initiative [to form a water district over the Paso Robles Groundwater Basin]. That sent a very clear message from people: ‘Don’t mess with us.’ We have to be able to figure out how to get this managed using the Flood Control District, and I think we can do it. There’s no way this should go to Sacramento. If it goes to Sacramento and they start running it, we’re in trouble.”

“The realistic solution is to send [State Assemblyman] Jordan Cunningham up to Sacramento to just raise hell and try to get some additional money for our roads. All of the [money] that is supposed to go to roads isn’t going to roads anymore, and our roads are deteriorating. We have to fight for those resources. I attended a California State Association of Counties (CSAC) meeting and we had multiple discussions with other counties about road infrastructure. We’re not the only county in the state [with road problems]. CSAC is going to go lobby for that. I do hope we can put enough pressure on them. I’m still going to attempt to move roads up on the county’s budget priority list.”

“I believe there’s a will in the community to try to drive not just workforce housing, but affordable housing. We might all have different ideas on how to do this. The Board of Supervisors [adopted] a pilot project to incentivize people to build that type of housing. I like that idea of incentives.”

“If you look at surveys from people who build houses it’s not just the cost of the permits, but also the wait for the permits. They could get a permit 19 months after they submit an application. Most people can’t wait that long. In Phoenix, what they did is they went out and certified architects and engineers in the community. So when your [housing] plans are done by them, they’re pre-approved and your plans can turn around in 24 hours. Those are the types of ideas that I’m interested in. We need to try things. It’s not going to be one silver bullet.”

On expanding the Sheriff’s Department …

“My whole purpose in making [gangs] a campaign issue is because I talked to people who own small businesses, liquor stores, and gas stations. I brought it up in every debate, and everybody agreed: Yes we have a problem. And then there’s a report from Paso Robles City Council saying we don’t have a problem. But the two robbery suspects who were recently arrested are Norteños. Have we answered the question?”

“The only way to fix this is if we get together, work with the Sheriff, the District Attorney, and get everyone focused on the problem. There are more than 800 known gang members in SLO County. We have to make sure law enforcement has the resources they need. The gang task force is working here in North County, and I need some more buy-in from the police department in Paso Robles to help fund some of that.”