Once Upon a Time ... in Hollywood is free-spirited romp through 1969 Hollywood

ONCE UPON A TIME ... IN HOLLYWOOD

Glen Tarantino takes us on an entertaining, albeit meandering, ride through 1969 Hollywood, where he's mixed real-life characters—like Charlie Manson (Damon Herriman) and his "family"; rising starlet Sharon Tate (Margot Robbie) and her director husband Roman Polanski (Rafal Zawierucher); martial arts star Bruce Lee (Mike Moh); and actor Steve McQueen (Damian Lewis)—with fictional ones like our protagonists Rick and Cliff. Some of the facts of the film are true—for instance that the Manson family lived on George Spahn's (Bruce Dern) Spahn Movie Ranch, but like Inglourious Basterds, Tarantino's got some historical revisions in mind. Knowing the real history behind the Manson murders sets up viewers for the twists and turns to come, and even at two hours and 41 minutes, the film doesn't feel slow; however, it also doesn't seem like it's in much of a rush to reach its conclusion. Instead, this is a film to be savored for its attention to detail and remarkable performances. The film's mise-en-scène is incredible. Tarantino had vintage Hollywood marquees and landmarks restored to their 1969 glory and made use of landmarks that have changed little, such as Musso & Frank Grill and the Playboy Mansion and its famed grotto. The costumes are also amazing—from the Manson family's hippy garb to Rick's swank mock turtlenecks to unctuous Hollywood mover and shaker Marvin Schwarzs' (Al Pacino) double-breasted power suit. Some enterprising entrepreneur should start silk screening Champion Spark Plug T-shirts like the one Cliff's wearing. They'll make a mint! And the cars! Holy moly! You'll feel transported to the era. As for the acting, Pitt's fantastic here, taking on a speech pattern that's as memorable as the one he used as Lt. Aldo Raine in Inglourious Basterds. Cliff is the character most comfortable in his own skin. The laconic stuntman is perfectly happy being Rick's gofer, and he's the biggest badass in Hollywood though he keeps it low key. DiCaprio has a more complex job to do playing an actor who we see acting. That's some meta-level work. Rick's confidence is waning, and his interactions with Schwarzs and a child actor (not "actress," which she finds demeaning) named Trudi (a truly remarkable Julia Butters) are highlights of a highlights-filled film. Trudi's character also offers Tarantino a chance to comment on method acting. She's so much more together and mature than Rick, and that's hilarious. Tarantino lets his actors shine bright.

Anna Rick always plays the "heavy" in cowboy flicks, but the real magic lies in Cliff's badass skills as his stunt double. The two have been partners for years—Cliff acting the part of assistant, buddy, gofer, and repairman for the self-centered but vastly insecure Rick. The scenery in this film is meant to be savored—Tarantino has got his finger on the pulse of old Hollywood; the look, the feel, everything is right here. Weaving separate storylines in and out is a wonderful way to soak up the beautiful world he's created, from Manson's weird hippy compound filled with stringy young fools to the decadence of Hollywood's elite to the movie theater where Tate goes to watch herself in The Wrecking Crew. It's an old story reimagined, twisted, bent, and repurposed with the sole intent of entertainment. Meandering? Maybe, but this is one film I wasn't looking forward to ending, even at more than two hours and 40 minutes. Cliff is certainly a favorite character, and Pitt pulls off the relaxed but ever-watchful bad boy with panache. He's inherently distrustful but self-assured and fully capable of kicking ass. When he drives hippy teen Pussycat (Margaret Qualley) out to Spahn's ranch, the whole setup seems off. There's a bunch of young, dirty kids holed up together on his old pal's land, and that just doesn't sit right with Cliff. He finally forces himself into George's old house where he finds the man alive, surprisingly. Unimpressed with their visitor's questions, the hippies stick a knife through the wall of Rick's tire. Seems like a weird way to get someone to leave, but his unwelcomeness is apparent nonetheless. Those kids messed with the wrong man—and the wrong man's boss' car. Cliff delivers a couple of pretty epic beat-downs in this film, including the licking of a shoeless string bean out at Spahn's ranch, which is one you won't soon forget. This is another film with Tarantino all over it, and it's a great addition to his body of work. 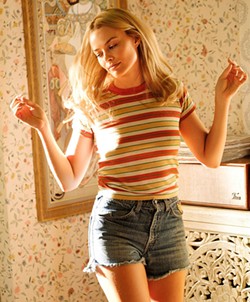 Glen There's so much more we could discuss here, like Tarantino's obvious foot fetish, how he characterizes Sharon Tate and whether he's guilty of using her as mere window dressing, and how he simultaneously romanticizes and tears down his heroes like Bruce Lee. Tarantino has repeatedly said he wants to make the kinds of films he wants to watch. Choosing to examine the societal disruption caused by the rise of the counterculture manifested in the extreme as Manson's family, using Spaghetti Westerns and B-movies as a backdrop, exploring masculinity and misogyny through Rick and Cliff's friendship—it's all very ambitious, and the film bears repeated viewings. It's classic excessive Tarantino, so if you like his filmmaking, you'll love this. I did.

Anna Same here. While I'm bound to hear some grumblings over "capitalizing" on the Manson murders, this reimagining is a fantastic "if only" version of the tale, where the bad guys get taken down as epically as only Tarantino can imagine and the world of these characters gets to keep spinning. It's definitely a film worthy of repeat viewings, and its almost rambling storyline pretty much demands it to catch every detail. Once Upon a Time ... in Hollywood is an achievement in storytelling, casting, and scenery. Get to the theater for this one simply for the visual richness Tarantino lays out—the rest is just cherries on top of the sundae. Δ