Synergy is one of those words that’s been so co-opted by self-help manuals and business seminars that it’s become annoying, and yet it’s the perfect word to describe the collaboration between visual artists Brian Christopher and Jimmy apRoberts, who created 20 paintings for “Breadcrumbs: A Collaborative Rediscovery of Fairy Tales.” Separately they’re both gifted graphic designers, but together they’ve created a whimsical new installation that transcends their individual abilities.

This is the fourth collaboration for the two San Luis Obispo artists, both who operate design firms, and this time around they’ve turned their attention to fairytales. The two met about five years ago, and both worked at AdMinds until it went out of business. 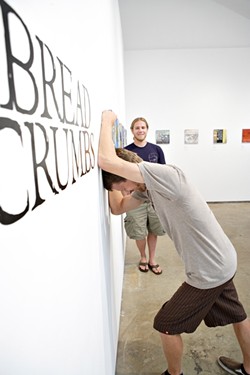 “We should be competitors,” admitted apRoberts, “but we’ve found ways to work together.”

For “Breadcrumbs,” the duo began by researching fairy tales online.

“We looked at the [Arts Space Obispo] space and figured we could fit 20 paintings, so we found a Web site and picked what we thought were 20 representative stories,” explained Christopher.

Then the two went through each story and picked lines of text upon which to base an illustration. The goal was to arrange the lines of text in an order that would create a whole new fairy tale. So their tale begins with “The Elves and the Shoemaker” with this line: “A shoemaker, by no fault of his own, had become so poor that at last he had nothing left,” followed by “And when he came to the sea, it was quite dark-grey, and the water heaved up from below, and it smelt putrid” from “The Fisherman and His Wife.” From there it adds lines from “Rumplestiltskin,” “The Ugly Duckling,” “The Golden Goose,” and so on, weaving a tale of a wolf and a bear and a queen.

As the two struggled to create a coherent story from the various lines, they “quickly realized we were not going to end up with a fairy tale that flowed perfectly, not even plot-wise but language-wise, too,” admitted Christopher.

They discovered that “lots of fairy tales have bears, wolves, and queens,” according to Christopher, so they found common characters to tie the disparate elements together. In the end, their new fairy tale manages to have the makings of what Peter De Vries†would consider a story: “a beginning, a muddle, and an end.” In this fairy tale, however, the wolf turns out to be the good guy, yet he meets an untimely end.

When it came time to begin the paintings, the two laid out all 20 canvases in a hallway in apRoberts’ home and began by laying down a base color and doing what Christopher called “Jackson Pollocking” them, splattering paint all over. They kept the paintings in the order they would be hung in an effort to “tell a story visually, as well as through the text,” explained apRoberts.

Then they started picking up a painting, working on it, and then setting it back down to let the other artist work on it. The difficulty was knowing that after they put one of the paintings down, thinking it was done, they knew that the other might pick it up and change it. They were forced to trust each other.

“The whole idea was to combine visual aspects with text, and I think if you look at the paintings in order and read the story as you go around the gallery, you’ll find lighter moments and darker moments in the story are matched by lighter-and darker-feeling paintings,” said apRoberts.

Both artists praised the collaborative process, noting that not only did they collaborate, but they also forced the various authors of the fairy tales to collaborate for the new combined fairy tale. They’re especially excited about the improvised storytelling that’s scheduled in the gallery for Friday, July 18, from 7:30 to 8:30 p.m., when Kirk Henning will lead a group of local storytellers in creating improvised interpretations of the paintings on display.

“They’re going to make a whole other story by looking over our work. It’s a complete bastardization,” laughed Christopher. “The improvised story will add another layer of meaning.” That’s synergy.

“Breadcrumbs: A Collaborative Rediscovery of Fairy Tales,” by Brian Christopher and Jimmy apRoberts, is currently on display through July 25 at ARTS Space Obispo, located in the Creamery, space #165, at 570 Higuera St., SLO. On Friday, July 18, Kirk Henning will lead a group of local storytellers in a “Storytelling Improv,” in which they will create improvised interpretations of the artwork on display; from 7:30 to 8:30 p.m.

Glen Starkey is a man of few layers. Contact this simple man at gstarkey@newtimesslo.com.