Nicole Strasburg’s paintings are on fire. That is, the Central Coast landscapes and long yellow grasses captured on her birch-wood canvases are consumed and concealed by flame. The impetus for the series was the trio of wildfires that raged between July 1, 2008 and May 20, 2009, threatening homes and filling blue Santa Barbara skies with noxious black smoke. Strasburg’s abstract renderings of the fires are on display at ARTS Space Obispo through Sept. 8.

The exhibit is the second curated by the Central California Museum of Art, an organization that spans 13 counties and presents “artists and exhibitions—both historical and contemporary—that speak to the varied experiences peculiar to the middle region of the Golden State,” according to the mission statement. The first was a show of Peter Zaleski’s mixed media paintings and prints at Cuesta College last March. The next scheduled exhibit features the work of photographer Sky Bergman, a Cal Poly Art and Design professor.

Strasburg’s work didn’t always depict fire. In fact, there was a time when landscapes were entirely absent, though anyone familiar with her work may find that difficult to believe. In high school, her obsession was realistic portraits, of herself and friends. This gave way to black-and-white charcoal drawings in college. She began to draw her figures into an interior space. Then the interior had a window looking out to a landscape. As she puts it, one day she opened the door and walked outside.

“At some point I just went outside and I never came back,” she explained. “For some reason, that big open space is what I want to live with. I’ve tried to go back to the figure but painting is such a solitary thing and by painting the figure you’ve got company.”

Appropriately enough, Strasburg’s landscape meditations are painted onto a birch panel, the remnant of a happy accident. After living in Paris for several months, Strasburg returned to the United States dirt poor. She couldn’t afford canvases so she salvaged birch scraps from a carpenter’s shop. When she ran out of wood scraps, Strasburg would sand down the paintings she didn’t like and paint over them. This is where she got into the habit of sanding her paintings between layers.

Fire entered the picture as a reaction to the brutal and traumatic Santa Barbara fire season. Strasburg calls the shift “a natural progression.” It started with the Gap fire that raged for nearly a month in the summer of 2008. Strasburg created a handful of small paintings of the fire, which were included in an exhibit at Santa Barbara City College. Two days before the show’s opening, the Tea fire began and the gallery was closed because of the smoke. Strasburg’s fire paintings—gushing black smoke and elegant plumes—mirrored what was happening outside.

So she continued, proving that plein air isn’t always pretty. Strasburg’s fiery landscapes are beautiful, and terrible. Gordon Fuglie, founder of the Central California Museum of Art, is proud of the statements these paintings make to the local art scene.

“”With all the predominance of plein air painting it’s what people think of all the time,” said Fuglie. “But this gets you to think differently about the region that you live in, and what is landscape painting? Does it have to be pretty?”

The painter collects her landscapes from trips she takes specifically to harvest imagery, as well as her wanderings. “Every time I look at the landscape I’m looking at paintings,” she explained. “It’s hard not to be working.”

The first order of business, after finding and photographing a landscape, is to eliminate the elements that Strasburg considers excessive. Her paintings are about her own experience of the space, rather than capturing an exact depiction of a particular scene. This process lends her images a universal quality that appeals to art buyers who hail from all corners of the country. Strasburg surmises that she learned to simplify from her father, who was a theatrical set designer. 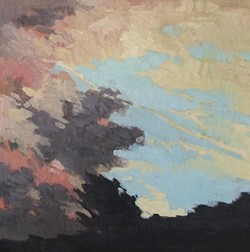 Strasburg works from her studio, citing painting en plein air as too stimulating. Her current pastime, while painting, is listening to audio books, the classics she never had a chance to read in school. The voice silences her inner critic, allowing her to paint continuously without questioning her use of a particular color.

As exhibit facilitator, the Central California Museum of Art sought out Strasburg. Fuglie visits Santa Barbara on a monthly basis and the powers that be introduced him to her work.

She’s represented by one of Santa Barbara’s more prestigious galleries. Having a curator organize everything, from selecting the paintings to titling the exhibit, was an unexpected boon. The painter operated a downtown gallery to promote her work for more than a decade, and knows the organizational challenges that attend such an effort. The more art facilitators there are, the more time she has to dedicate to painting her local infernos. And the more time local venues, such as ARTS Space Obispo, have to commit to myriad other programs and events.

Arts Editor Ashley Schwellenbach would be a pyro if fire didn’t scare her. Send unlit matches to aschwellenbach@newtimesslo.com.