One Brew to rule the world

Am I the only one who’s noticed that the local music scene is going off like a frog in a sock? I always marvel at the number of shows we have in relation to our population. Between The Z stepping up to the plate, Frog and Peach continuing its relentless march, all the coffee shops, Steve Key’s Songwriters at Play showcases, the PAC, the Clark Center, Steynberg, the house concerts, Mongo’s, Sweet Springs, Old Cayucos Tavern, the Pour House, the Fuel Dock, the … well, I could fill half a page naming all the places live music turns up. 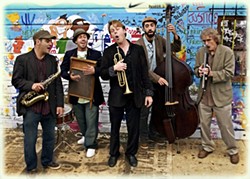 For my money, the granddaddy of them all is SLO Brew, which for almost 25 years has been bringing music to the masses. The venerated venue kicks things off this go-round with The California Honeydrops on Thursday, Feb. 16 (7:30 p.m.; all ages; $10 presale or $12 at the door), with Bentley Murdock opening.

Formed four years ago in Oakland’s subway stations, they’ve since completed six European tours, played all over the United States, and released two full-length albums without a label or booking agent! Sometimes talent and will power are enough!

Hot reggae act Iration will play a rare double night at SLO Brew on Friday and Saturday, Feb. 17 and 18, but if you want to go, too bad, because both nights are already sold out! Sorry, Charlie!

You can, however, still buy tickets for DJ Quik for Sunday, Feb. 19 (8 p.m.; 21-and-older; $24 presale or $26 at the door). This hip-hop extravaganza also features performances by Public Defendaz, Mic Bles, and D&A.

On Fat Tuesday, Feb. 21, you can get your Mardi Gras on when the Zongo! All Stars hit the stage with opening act Burning James and the Funky Flames for a costumed, bead- and doubloon-filled boogie down night of dancing and debauchery (7:30 p.m.; 21-and-older; $10 presale or $12 at the door). “We’re really trying to breathe a little more life into Fat Tuesday to get some of the good old days back into SLO,” said Zongo bandleader Paul Irving. “We’ve got support from the krewes, are encouraging costumes and outrageousness, and we’re decorating the room, having beads and all that.” Let’s bring back Mardi Gras, people!

Finally, on Wednesday, Feb. 22, G Love & Special Sauce returns to the club with opening act Scott H. Biram (7:30 p.m.; 21-and-older; $25). G Love brings tangy Philly-style back porch music to the club—it’s sort of a mix of blues, folk, hip-hop, and East Coast cool. Scott H. Biram is a personal favorite, an Austin-based, rough-around-the-edges, growling, gutbucket guitaring, despairing, entertaining S.O.B. His records are a perfect precursor to a knife fight, a night in the drunk-tank, or open-heart surgery with no anesthetic.

The series returns to Laetitia Winery on Saturday, Feb. 18, co-featuring Owen Plant, Phoebe Light, and Billy Estrada & Tony Kirkorian of the band Spoonfed Lightning (1 p.m.). Jamaican-born troubadour Owen Plant sounds like one of those introspective songwriters from the ’70s, but with some island style thrown in.

Then the week winds down with folk singer and raconteur Richard Berman on Tuesday, Feb. 21, at Kreuzberg. This is a guy Utah Phillips called gifted (6:30 p.m.). 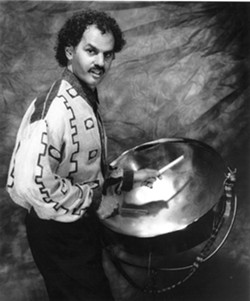 Amazing steel drummer Jeff Narell is coming to Steynberg Gallery on Wednesday, Feb. 22, at 7:30 p.m. ($15). He’s in the area to offer a workshop at Old Mission School, and since he was already in town … well, why not give locals a taste of this incredible performer on this truly unique instrument?

Narell first came to prominence when he appeared on the Ed Sullivan Show as a kid. He also studied in the 1960s with Ellie Mannette, the principle inventor of the modern steel drum.

Since then, Narell has become an educator and proponent of the instrument, performing with the likes of George Benson, the Grateful Dead, Bobby McFerrin, and Olatunji. If you’ve seen the films Commando or 48 Hours, you’ve heard his music.

Don’t miss your chance to see this incredible performer.

It’s been quite a while, but I’m happy to announce that the Christopher Hawley Rollers will return to SLO on the Northern California leg of their winter tour, stopping at Frog and Peach on Thursday, Feb. 16, at 10 p.m., to deliver socially conscious, good time rock ’n’ roll. Hawley’s band features members of Little Feat and Fishbone.

On Thursday, Feb. 16, Decker rolls through Paso with his full band to play a gig at The Pour House with local favorites The Ragged Jubilee and Carbon City Lights. This show is a warm-up before Decker heads to Austin for the upcoming SXSW, offering up a dose of his patented “desert folk, whiteboy-gospel” to the famed festival.

Wonderful touring guitar and ukulele duo Victor & Penny return to the area to play Linnaea’s Café, where they’re sure to captivate audiences with their music of the 1920s and ’30s done with a modern twist that they call “Antique Pop.” The show, on Friday, Feb. 17, runs from 8 to 10 p.m.

Due to popular demand, D’Anbino Vineyard and Cellars is bringing back The Salty Suites on Saturday, Feb. 18, from 8 to 10 p.m. ($10, or $5 for Record Club members. “The Salty Suites absolutely rocked the house on their previous visit!” gushed organizer Carmine Rubino. “If you missed their last show, don’t miss this one! We will be doing a live recording of their show.” This is one helluva bluegrass act featuring mandolin prodigy Scott Gates, who’s worked with everyone from John McEuen, Nathan McEuen, and Steve Martin to the Nitty Gritty Dirt Band and Kenny Loggins.

Sweet Springs Saloon is host to two awesome bands this Saturday, Feb. 18, when The Koopas open for local faves The Booker Tease (9:30 p.m.; $5). Booker pays tribute to Booker T. & the M.G.’s. According to band member Frankie Van Hooser, “The Koopas are the Central Coast’s best (and only) video game cover band. We are five musicians with a love for video games and music. We play rock and metal covers of popular old school video games like Super Mario Bros. and The Legend of Zelda.” Sounds weird good, no?

The Plastic Revolution storms into the Frog and Peach on Saturday, Feb. 18 (10 p.m.), fresh off a debut tour in Europe. The San Diego-based band is touring in support of their sophomore album Postmodern Medicine, which just won independent album of the year from Ladylake music awards.

Despite the temporary loss of the Hamlet as it’s closed for remodeling, the Famous Jazz Artist Series continues on Sunday, Feb. 19, at D’Anbino, which has graciously offered its space until the Hamlet reopens. The first concert features fast-rising young L.A pianist Joe Bagg in a tribute to the music of Richard Rodgers and Lorenz Hart. There’s a 1:30 to 4 p.m. show for $15 or a 5 to 6:30 p.m. show for $12. See both for $20 (927-0567). 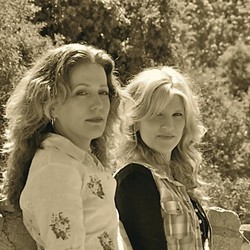 You can hear some original songs and stories of faith when Christian ensemble The Sweet Potatoes plays SLO’s United Methodist Church at 4 p.m. on Sunday, Feb. 19. The show features Laura Hall (the keyboardist for Whose Line is it Anyway?), Kelly Macleod (opening act for Van Halen’s OU812 Tour), and Rick Hall, a veteran of The Second City, Chicago’s premier improvisational comedy stage. The concert is free, and all are invited.

Singer-songwriter Jay Horn and special guest Jody Belsher will appear in concert on Sunday, Feb. 19, at 7 p.m. ($10) in the Steynberg Gallery, with a portion of the proceeds to benefit GleanSLO. Jody will open the show with a set of original songs on piano. She and Jay will join on a few songs, and Jay will do a set of original and cover songs on guitar. 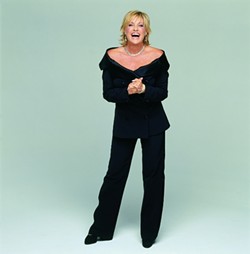 Move over Liza with a Z, because Judy Garland’s other daughter, Lorna Luft, is coming to the Performing Arts Center on Sunday, Feb. 19, at 7 p.m. This celebrated live performer; stage, film, and television actress; bestselling author; recording artist; and Emmy-nominated producer puts on the kind of good old-fashioned extravaganza that would make her mom proud. It also helps that she’s performing songs from her new album Songs My Mother Taught Me. Student and adult tickets range from $16 to $38 (756-2787).

Collective Efforts Events brings legendary DJs and producers Donald Glaude and Worthy to Cielo Cantina, on Sunday, Feb. 19, for an evening of awesome house music. Glaude, who’s ranked 69 on DJMag.com’s Top 100 DJs List in 2007, originally found his love for sound with classical music, trained in the upright bass and violin. Worthy was pulled into the electronic music scene in the late-’90s after moving to New York City. The night will start with opening sets by Kevlar and Hi-Tem, and drink specials for attendees 21 and older. Tickets for the event are $15 for 18- to 20-year-olds and $10 for those 21 and older. Buy them online at noschoolslo.eventbrite.com.

Portland-based funk rock trio Dorado plays the Frog and Peach on Tuesday, Feb. 21 (10 p.m.), touring in support of Say What You Mean on Backline Records.

MoTav is getting in on the Fat Tuesday, Feb. 21, action when Tropo headlines a show called “Naughty Gras” with DJ Dionysius and Audiobit. Get yourself decked out in your Mardi Gras finest and get ready to laissez les bon temps roulez!

Man, oh, man, this year’s Live Oak Music Festival just got even better! Organizers just announced that the Indigo Girls will close the festival on Sunday, June 17. This year’s line-up already includes Rebirth Brass Band, Carolyn Wonderland, John Doe, James McMurtry, Oscar Hernandez, Nicki Bluhm and the Gramblers, Quinn DeVeaux and the Blue Beat Review, Andre Thierry and Zydeco Magic-Zydeco, Melody of China, and Round Mountain. If you’ve never been, it’s never too late to join the Live Oak family in what is the best music and camping weekend ever. Visit liveoakfest.org for details.