Potted Potter is a boisterous comedy show that condenses all seven Harry Potter books into 70 minutes. I am baffled by how this production—which comes to the Cal Poly Performing Arts Center on Sunday, Nov. 17—can be performed by two British muggles without the aid of spells, but luckily I scored a confab with Potted Potter star James Percy. I wanted to grill him on whether it will be a Sirius production or whether we are in for a Riddikulus time. Predictably, we concluded the interview by talking about the weather and how delightfully sunny it is in California compared to our native, dreary England. But I digress! For all you pot-heads, here’s a little more on the show. 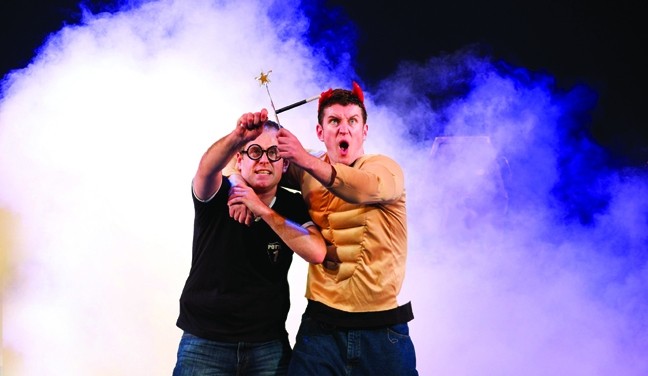 NEW TIMES Where did the inspiration come from for Potted Potter?

JAMES PERCY Well, it came from two guys called Dan and Jeff. Around 2005, they were asked to do something to entertain the crowds in Edinburgh as they waited for the launch of the sixth book. It started from very humble beginnings, just a piece of street theater to recap the first five books for the crowd, and they went crazy, they loved it.

NT So is it an easy thing to do to condense the books? Do you focus on key themes?

JP It’s done as a parody; it’s done very much from a comedic side. A lot of inspiration was from the Reduced Shakespeare Company, and the show has a strong Monty Python influence. It was so well received, so that as the sixth and seventh books came out, they added those books in. It became a full-length show, which they took up to the Edinburgh Fringe Festival. A West End producer picked it up and the show has escalated—

it’s been all over the world. I came on board in May this year, handpicked by Dan and Jeff to take the show on the road, and take it on to new audiences.

NT So you aim to provide a fresh take on the production?

JP Well, it’s heavily improvised. Me and Del [that’s Delme Thomas, Percy’s co-star], we improvise a lot during the show. If you see the show on Monday night, the show you see on Tuesday night will be completely different. As a performer it’s great to have that freedom to keep it fresh, play with the audience, play with whatever happens on the night. It can never get boring for us as we change it all the time. It’s a lot of fun.

NT Is there a set script, or is it purely improvisation?

JP No, it's 60 to 70 percent scripted and that gives room for about 30 to 40 percent improvisation. We know where we are starting and we know where we need to get to, and the route we take differs from show to show.

NT What part are you playing?

JP I play Harry, and Del has the joy of playing every other character.

NT Yikes! Every other character?

JP Well, I drive the plot and Del gets the energetic job of running between roles. I let him wear himself out.

NT Is the humor aimed at a predominantly British audience? Puns, local dialect, references? Do you adapt them in accordance to the audience you are presenting to?

JP Yeah, I mean, I suppose so. We were really surprised just how well it was received in America. I suppose for us it does feel kind of British and it does feel that it has a pantomime feel to it. But audiences all over the world, America included, have absolutely loved it. We have been very fortunate. There are times we try a new joke, or a line, and realize quite quickly that that joke might not translate to an American audience, but as long as we point out exactly what we have done, the Americans seem to laugh along knowing they can’t understand it.

NT I once saw a clip with Daniel Radcliffe that was heavily edited to suggest that Daniel, in fact, thought he now truly was Harry Potter. Would you say that after the show, you too believe you are Harry Potter?

JP I haven’t seen that! I’ll have to look it up. As it happens, I haven’t suffered that yet. I mean, to be fair, I’ve only been doing it since May, so when I speak to Jeff [the show’s creator and original Harry Potter character] later today, I’ll ask him that question—he’s been playing Harry Potter for about seven years now.

NT You really should; it could be a serious dilemma.

JP Well, I think you know it’s happened when Jeff is sitting eating his breakfast trying to heat it up with a spell—that’s when things get crazy.

NT Do people dress up for the performance?

JP They do! It’s very cult-y; it’s almost like being at a Rocky Horror show. We get full families dressed up—we had an entire Malfoy family. It’s always so impressive. We’ve met a few University Quidditch teams, which is a bit exciting. Again, before the show I didn’t realize that Quidditch had become an actual sport that people go out and compete now.

NT Oh, it’s definitely a thing. I was actually part of my University Quidditch team. I was a very bad Chaser.

NT Yeah, but you didn’t want to be the golden snitch because you had to leg it around campus in a tight gold leotard …

JP Well, as you’ll see from the show, that’s one of my privileges—to be the golden snitch.

JP Del sings a lot in his dressing room when we are warming up for the show, and I’ve often heard him singing R. Kelly’s I Believe I Can Fly. So from that, I would clearly choose Wingardium Leviosa, just to make that dream come true for him, and hopefully stop him singing that terrible song.

NT Do you need to have read the books to enjoy the show?

JP No, not at all. I’ve had family and friends come and see the show, all of whom have not read a single page of Harry Potter, and they all absolutely loved it. Ninety percent of the comedy comes from watching two guys on stage trying desperately to get through all seven books in 70 minutes. All you really need to know is that Harry Potter was a boy wizard, and unless you’ve been living under a rock, I think everybody is up to speed.

… And then we discussed British weather for an unnaturally long time. Follow James on Twitter at @james_percy.

New Times contributor and person from another country Clementine Gray can be reached via Arts Editor Anna Weltner at aweltner@newtimesslo.com.