Time for a not-so-artsy-arts-editor confession: Most concerts are just too long for me. About halfway through most of them I get antsy, bored, and just want to go home.

It's a tad embarrassing since I do have an adult-sized attention span in others arenas of entertainment, just not concerts. But a Chris Thile concert is one of the few that can hold my attention from beginning to end and still leave me wanting more.

I walked into the Cal Poly Performing Arts Center Monday night just as excited to see master of the mandolin Thile perform, as I had been the previous two times. (The first was Thile with The Goat Rodeo Sessions collaborators Yo-Yo Ma, Stuart Duncan, and Edgar Meyer. The second time was when Nickel Creek was promoting their latest album, A Dotted Line.) Abstract star-shaped lights hanging above the stage set the mood.

Multiple Grammy Award-winner and MacArthur Fellow Thile—who is also a member of Punch Brothers and Nickel Creek, and is a mandolin virtuoso, composer, and vocalist—rocked his solo show at the PAC.

The set of the show, much like Thile’s style, had a broad range, moving from Bach sonatas on the mandolin to some of Thile’s original work like “Too Many Notes” and “Song for a Young Queen” (inspired by Natalie Portman being cast as Queen Amidala in the Star Wars prequel trilogy) and solo versions of Nickel Creek songs like “Jealous of the Moon” and “The Lighthouse.”

For those unfamiliar with Thile’s work, he encompasses classical, jazz, rock, and bluegrass. In my world, there are two types of musicians: Those who have an amazing amount of pure God-given musical talent, and those who are amazing performers that know how to put on a show. Thile is one of the rare musicians who straddles both categories. He could just show up, simply stand there, and play his mandolin and that would be enough. But Thile can play and make an audience laugh like no one’s business. At the end of the show, my friend April, one of my concert companions for the evening and a Thile-newbie, whispers, “He’s amazing,” into my ear with an awestruck voice. 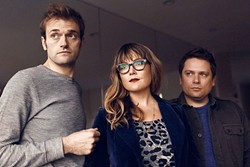 Thile, his hair forever askew, throws his whole body into his playing as though he’s trying to physically shake the music out. At this show he plays a joking little ditty for the audience that includes the line: “Obispo is abysmal to sing.” Thile even regales us with his own musings on how the Garden of Eden was guarded (by cherubim with poisonous spit glands and flaming swinging swords in case you were wondering) before playing Daughter
of Eve.

Ryah Cooley has no musical abilities whatsoever at rcooley@newtimesslo.com.