Andy Warhol had his soup cans, Howard Kline has his sunglasses, Robin Bell has her plastic spoons, and David Edgar has his laundry detergent bottles. And all of them except the late Warhol will showcase their ability to transform mundane objects into elegant, humorous, and gritty works of art at the Art Center's exhibit, Funky Junk, The Art of Recycling.

# Most of the participating artists who each contributed one piece to the show hail from California, but some of the creative recyclers are from as far away as New York and Florida. Being told to create pieces from recyclable materials doesn't seem to have limited the artists' palettes. If anything, they responded to their challenge with a degree of ingenuity only true artists could supply.

"Artists are absolutely the best recyclers and re-users, and this is just a celebration of that," said curator Amy Grimm. "That's why I love artists. They help us look at things in a new way."

While beer cans and plastic bottles do make an appearance in the show, many of the pieces don't have any visibly obvious connection to the concept of recycling.

One piece, Being a Man, makes liberal use of miniblinds. Christopher Watts collected glass from a broken bottle in the street near a statue of Jesus, and cast the glass into molds from the original statue, creating The Green Jesus, whose hands and face appear to be emerging from the wall. Modern and clean pieces contrast with the grittier, funkier displays. Some pieces, like the adult-sized onesie from a performance piece in which a grown man demands to be fed, have a back-story as fascinating as the art itself.

"I think the eclectic nature of the show is a good thing," Grimm said. "It's sort of reflective of the idea."

And don't let the terms "junk" or "recycled" fool you. These artists are as particular about their materials as only perfectionists with a vision can be. Bell made her recent plastic spoon masterpiece, Spoonerism 2008, from 2,008 plastic spoons produced by Solo. 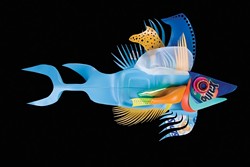 # "The Dixie brand gives off this blue hue, which is kind of nice, but the Solo spoons have a creamy, more of a quality look, but they're also more difficult to deal with," Bell explained.

Given that she literally spends hundreds of hours working on each sculpture, it makes sense that every detail like the quality and hue of the spoons she works with is the product of intense scrutiny.

Bell painstakingly cuts each spoon, removing the bowl which will be used in the sculpture from the handle, which she keeps for some future project. She then carefully polishes each bowl.

"It's a ridiculous amount of consideration just to get a perfect edge on each spoon, but it has to be perfect," Bell insisted.

For the sake of self-preservation, she cuts and polishes no more than 200 spoons at a time, usually from her patio where she can look out over San Luis Obispo while she works.

Finding the best method to cut and polish a plastic spoon required a great deal of experimentation, not to mention collaboration with sharpening guru and hairdresser Jason Pintel. Plastic spoons, the pair learned, do not want to be cut. But that didn't stop the duo from discovering a way to both cut and polish the spoons without damaging the bowl the details of which are something of a trade secret and won't be disclosed.

Bell can't recall how she lit upon plastic spoons as a suitable sculpting material, though she suspects she was at a picnic playing with the flatware when the idea came to her. Ultimately, she credits her fascination with shape for motivating her to work. As a child, she enjoyed setting the table because it allowed her to stack the silverware.

"I guess the idea that the natural shape of things can be nested and built upon, that's the appeal to me," she said. "I think it's so wonderful to be presented with a shape and then transform it into a phenomenal shape."

# Ultimately, the sculpture shapes itself, according to Bell, curving and twisting like a white, tentacled monster. Occasionally, she glues the spoons in reverse order of their natural curve, with the fractured handles sticking up a sharply sloping spine. Spoonerism 2008 is her first sculpture to incorporate a non-white spoon: a single black spoon rests at the end of a long, white spiral.

Prior to her decision to approach spoon sculpting as a serious art, Bell used her material of choice to make table lamps and wedding gifts. It's been three years since she started working on her first piece, which was purchased by a San Francisco resident who runs a wedding business out of his mansion. The second and third pieces both commissioned were purchased by art collectors. It's difficult to say where Bell's most recent and largest creation will end up after the five-week exhibit at the Art Center. It was recently on display in a local doctor's office, and before that, it was in an exhibit in Sausalito.

"I'd love to have it in the airport because I think it's a great piece of public art," Bell said. "It's whimsical, but it's elegant. And I have a real affinity for the airport."

The proud artist likes to see her spoon sculptures in public spaces where people can feed off of each other's interaction to the unexpected material. After all, plastic spoons aren't supposed to be beautiful. They're for eating macaroni salad and Jell-O during a picnic. Unless, of course, you're an artist existing in a mad, delightful world where a laundry detergent bottle is meant to be a fish, a broken bottle can become a religious effigy, and plastic spoons arc gracefully through the air.

The Art Center, located at 1010 Broad St., hosts The Art of Recycling Aug. 18 through Sept. 24. An opening reception will take place Aug. 18 from 6 to 8 p.m. For more information, visit www.sloartcenter.org.