One path to connect them all

Eric Meyer pushes the county to move beyond plans

“There’s two ways through there.”

Eric Meyer puts on his reading glasses and points to a map spread across the table in front of him, specifying a section of land in Pismo Beach owned by Union Pacific Railroad. General Washington couldn’t have looked more serious charting his course across the Delaware, but then, Washington was just looking to move a couple thousand soldiers; Meyer is hoping to facilitate a path for tens of thousands of cyclists, walkers, and hikers. 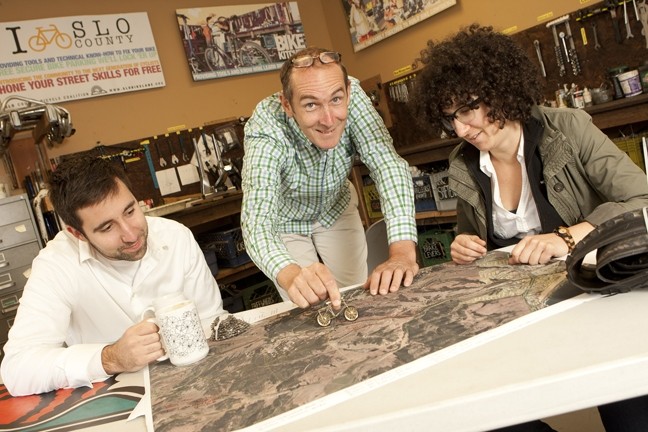 The riddle of how to piece together enough land to create a Class 1 bike trail between San Luis Obispo and Pismo Beach has no simple answer, with a half-dozen private property owners—including Union Pacific Railroad and Plains Exploration and Production Company—currently standing in the way.

But Meyer—an entrepreneur, bike nut, San Luis Obispo planning commissioner, and now unauthorized intermediary on behalf of the historic bike path—is hoping the recent availability of two parcels of land in Edna Valley will serve as the jumpstart that city and county public agencies need to take the trail from “plan” to project. On his blog, themovement.com, Meyer points out that SLO County’s Edna Los Ranchos Specific Plan, drafted more than 25 years ago, called for a trail in the same location. But while there have been many “plans” calling for bike trails and citing their importance, few have moved any further along.

“Had we started actually doing something then … we would be DONE NOW,” Meyer exclaims in a blog post.

“All my life I’ve not planned,” he explained. “I’ve done. And the one difference between the two is starting.”

In the 3 1/2 weeks since discovering the properties were for sale, Meyer is already in escrow for both properties and is currently coordinating with SLOCOG in the hopes that they’ll purchase it back from him and use it for the Class 1 bike trail. He spoke at a Board of Supervisors meeting encouraging county supervisors to help push the effort forward. He acquired letters of support from the city of SLO, Pismo Beach Parks and Recreation Committee, Land Conservancy of San Luis Obispo County, and San Luis Obispo Parks. He spoke at a SLO City Council meeting urging their support, which he sort of has.

“I’m an enthusiastic supporter,” said Mayor Jan Marx, who agreed to write a letter supporting the project concept, but who insisted the project falls under the county’s jurisdiction. “It’s very unlikely that the city would be able to financially support it in any way.”

Meyer is hoping to be reimbursed to the tune of $450,000, and willing to give the county a year to locate the funds. Together, the two properties run a little more than a mile, just a tiny fraction of the space required for such a project. But Meyer calls them “the crux of what is happening right now.”

Thus far, no one has outright opposed his plan for the trail—which bike proponents hope would ultimately become part of the as-yet nonexistent Juan Bautista de Anza trail between Mexico and the Bay Area—but the response from various public officials is cautious.

While Black supports the idea of a Class 1 trail between SLO and Pismo Beach—it has, after all, been part of the county plan for several decades—he insists it’s too early to tell how it will eventually come about. Typically, funding for such efforts comes from Park Facility Funding Fees, but there are 33 projects currently competing for that money, and it’s a question of which is deemed most significant. The Parks Commission is coordinating with SLOCOG and the Land Conservancy to try to get the ball rolling financially, and hoping to identify individuals and private businesses willing to assist with funding.

And right now, there’s too much uncertainty to identify what the final cost will be. Black points to a bike trail from Hanford Pier to Avila Beach that’s currently going through the planning phase to the tune of $50,000. And that figure doesn’t even take construction into account.

“This is a huge opportunity,” Black said, “but there is a lot of information that we don’t have that means it’s difficult for us to throw our full weight behind this. …[Meyer’s] an entrepreneur and that is the role where the entrepreneur roles the dice and takes a risk. The role of county parks in spending public money: We have to be a little cautious with public funds.”

The next step, from Meyer’s perspective, is the April 26 County Parks Commission meeting. He hopes to the convince the commission to propose that the board of supervisors pull park facility funding fees. To that end, he’s looking for as many warm bodies as he can find to attend the meeting in support of the new route. The SLO County Bicycle Coalition will throw its weight behind the effort, which is accidentally perfectly timed to coincide with Bike Month.

Marketing & Outreach Coordinator Leslie Bloom is particularly interested in the distinction between a Class 1 and Class 2 trail, the former being separated from roads used by automobiles, which are typically too dangerous for families—and even many adults. The thoroughfare between San Luis Obispo and Pismo Beach would more than double mileage for existing Class 1 trails for the entire county, and serve as a point of connection between various bike trails.

Connectivity is a bit of a buzzword among cyclists right now. To illustrate the significance of this, Meyer pointed out that most people who use the Bob Jones Bike Trail have to load their bicycles into a car and drive to the trail, causing him to dub it “the soccer mom trail.” Still, completing the Bob Jones Bike Trail remains the bike community’s No. 1 priority and Meyer’s not trying to compete for precious funding or attention.

“I don’t want to steal funds from the Bob Jones Bike Trail—or not too much anyway,” Meyer insisted.

Even under Meyer’s best case scenario—the funds somehow come together and the many requisite agencies provide their stamp of approval—don’t expect to be pedaling through Price Canyon on anything besides the shoulder of the road anytime soon. For perspective, it took Juan Bautista de Anza just more than five months to travel 1,210 miles from Tubac, Ariz., to San Francisco in the late 18th century.

“These types of trails typically take in terms of decades,” Black cautioned. “It takes a great deal of time and some luck. And maybe this is some type of luck.”

But Meyer is cautious about looking that far out.

“This is what I call a legacy project,” he said. “It will get built. But it will never get built if we don’t take this first step.” ∆