Back in 2009, during the inaugural New Times Music Awards, Red Eye Junction entered a song called “Home Ain’t So Sweet,” a classic-sounding country tune penned and sung by then-band-member Jon Clarke. It won the first ever NTMA “Best Song.” Shortly thereafter, Clarke left the band to do his own thing.

He’s been keeping a pretty low profile, gigging with Texas soul man Joe Koenig and song angel Natalie Haskins as a trio called Clarke, Koenig, and Haskins, but he’s also been secretly penning a whole slew of equally crafty tunes he’s about to foist on unsuspecting country fans during a series of four upcoming shows with the trio: On Thursday, April 5, they’ll do a free 5:30 p.m. in-store at Boo Boo Records, and then at 7 p.m. at SLO Brew they’ll open for Brokedown in Bakersfield (21-and-older; $12); then Clarke and company play SLO Down Pub on Saturday, April 15, at 5:30 p.m.; and finally the three appear at the Avila Beach Carnival on Saturday, April 22, at noon.

As Clarke explains the bevy of shows, “We gotta do it right and get ’em in before Nat [Natalie Haskins] moves to Hawaii in May.”

As for Clarke’s new album, Songs to Travel By, it features some exceptional musicianship. “The Man You Hoped I’d Be” starts off with some fine picking, which is soon joined by pedal steel and Clarke’s radio-friendly tenor.

These are heartbreakers, folks, and Clarke says, “The songs are autobiographical in nature and speak true of life, love, and heartache. The way good ol’ Americana was meant. They also speak of one man’s perception of the road we are all traveling down—the rocky road of life.”

Clarke’s a real storyteller, and on tunes like “Carry Me Love,” with backing vocals by Haskins, you feel the weary sadness of a man abandoned.

“This record includes many of my favorite Central Coast musicians: Natalie Haskins, Joe Koenig, Bob Hamilton, and Wyatt Lund, just to name a few,” Clarke said. “It has had the feel of a family effort and, man, that’s what makes it so truly enjoyable and fulfilling. Hopefully folks will enjoy these songs as much as we’ve enjoyed recording them.”

Don’t think it’s all doom and gloom, however; on “Ensenada,” Clarke picks up the tempo for a classic honky-tonk track. And after the 10 tracks are over, don’t turn off the CD player quite yet. Wait a few minutes and you’ll hear “One People,” a hidden reggae track!

Three of the area’s best singer-songwriters gathered together? Yeah, these shows ought to be pretty amazing.

Oh, and for those out of the loop, Brokedown in Bakersfield is The Mother Hips’ Tim Bluhm and his wife Nicki’s (of The Gramblers) newest side project, a group that also includes Lebo of ALO on pedal steel, Scott Law on Telecaster, and ALO rhythm section partners Steve Adams and Dave Brogan. They play covers by the likes of Merle Haggard, Buck Owens, and Gram Parsons, as well as originals inspired by the Bakersfield sound.

And Jon Clarke isn’t the only fella releasing a new record this week. 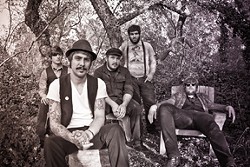 The Ragged Jubilee is gonna save your soul with In the Valley, the band’s newest stompfest that kicks off with a lo-fi roadside tent revival that segues into “Whiskey,” a harmonica driven, jangling, Tom Waitsian-vocalized blues burner.

I really enjoyed the group’s first full-length album American Moan, but the band turns its gritty rock’n’blues act up a few notches and delivers an emotion-drenched cavalcade of Americana tunes filled with banjo, sitar, trumpet, and the usual guitars, bass, drums, and keys backdrop.

There’s no denying lead vocalist Ethan Burns’ voice, a gritty, alive thing that will not be ignored. And the hook-laden tunes are wholly infectious. With the crunchy guitars and psychedelic feel of “Wonderin,” it could have been released in 1975. This is an American band. They sound like some deep-fried badasses.

You can witness the madness-inducing joy of The Ragged Jubilee on Friday, April 6, at SLO Brew (7 p.m.; all ages; $11 presale or $14 at the door). The excellent pop act Threes and Nines will open. Miss this show at your
own peril.

“Entertainers have the power to make someone’s day or ruin it,” Heckendorf said. “So I do everything I possibly can to bring people raw joy, which means setting an example by shedding all my insecurities and going as hard as I possibly can when I’m onstage. That’s the only way there can be a real give and take between the audience and me.”

Steve Key’s Songwriters at Play showcases kick things off on Thursday, April 5, at The Porch with San Diego’s sort of country artist Sara Petite (6:30 p.m.; all ages; pass the hat). “I don’t always consider myself a country artist,” she said. “My songs range from bluegrass to country to rock’n’roll, but I know my voice sounds distinctly country.” Gary Garrett and Rob Kimball will be among the guest performers.

On Sunday, April 8, Petite returns to play Sculpterra (1 p.m.; all ages; pass the hat), with special guests Jake Hill, Will Knox, and Alec Gross, the three of whom will share a triple bill on Tuesday, April 10, at Kreuzberg (6:30 p.m.; all ages; pass the hat). The three East Coast musicians (well, technically Knox is a U.K. transplant who at 18 moved to Boston to pursue his music career) have been touring the nation and recording on their own label, Handsome Lady Records. Gross played Kreuzberg last year (the guy with the flaming red hair and the big voice). Knox has opened shows for the likes of Art Garfunkel, Sami Yusuf, and Tyrone Wells. Hill is a singer-songwriter from Plymouth, Mass.

Paso duo Shaufrau and Hollywood’s The Dead End Gypsies are sharing a bill at Last Stage West on Friday, April 6, at 6 p.m. Call (461-1393) for dinner reservations!

The Z Club is set to deliver another evening of foot-stomping music on Saturday, April 7, when The Dirty Stomp, The Roos, and Dead Volts play a triple-header (21-and-older; $5 before 9:30 p.m.; $6 after). Fresno’s Dirty Stomp also plays The Pour House the night before, on Friday, April 6, with Poor Man’s Poison.

The Mighty Fine has some mighty big, mighty retro news. They’re releasing their last album, Revival, on vinyl! “We’re absolutely stoked!” gushed Brook Thompson. “We’re playing a couple of local vinyl release shows.” See them Friday, April 6, during a free in-store show at Boo Boo Records at 6 p.m.; then on Tuesday, April 10, they’ll be at Skip Gibson’s BBQ in Santa Maria at 8:30 p.m., with The Shell Corporation, The 1st Line, and Landmarks ($5).

The Northstar Session is back in the area with a series of three shows: Friday, April 6, from 9:30 p.m. to 12:30 a.m. in Arroyo Grande’s McLintock’s; Saturday, April 7, from 10:30 p.m. to 1:30 a.m. at Frog and Peach; and Sunday, April 8, at The Cliffs from 11 a.m. to 2 p.m. “Since we played SLO in the beginning of January, we’ve been all over the country,” said front man Matt Szlachetka. “We did a three-week East Coast tour, just got back from a week of shows between Mammoth and Tahoe, and also recorded a live acoustic album entitled Echoes From the Canyon, which is due out sometime between April and May.” Check out these pop-country jammers.

The Ballistic Cats will bring their old-school rock’n’roll to The Pour House in Paso Robles on Saturday, April 7, from 8 to 11 p.m. If you dig roots rock the way it sounded 60 years ago, check out this tight trio. 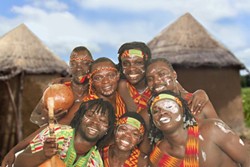 Billy Foppiano wrote to tell me about a great show coming up: “From the bush of Africa, Napoleon, Joseph, Issac, Mosses, and JJ Sabbah emerge. The African Showboyz hail from Binaba, a tiny village in the northeast region of Ghana, West Africa. In Binaba, there is no electricity, nor an opportunity for education, but through sheer determination and an intense respect for humanity, the African Showboyz have bridged borders; mesmerizing and enchanting audiences throughout Africa, France, and Germany. This tribal quintet is a unique blend and remarkable experience of African drum, dance, magic and adrenaline. When attending a Showboyz performance, prepare yourself for a world-class raw-roots experience. From tribal drumming and dance to phenomenal glass eating and mystical fire twirling; from comic routines to magic, all will be entertained,” he wrote before adding, “Meet the Foppers will open at 7:30 p.m. at Otter Rock on Saturday, April 7.” Intriguing, no?

On Saturday, April 7, The Steynberg Gallery is host to Wahid, a duo “bound to a rich cultural history of ancient civilizations and melodies, incorporating instruments that were first documented on clay tablets and papyrus scrolls,” according to their press materials. “By adding personal modern elements, a new style of music is created that looks to Byzantium and the Levant for melodic inspiration. Wahid is a dialogue between two unique voices that brings together boundary-crossing approaches to composition and improvisation that defy genre. Chris and Dimitri have collaborated for over 15 years in world music and jazz contexts. Their musical kinship has evolved into a rendering of melodic and soundscape-driven events that inspires the lives and imaginations of its listeners.” (8 p.m.; all ages; $15).

Terrific jazz vocalist Margie Nelson will take the stage at D’Anbino on Saturday, April 7 (8 to 10 p.m.; 21-and-older; $10 admission, or $5 for Record Club members). Sweet and sultry, Nelson will be backed by the West Coast Jazz Cartel to perform select jazz standards.