Twenty years ago, Rhone wines certainly didn’t have the cachet they do today, now that so many more Americans have become aware. Wine consumption is rising in America, partly thanks to millennials who realized that perhaps those boomers (or old geezers to them) have it right when it comes to wine appreciation. The upcoming Hospice du Rhone is proof that such wines as Syrah, Mourvedre, Viognier, and Roussanne, or blends of Rhone white or red wines, are no longer favored solely by winemakers and wine geeks. The general public is discovering that the joy of wine appreciation is hardly limited to Chardonnay and Cabernet Sauvignon (although they are still the best-selling varieties in the United States). 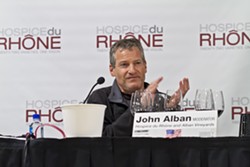 A true wine lover knows that it’s all about staying open-minded to new experiences, which are more likely found while tasting distinctive varieties like Grenache, Marsanne, and Picpoul Blanc. That’s why a tasting event like HDR continually grows in popularity—even after 20 years. It presents the finest Rhone wine producers in America, and the best from France, Spain, Chile, South Africa, New Zealand, and Australia. HDR also deserves credit for spotlighting Paso Robles among the most prominent destinations on the world map for wine connoisseurs.

Twenty years ago, varieties like Syrah, Grenache, Viognier, and Roussanne—among 18 other red and white Rhone wines—needed something more than the second shelf in the grocery store. HDR came into being after an ardent man with a vision named John Alban made a name for himself by planting Viognier and Syrah in Edna Valley. It was 1986, and there were only a few vintners around him, but they considered it Chardonnay country. Leave it to Alban to be the contrarian.

Besides being the first in Edna Valley to plant Rhone varieties, he was the first American vintner/winemaker to establish a winery devoted exclusively to the production of Rhone wines: Alban Vineyards. He attended the first Rhone tasting celebration back east when there were only 22 wineries in attendance. Alban is the founding director of HDR and the only winemaker who can claim he’s never missed a single event in the 20 years it’s taken place. This year, he’ll be celebrating at the 20th anniversary reunion event. Although he said he plays more of a background role, he wouldn’t miss it. The HDR celebration wasn’t large in the beginning, but it didn’t take long to become an international celebration, attracting hundreds of vintners and wine lovers.

“When HDR started, it was nothing and deserved to be nothing,” Alban said modestly. “But it definitely took off. HDR changes each year, which is the reason so many return annually from around the world.”

Over the first five years it was a one-day event, but it became a multi-day celebration that blew up tremendously, attracting vintners worldwide.

“As we sit today, it’s not new. Twenty years is really nothing in terms of wine history,” Alban explained. “But what happened over the last 20 years (in the United States) was more significant than what happened in generations preceding it.”

Alban credited our local wineries that focused on Rhone varieties, which earned them worldwide acclaim: “A big part of the magic of Hospice is its purity. The event has been very true to being a celebration of the wines as opposed to becoming commercialized or a marketing effort. As long as I’m still alive,” he chuckled, “I’ll be at this celebration every year.”