The sweetest memories never seem to fade. Instead, they deepen with intensity over time.

Annie Farrell can still smell the tangy sea air that invigorated early morning fishing outings with her family. Casting a long line off Santa Cruz pier, Farrell wasn’t concerned with reeling in a big catch. Instead, the young girl dreamed of which treat she’d pick out at Marini’s Munchies, a little shop beloved by sweet tooths since 1915.

What tantalizing flavor would she savor this time? A colorful handful of saltwater taffy? Perhaps a few stick-to-your-teeth gummy chews? If the chocolatier was in the window that day, the answer would invariably be “chocolate, please!”

“The real treat was always watching the chocolatier through the window, my face pressed against the glass,” Farrell said. “I watched, mesmerized, as she dipped bonbons in an endless swirl of tempered chocolate, laying each one on a marble slab to set.”

Driving back home to Santa Clara on Highway 17, Farrell would later declare to her parents: “When I grow up, I want to be a candy maker.”

What hot-blooded kid wouldn’t jump at the chance to work with heavenly buttercream, almighty white sugar, and gooey caramel? No one could have known back then, but Farrell wasn’t just into sweets. She was in love.

Flash forward a few decades later, and that young lass is all grown up. Dressed in her smart black chef’s coat, Farrell is captain of her own ship, tackling everything from baking to packaging to marketing to delivering.

No craving is too large or small for Farrell to fill.

I interviewed the chef on a weekday morning in her cozy Santa Margarita kitchen and pastry bar, nestled against the Ancient Peaks Winery tasting room. Bright-eyed and bushy-tailed, Farrell got to a work chopping slab after slab of shimmering, golden toffee—a crucial ingredient for her famous flagship chocolate chip cookies (she makes about 10 dozen a week).

The task made a satisfying crunch-crunch-crunch sound, like boots padding through hard-packed snow.

“The toffee gives it a nice depth of flavor and a crunch, as well as some caramel notes, which work with the brown sugar flavor in the cookies,” Farrell said.

The story behind the cookies is equally alluring. After graduating from Cal Poly in 1998 with a degree in graphic communication, Farrell was just another working stiff in a cubicle. It was a great job, but it didn’t ignite a sense of passion.

“When I left, I wasn’t exactly sure what I wanted to do. My boyfriend, now my husband, said, ‘You love to cook, why not try it?’ Before throwing a bunch of money at culinary school, I thought I’d try to get a job in the industry,” Farrell said. “I had zero professional kitchen experience.”

It was a vulnerable place for Farrell to inhabit—attempting to dive into a world she had always admired but did not know intimately. When a Craigslist ad popped up for a gig at Black Cat Bistro in Cambria, she decided to take the risk. It was there, working on the line, that Farrell bolstered confidence in her culinary skills, which, until then, were usually reserved for her own kitchen. It was a freeing experience, a journey that led her to meet Meghan Hoetker, a coworker and fellow cook who would become a dear friend and business partner. 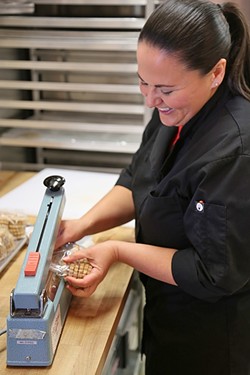 Both women married around the same time and had their first children a year a part. Like any good chef worth their salt, the friends took turns making chocolate chip cookies for each other, eventually improving on the recipe.

This friendship—and the toffee chocolate chip cookie at its center—would form the basis of what Just Baked SLO is today.

“At first, we felt like, ‘What business do we have to sell these cookies?’” Farrell said. “But enough people said that they loved them—and that we should sell them—that we decided to figure out what it would really take to do that.”

The women went into business together in 2010, and remain close confidants. Farrell took over the business fully in 2012, eventually providing goods to farmers markets, high-end weddings, and every kind of celebration in between.

Farrell’s cupcakes—baked in unique, fluted tins—have become a cult favorite in many local circles. I speak from experience when I say that the baker’s sauvignon blanc cupcake is a true work of art, inside and out. No wonder demand is high and soaring higher.

How does one have the energy to do what Farrell does, every day? Perhaps it’s impossible not to feel light hearted in the presence of so much dessert. Although Farrell has a lot to do and seemingly never enough hours in the day to do it, she loves coming into work every day. Her dad, Rick Fargo, helps with deliveries and a part-time assistant, McKenzie Richerson, comes in when there’s a particularly hefty workload. Farrell moved into the space about a year ago and has truly made it her own.

With the pastry bar stocked with grab-and-go items like scones, cookies, and bars, Santa Margarita has become a dash sweeter. In a hurry and want to pick up a jar of handcrafted blackberry jam, a few treats, and a cup of hot Spearhead coffee? Easy as pie.

And, speaking of pie, Farrell made more than a few over the holidays, including honey bourbon pecan (my favorite).

“It’s like grandma used to make,” Farrell said. She knows this sounds is a tad cliché, but it’s true. With so many purveyors serving up subpar ingredients, Farrell stands by quality with unwavering dedication.

Case in point: Her chocolate is exclusively sourced from Mama Ganache Artisan Chocolates in San Luis Obispo as well as Guittard Chocolate Company in San Francisco. The baker always uses light, fluffy Swiss meringue buttercream on her cakes, whether they be ruffled, smooth, or covered in delicate rosettes. With cake flavors like orange creamsicle, red wine toffee, and vanilla cardamom, and buttercreams that span from lavender and rosewater to peanut butter, you can get as “custom” as you dare.

“I do a root beer shot with root beer gelée with panna cotta on top, and it tastes like you’re eating a root beer float,” Farrell said. “I like to put Pop Rocks on top of it. Seeing people taste that kind of stuff is really cool to watch.”

In a corner of the kitchen, not far from a shelf displaying house-made cake mix and those adorable fluted cupcake tins, a string of letters hangs on the wall. They’re handwritten thank you notes from customers, brides and kids, students and parents.

“There’s a card up there that cracks me up: It’s got quotes from people as they are eating my cookies,” Farrell said. “That’s what means the most to me, because it takes a lot of work. Hearing from someone that you fulfilled or went above and beyond what they expected is amazing.”

Hayley Thomas wants to live inside one of Just Baked SLO’s cupcakes at hthomas@newtimesslo.com.