Caught up as she was in the magic of the different sounds of all the instruments in the orchestra, time and time again the violinist missed her own entrance, until one day, when she decided to be the person leading everyone in perfect harmony.

Laura Jackson has worked as a conductor for orchestras for more than 20 years, but over and over again she has had the experience of being the first female conductor to work in a community. 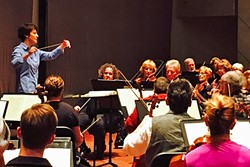 “Back in the early ’90s I was actually told when inquiring about a music director post that ‘this orchestra doesn’t do female conductors.’ That’s probably the most pointed thing that’s ever been said to me. Nobody would say that now,” Jackson said.

And soon Jackson, who currently serves as the music director and conductor for the Reno Philharmonic, can add another first to her list: She will be the first woman to conduct for the San Luis Obispo Symphony in its entire 62 year history when she takes the baton for the Classics in the Cohan Concert on Feb. 6.

While the symphony has only had four resident conductors, it has also had guest conductors, like Jackson, but never before has a woman been at the helm.

“There’s a longtime perception of the symphony conductor as a man,” Francie Levy, general manager for the symphony, said. “I’m excited for our audience to see Jackson conduct.”

While Jackson has helped to squash the perceived limitations of what women in music can do, she claims she’s had it easier than some.

“There have been a whole generation of women that came before me that really did the hard work,” Jackson said. “Three or four years ago it used to be just me and a few others that were doing this. And now there are women everywhere. I used to know everybody, and I know I don’t anymore. That’s hugely positive.”

While more and more women are taking over the conductor’s podium, Jackson said many of the top symphonies in the country in metropolitan areas like New York City, Chicago, and Boston have yet to see a female conductor take over as their resident conductor.

“That’s the sort of ceiling that remains to be broken,” Jackson said.

“I think traditions kind of die hard. And symphonic music is really steeped in tradition,” she continued. “We are still playing on very old violins and cellos. The conductors still walk out in black tuxes. We’re still playing Beethoven and music from the early 1800s.”

Soon San Luis Obispo could be numbered among the cities in the ladies’ club as the symphony is currently on the lookout for a new music director/conductor. Levy said that the organization is accepting applications until Feb. 15. After that, the pool of applicants will be narrowed down to five candidates who will each guest conduct for the symphony next season. If all goes well, a new director will start in May 2017.

During her time with the San Luis Obispo Symphony, Jackson will teach a workshop to the four youth symphony conductors, all of whom are girls. But Jackson said that likely won’t be the focus when she teaches.

“Women just want to engage in the art form and make great music and get past the distraction of gender,” she said.