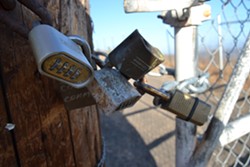 After months of testy statements, controversial construction, and strongly worded letters, the land-use conflict between exasperated hikers and a defiant landowner on Ontario Ridge is finally headed to a formal showdown.

According to a recently released California Coastal Commission agenda, the commission will consider issuing a formal cease and desist order—as well as a notice of violation—to Ontario Ridge landowner Rob McCarthy during its July 11 meeting in Ventura.

“We recognize how important this trail is to locals, and we are doing everything we can to secure the public’s right to the trail,” said Heather Johnston, the Coastal Commission’s local enforcement supervisor.

This skirmish dates back to November 2013, when McCarthy first started installing barbed wire fences and “no trespassing” signs on several parts of the property, blocking access to the Ontario Ridge trail, which overlooks Pirate’s Cove and Avila Beach.

After an outcry from local hikers, the Coastal Commission and San Luis Obispo County authorities eventually determined the fences and signs were illegal and infringed on an existing public access easement. The commission first ordered McCarthy to remove the fences on Feb. 7.

McCarthy subsequently removed some—but not all—of the fences and signs, and has constructed new barriers as recently as May. In response, some hikers have cut through fences and have bent back or removed signs that discourage public use of the trail.

According to Johnston, the proposed cease and desist order and notice of violation are both more formal mechanisms to force McCarthy to remove unpermitted development on his property and come into compliance with the state’s Coastal Act.

“If the commission approves the cease and desist order, there would be deadlines,” Johnston said. “Failure to comply would be problematic, draw consequences, and would have to be dealt with.”

According to Johnston, coastal commissioners will receive public comment on the matter, debate, and then vote on both actions.

The notice of violation, if approved, would serve as a “red flag” on the property that would identify Coastal Act violations to potential future owners of McCarthy’s land, she added.

When reached for comment, McCarthy said he is sticking with his conviction that his fences and signs are perfectly legal.

“I am convinced that I did nothing wrong when I built fences and put up ‘No Trespassing’ signs on my property,” McCarthy wrote in an email to New Times. “If the Coastal Commission follows the law then they decide that I haven’t violated anything.

“If the Coastal Commission does decide that I have violated something, then I am sure that sooner or later we will end up in court,” he added, echoing previous threats to sue in the event of formal Coastal Commission action against him.

Local attorney, activist, and hiker Tarren Collins—who has led public efforts to protect the trail—said she is thankful for the commission’s intervention against McCarthy’s fences and signs, for which she said there is “absolutely no legal justification.”

“A couple of images come to mind—an ostrich with its head in the sand, or a 2-year-old with his fingers in his ears screaming ‘lalalalala,’” Collins said. “I urge people to send letters to the Coastal Commission in support of its efforts to force McCarthy to abide by the law.”

Information about the Ontario Ridge Coastal Commission hearing can be found at coastal.ca.gov/mtgcurr.html, and letters to the commission can be sent to Heather.Johnston@coastal.ca.gov.