Calendars are hard! Spider-Man is cool!

I apparently can’t read a calendar. Last week I wrote about two Downtown Brew events and managed to get the dates wrong on both. Clearly I don’t have superpowers, especially ones bestowed upon me by a radioactive, mutant, genetically modified super spider, unlike, say, Reeve Carney. Read on.

On Saturday, Jan. 16, Carney returns to the club (7:30 p.m.; all ages; $6 presale or $8 at the door). The rock, blues, and French pop act is fronted by siblings Reeve (voice and guitar) and Zane (guitar) Carney, a couple 20-somethings who’ve taken the LA scene by storm. Hear hints of Jeff Buckley, The White Stripes, Led Zeppelin, John Lennon, and Pink Floyd in their sound.

On an interesting side note, Reeve got the lead role as Spider-Man in the Broadway play opening this spring on New York’s Great White Way. The rest of the band was hired to play in the orchestra.

Carney also has a new album coming out this March on Interscope Records. They’re going to be huge, people! Entertainment Weekly put them on their “Top 10 to Watch in 2010” list. Get to the Brew and see them before they’re bigger than Elvis! Central Currency and Killa Gorilla will open the show. 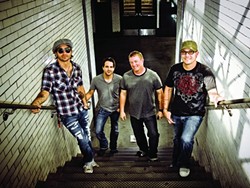 Formed 13 years ago in Yukon, Oklahoma, CCR is a gifted alt-country quartet of the red dirt variety—think acts such as Stoney LaRue, Micky & The Motorcars, Reckless Kelly, Wade Bowen, No Justice, and Brandon Rhyder.

While CCR has been around for a while, the Randy Rogers Band is just beginning their assent: They have an American Country Music nomination; they’ve appeared on both Letterman and Leno; Rolling Stone named their show one of the “Must See Tours of Summer” a couple months ago; the band’s most recent last CD debuted at #3 on Billboard’s Country Albums chart and was chosen by Playboy magazine as the Best Country Album of the year. 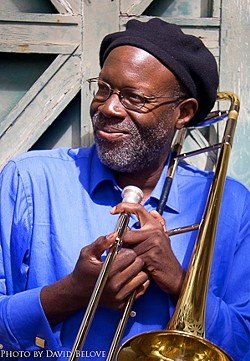 Jazz at the Art Center!

The SLO Art Center and the SLO Jazz Federation have teamed up with a new endeavor, the “Marilyn Greenberg Jazz Concert Series,” starting with The Wayne Wallace Latin Jazz Quintet this Friday, Jan.15, at 8 p.m. in the Art Center.

The plan is to find on-the-rise jazz acts and bring them in for intimate all ages shows, and Wallace (trombone) fits the bill perfectly. The quintet recently had a CD release concert for Bien Bien at Yoshi’s in San Francisco earlier this month and appeared at The Monterey Jazz Festival last month. Bien Bien debuted at #1 on The Media Guide Jazz Week World Chart and # 10 on The Media Guide Jazz Week College Chart.

Forrest Dylan Bryant of The Jazz Observer wrote, “Wallace’s quintet is like an elite commando unit: lean, mean, and packing some serious heat.”

This new monthly series is dedicated to Ms. Marilyn Greenberg, former treasurer of the Jazz Fed whose passion and legacy for promoting jazz on the Central Coast will carry on through these concerts.

Presale tickets are available at Boo Boo Records and The Art Center: $15 for students; $20 for Jazz Fed and Art Center members; and $22 for all others. Remaining tickets will be sold for $25 at the door.  For more info, call 543-8562.

Get ready to Share the Dream during the Martin Luther King Jr. holiday concert and festival at SLO’s Laguna Middle School’s multi-purpose room this Saturday, Jan. 16 from 11 a.m. to 5 p.m.

Also expect speakers, an educational video featuring speeches by Dr. King, and a presentation of the United Nations Universal Declaration of Human Rights. The top three winners of Sharing the Dream’s 1st annual Essay and Art Contest will be recognized. Look for these student essays in this week’s New Times.

Lunch will be provided at $5 a plate by Bon Temps Creole Café. Admission to the daylong event is only $10. 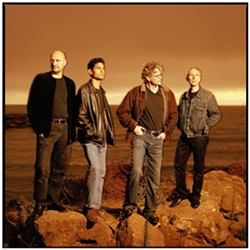 The bizarrely awesome and totally indescribable Kronos Quartet will do that thing it’s been doing for more than 30 years now—namely redefining classic music by throwing out the rules and drawing on influences from around the world—on Wednesday, Jan. 20 at 7 p.m. in the PAC’s Cohan Center (tickets are $20 to $44; call 756-2787).

Featuring David Harrington (violin), John Sherba (violin), Hank Dutt (viola), and Jeffrey Zeigler (cello), this is an ensemble whose approach to music is best described as fearless, inventive, and insanity-inducing!

“I’ve always wanted a string quartet to be vital, and energetic, and alive, and cool, and not afraid to be absolutely beautiful and ugly if it has to be,” explained Harrington. “But it has to be expressive of life. To tell the story with grace and humor and depth.” 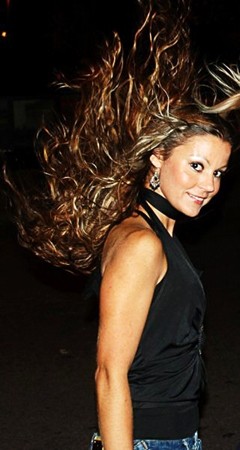 A band that plays covers of Southern and classic rock, Motown, country, and blues, fronted by a cute girl, and performing at a beachside Bar? Holy crap, that sounds pretty awesome! If you think so too, check out The Sandy Cyfers Band at Mr. Rick’s in Avila Beach this Friday, Jan. 15 from 9 p.m. to 1 a.m. Sandy plays fiddle, and the band delivers tight vocal harmonies.

Margie Nelson’s upcoming CD, Hungry Girl, is due for release in mid-2010 and features Grammy-nominated Christian Jacob and Kevin Axt of the Tierney Sutton Band and many other stellar musicians. If you can’t wait that long to hear Nelson (and you can’t!), head to the Clubhouse this Saturday, Jan. 16 at 7 p.m. for The Margie Nelson Jazz Group to hear jazz standards and dance-friendly swinging Sinatra and Nat King Cole tunes (vocal and instrumental), plus Latin and Brazilian jazz, romantic ballads, and contemporary pop and blues thrown in.

Lil Rev—an award-winning multi-instrumentalist, songwriter, and music-historian who teaches and tours nationally—will be joined by local music star Brynn Albanese (Café Musique) for a show this Saturday, Jan. 16 at 8 p.m. in Steynberg Gallery Tea & Coffee House. If you like ukulele, folk, old time, harmonica, Jewish music, & culture, American labor history, and respect for your elders, this is the show for you. Tickets are $10 at the door.

Is that Mr. T? The black guy with the orange Mohawk? No, that’s not Mr. T. He doesn’t look Irish either, yet he is part of the California Celts, who—in their kilted glory—will play two shows at Mr. Rick’s this week: Saturday, Jan. 16 at 9 p.m., and Sunday, Jan. 17 at 2 p.m. The Cali Celts draw from the worldwide catalog of Celtic music, played with bagpipes, brass, and drums. Expect Scottish jigs, Irish standards, Celtic originals, and Celtic ska! I pity the fool that doesn’t like this band!

Craig Melia—firefighter, surfer, and singer-songwriter—will bring his band Gilt Lily to Sweet Springs Saloon this Saturday, Jan. 16 and then to Frog and Peach on Sunday, Jan. 17. “We play original country blues featuring the songwriting of myself and Amy Pratt,” said Melia. “Amy is from New York and moved out here recently. After she sang on my CD Fantom, we formed a band and have packed a few venues already. Also in the band is Mike Hickey on drums, Kurt Lindgren on bass, Shane Stoneman on guitar, and Bubba Ramey on saxophone.”

This Sunday, Jan. 17, pianist-vocalist John Proulx and his quartet play the next Famous Jazz Artist Series concert at the Hamlet in Cambria. Proulx, who just finished a long engagement at the prestigious Feinstein’s Club in Manhattan, will be joined by Ron Stout (trumpet), Chuck Berghofer (bass), and Joe LaBarbara (drums), playing selections from their recent hit recording Remembering Chet Baker. Series co-producers Charlie and Sandi Shoemake (vibraphone and vocals) will also be on hand for the 4 p.m. set ($15) and 7:15 set ($12). See both for $20. Call 927-0567 for reservations.

Glen Starkey knows it’s impossible to both love and be wise. Offer him your favorite mutual exclusive at gstarkey@newtimesslo.com.

Using the same intricate looping ability he showcased opening up for the Mountain Goats last year, Owen Pallett takes the blueprint Andrew Bird sketched—baroque pop built upon violin and multi-instrumental virtuosity—and builds an operatic vision. And like the stagecrafted drama, it may be best to take in as a beautiful artistic endeavor than try to make sense of it. Heartland can seem a bit overwrought, its polyphonic intricacies lost in lyrical obtuseness. But just as you’re about to write it off, a song like “Lewis Takes Action” steals the scene with Beach Boy harmonies built around a Ronette’s backbeat, and your attention is re-centered. “Red Sun No. 5” recalls the sonic adventurousness of Bjork’s fusion of majestic string and horn sections with insistent electronic beats. In all, Heartland invites a listen for its soaring chorus and euphonic melodies. It’s a grand experiment that finds success in acts, though not in whole.

Shrugging off any implication of a sophomore slump, Vampire Weekend repeats the buoyant brilliance of its debut with a further dip into international influence. Opening with the vibrant “Horchata,” VW displaces some of its focus on Africa with a view of our southern neighbors. The marimba’s friendly bounce and the barrage of drums feels like a Brazilian festival hooked into a calypso line. “White Sky” revives the familiar Afro-pop guitar with jaunty synth lines popping like bubbles beneath it. You can’t help but think of Paul Simon’s South-African Graceland album and his investigation of Brazilian percussion on The Rhythm Of The Saints. But unlike Simon, Vampire Weekend has stuck both landings; instantly likable from the first track, Contra plays like a sunny rush of exuberance. “Cousins” is a spirited frenzy of energy, with drums working overtime and the guitar blazing through speedy runs. “Taxi Cab” flirts with European sentimentality with cello, piano, and harpsichord building a small symphony for a music box ballerina. Improving on their debut, Vampire Weekend has started your decade on the right note. ∆