The 'Colors of Paso' exhibit redefines what a landscape can be

Erin Hanson’s landscapes have a special magic about them. You don’t just look at her oil paintings, you experience them, feeling the crisp chill of a North County morning or the arid heat of a late-summer afternoon. Her work reverberates with life and love and energy; in its deliriously bright wildflowers and abstract sunsets, we glimpse a consummate love of the natural world. For a moment, we see what Hanson sees.

“Colors of Paso,” a current exhibit at Paso Robles’ Studios on the Park, depicts Hanson’s visions of the hills, lakes, and wildflowers of the North County town. You could call it plein air, but that wouldn’t be quite right. The pieces aren’t done on location, and their composition is often less a direct representation than an amalgam of images, colors, and textures compiled from photographs and from memory.

Hanson lives in Burbank, but frequently takes road trips to Utah, Arizona, Nevada, and Northern California, capturing the dramatic skies, purple shadows, ancient rock formations, and often the striking emptiness of these places, first with a camera and later with a brush. The desert, with its lonely beauty, has long provided inspiration.

“I can’t believe how big the skies are,” Hanson said, sitting outdoors in a downtown Paso Robles café. “The clouds seem to just pop out at you. It’s hard to capture that in paint, so if I can even come close to that, I think I’ve done my job.”

Hanson discovered Paso in February of last year. The artist had been on her way to Sonoma County, she explained, but was so taken with the North County that she never actually made it to her intended destination, choosing instead to live out of her van for several days, waking at dawn to photograph Paso Robles’ golden, rounded hills and majestic oaks. The artist amassed roughly 10,000 photos of the region, she estimates, which provided her with ample material for the entirely new body of work that is “Colors of Paso.” 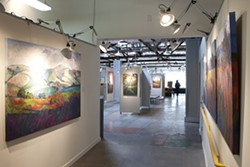 The pieces are impressions, fleeting pictures stored within the mind’s eye. Look at a beautiful vista and shut your eyes tight, and the image left dancing behind your eyelids is what Hanson seeks to recreate. An impression is, of course, a slippery thing. The colors and details of the image may shift unreliably in one’s memory. The lines of a fence may warp the colors behind it intriguingly. Other memories may even transpose themselves onto the image in one’s mind, clinging together in the brain like transparent slides. But the essence of the scene, how it made you feel, is locked in tight. Though the strokes may be broad, their impact is precise.

Several painterly techniques contribute to this impact. One is Hanson’s method of underpainting; she often paints the entire canvas a brilliant red before even starting the work, letting the bold color unexpectedly shine through. Another is Hanson’s way of depicting an object by painting in the negative space around it, allowing a spiny branch or swelling storm cloud to come into existence as if by sheer default—a composition in reverse. Hanson’s wet-on-wet painting style gives the pieces a near sculptural texture, allowing the viewer’s eye to trace the swift patterns made by her brush. Like many painters, Hanson has seen her style loosen considerably over the years, flirting with abstraction in the fiery, sun-kissed grasses of Colors at Paso and the perfect messiness of the sky in Break of Light. The result of all these techniques is a fresh, unique approach Hanson has termed “open impressionism.”

Through her outdoorsy artistic excursions, Hanson has become quite the adventurer. A passion for rock climbing, for example, was a natural offshoot of the artist’s ongoing quest to capture the most striking views. Of course, Hanson admits, the isolation that accompanies many of her trips can have strange effects on the mind.

“I’m not talking to people for weeks on end. Sometimes I don’t have cell phone service. I don’t even call my boyfriend. I definitely get into these weird moods,” she said.

Hanson described an oddly terrifying moment she experienced while sleeping in her van in Utah’s Arches National Park.

“It was the middle of the night,” she recalled, “and I was surrounded by these giant red rocks—these rounded, goblin-looking rocks. I woke up for some reason, and I go out, and I’m surrounded by these looming goblin things. I freak out and I ride down the mountain.”

She laughed, acknowledging how absurd one’s nighttime fears appear under the noonday sun.

“I get disoriented because it’s pitch black,” she continued, “and I’m the only one in the park because I’m illegally parking in there. I’m literally the only person within, like, 20 miles. And everywhere I drive, there’s these like looming rocks everywhere. I’m telling you, rocks are creepy sometimes. There’s so much … just mass in them. It’s overwhelming how big they are sometimes, and you’re walking all tiny among them. I see why the Indians considered these places sacred. I totally get it.”

(Hanson, 31, is the opposite of any landscape painter I know, I began to realize. She’s young and tanned, climbs rocks, smokes American Spirits, and she breaks the law! Damn.)

It wasn’t the only time the painter would be caught between a goblin-shaped rock and a hard place. On another painting excursion, she recalled, “I got caught up in this lightning storm on the top of this mountain, and the lightning was hitting all these trees around me. There were all these blackened, shriveled trees where the lightning had hit and burnt it to a crisp.”

Now there’s a landscape painter who lives on the edge.