Open your ears; open your mind

Instead of listening to the roar of car engines driving in circles, the bleachers of the Santa Maria Speedway (which is actually in Nipomo, about 20 minutes south of SLO) will be filled with the sweet sounds of socially conscious hip-hop by the likes of Rakim Allah, Immortal Technique, Crown City Rockers, Da Circle, Diabolic, Public Defendaz, Venomous Voices, 40 oz. Freaks, and Natural Movement this Sunday, August 10 (Gates open at 1 p.m.; tickets cost $23 at Central Coast Vallitix outlets or online at summerskool.net.) 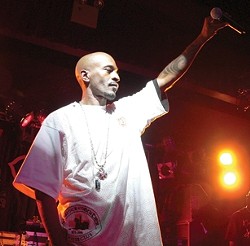 Billed as the Summer Skool Fest, the daylong celebration of art, music, and culture will feature the aforementioned acts, as well as local vendors, food and beverage concessions, and educational activists’ booths.

Born William Michael Griffin, Jr. in Long Island, New York, Rakim is the nephew of R&B legend Ruth Brown and, as you probably know, was one half of the duo Eric B & Rakim, seminal East Coast hip- hop pioneers. They made big news in the mid-’80s when their single “I Know You Got Soul” sparked a debate about the use of unauthorized sampled material after James Brown sued them for using a fragment of his music. Their album Paid in Full was named the greatest hip-hop album of all time by MTV, but after four albums the duo split and Rakim started his solo career.

Immortal Technique is a hot up-and-comer, best known for his political lyrics that focus on poverty, racism, and religion. Born Felipe Coronel, he’s of Afro-Peruvian descent and was raised in Harlem, which is why a lot of his songs explore crime and the depressing conditions of New York’s housing projects.

Crown City Rockers are a five-piece hip-hop act out of Oakland, that plays live instruments and cites A Tribe Called Quest, The Roots, KRS-One, and De La Soul as influences.

Organized by Numbskull Productions and Downtown Brew, this show is going to be off the hook!

I’m occasionally guilty of hyperbole when it comes to pumping up the CD releases of local bands, so I feel a little like the boy who cried wolf when I tell you Joe Koenig’s new CD Somethin’ Concrete is awesome beyond compare—seriously!

Koenig, who calls his music “Texas Soul,” was born Leslie Joe Koenig II in Houston, Texas, but later moved to Concrete, Texas, hence the title of this autobiographical CD, which seems to tell the story of Koenig’s life and loves.

Opening with the sweet, soulful sounds of “Woman,” Koenig sings with a tenderness that’s hard to describe, and when a trio of gospel-inspired female backup singers chime in, it just about stops your heart.

Other tracks are stripped down to nothing by Koenig’s voice and guitar, such as “Long Time Coming,” which sounds like it could be a lost track from some Ben Harper album: “Friend of a friend, is where it began/ meeting by chance, haphazard romance/ Her smile was like sweet wine, he’d get drunk on her laugh/ the hangover was different this time, it was an image he had/ in the back of his mind, that slipped to his heart/ never felt sicker, than when they would part.”

These are songs of longing, of joy, of loss. The only bad thing about this CD is it’s too damn short. Its eight tracks leave you yearning for more.

See Joe Koenig during an album release party this Saturday, Aug. 9, at Downtown Brew. The 7 p.m. show costs $8 in advance (at Boo Boo Records and the venue) or $10 at the door, and features Matt Van Winkle, Doug Groshart, and Loren Radis opening.

Celtic band Molly’s Revenge, with special guest performer Moira Smiley, plays Thursday, Aug. 7, at 8 p.m. at Painted Sky Studios in Cambria. From highland pipes and fiddle tunes, ripping Irish jigs and reels, to sweet folk songs on bouzouki and mandolin, this is a group with a ton of range and a level of musicianship that will blow your kilt off. For their most recent CD, The Western Shore, the band took to the Internet, raising $8,000 from fans to finance the new record while doing an end-run around the traditional record label route. Tickets—if there are any left—cost $18 at Boo Boo’s, or call 927-8330.

Paso Robles is kicking up its heels this Friday, Aug. 8, when country swingers the Monte Mills Band will light up the City Park Bandstand from 5:30 to 7:30 p.m. Get ready to two-step your way into the weekend.

This Friday, Aug. 8 at SLO’s United Methodist Church, the San Luis Obispo Wind Orchestra plays its last concert before leaving for the Jeju International Wind Ensemble Festival in South Korea, an internationally recognized weeklong festival for wind orchestras and ensembles. The 8 p.m. concert, under the batons of Conductor Bill Johnson and Guest Conductor Chungsam Doh, will feature the music the ensemble will play at the festival. The concert is free, but a $10 donation is suggested to help get the ensemble to South Korea.

The Red Barn Community Music Series presents Banshee in the Kitchen this Saturday, Aug. 9, at the Red Barn in the South Bay Community Park in Los Osos. The Celtic group “takes traditional Celtic tunes, finds the sweet spot between old and new, stirring it all up with trademark playfulness and musicality they term ‘banshee-fying,’” according to press materials. The show costs $10 and starts at 7 p.m., but there’s a 6 p.m. potluck as well.

They’re loud, proud, and back after a five-year hiatus. I’m talking about Bedpan, SLO’s own little troublemakers, who play Saturday, Aug. 9, at 8 p.m. in O’Reilly’s Bar and Grill in Grover Beach with S.M.D. (Serosis My Death), the Wimpy Dicks, and Death Valley Meth Lab. At only $5 for this four-band punk rock extravaganza, you can’t afford not to go.

If you like riotous songs about war, poverty, ignorance, bigotry, neo-conservatism, homophobia, greed, lust, and fear—and come on, who doesn’t?—look no further than satirist Roy Zimmerman, who plays at 8:30 p.m. on Saturday, Aug. 9, at The Clubhouse. Tickets cost $15 at the door, or get ‘em online at brownpapertickets.com.

On Sunday, Aug. 10, the 3rd Annual Village Summer Concert Series presents Celtic and folk music for your listening pleasure, when singer-songwriter Steve Key opens the show for Sligo Rags at the Rotary Bandstand on the Village Green in the Historic Village of Arroyo Grande at 1 p.m. ÜAward-winning

songwriter Steve Key wrote “Record Time (33, 45, 78),” recorded by country star Kathy Mattea in 1992; and dozens of other folk, country, blues, and pop artists have recorded and performed Key’s songs. Sligo Rags is a two-time winner of the Orange County Music Award for Best Folk Band. As usual, this concert is free!Ü

California folk rocker Jon Foreman works in the same vein as Damien Rice, Jack Johnson, and Elliott Smith, but perhaps with a slightly darker tone. The frontman to the multi-platinum alternative rock act Switchfoot gets pretty sensitive in his solo work, which will be on display Monday, Aug. 11, at Downtown Brew. “Ten years ago, when I actually started making money with my songs, I was nervous that the magic would disappear,” said Foreman, “that somehow, the passion, the joy, and the high that I got from music would evaporate with every step I took towards the modern music industry. I’m so thankful that that hasn’t happened. I’m so thankful that these songs still mean so much to me. In fact, I am perhaps more drawn to music than ever.” Timy Curren opens the 7 p.m., $10, all-ages show.

International performing and recording artist Rod MacDonald, known for his delightful political and social satire, plays The Clubhouse this Tuesday, Aug. 12, at 7:45 p.m. With a career spanning 30 years, MacDonald is a vital force in the folk music community. All Music Guide calls him “one of the most politically and socially aware lyricists of our times.”

Ah, the spectacle of a Phenomenauts show! The costumes, the sights, the sounds! Downtown Brew and Numbskull present The Phenomenauts with openers Vic from The Slackers and Kepi from the Groovie Ghoulies on Wednesday, Aug. 13, for a 7 p.m., all-ages show that costs $10 in advance (at Boo Boo Records or the venue) or $12 at the door. The Bay Area-based Phenomenauts combine elements of rock’n’roll, pop, punk, new wave, surf rock, and rockabilly with a futuristic science fiction theme, dubbing their style “Rocket Roll.” You can almost smell the nerdiness!

Coming out of the Brooklyn boroughs (already home to the revivalist soul sounds of Daptone Records’s Sharon Jones & The Budos Band), up-and-coming record label Truth & Soul has slowly birthed marvelous resurrections of funk, Latin soul and Afro-funk that, until now, usually resided on white-jacketed 45s. As their second full-length release, they’ve nailed the sound of 1970s New York, where black and Latin styles merged to create a free-spirited exchange of salsa, funk, and fusion. With a name that salutes the salsa heritage of Eddie Palmieri’s super group Harlem River Drive, Bronx River Parkway have issued a spectacular debut, full of tight horn arrangements that seem to slip and slide within each other, and a rhythm section that suggest the flair and heartbeat of Cuba’s finest. Teaming up with legendary Puerto Rican salsa musicians in San Juan, San Sebastian 152 is as top notch as an undiscovered Buena Vista Social Club recording, as impressive of a release you’ll find all year. Highly recommended.

For young boys who learned to moonwalk and were mesmerized by the breakdancing acrobatics in movies like Beat Street, Breakin’, and even Flashdance, you couldn’t help but also be entranced by the distinctively, funky breaks the DJ spun flawlessly together that seemed to propel the dancers into a frenzy. Deejay MK Larada was a similar youth (just witness his 1985 cover shot), who now has tailored his own mix for keeping the B-boys popping and locking until the break of dawn. Melding familiar classics like Queen’s “Another One Bites The Dust” and Herbie Hancock’s “Rockit” with known jams like Shannon’s “Let The Music Play” makes this an easy floor-filler. But the cleverness shines through when brief bars of the Muppet Show intro coalesce into Rob Base’s “It Takes Two” or when Lamar, the sole black outcast from Revenge Of The Nerds, lets loose his party rhyme, but now backed with a muscular booming beat. You’ll already be dancing, but now you’ll just be smiling much more.

Glen Starkey follows his dreams … except for that one where he’s naked at work. Tell him your dreams at gstarkey@newtimesslo.com.