Are there hidden costs under the surface of Nacimiento water?

Anxiously wringing his hands as if he might squeeze out precious water onto the podium, Pascual Padilla addressed the standing-

# room-only crowd at a recent Paso Robles City Council meeting: "People on fixed incomes should not be held responsible for new growth. Why should us little guys have to pay so much for Nacimiento water?"

The retired Diablo Canyon ironworker and long-time Paso Robles resident joined dozens of other gray-haired people on fixed incomes, all begging the City Council on July 17 not to adopt a new monthly fee to raise funds for the city's share of the Nacimiento Water Project. A notice of Paso Robles' plans to increase each water bill by $60 a month was hidden under other papers in June's water bill, with instructions about how to officially protest even harder to find, speakers said.

Engineers for the water-moving project are voicing their confidence that the pipeline will be built, now that the bid for constructing the first 22-mile segment came in under cost estimates on July 19 after bids for the water intake structure a few days earlier came in around 60 percent over the estimate. But rising to the surface are questions about whether there are any hidden costs lying under the project's estimated $190 million bill.

It's decision time for the five communities in line to receive water from Lake Nacimiento: Paso Robles, Templeton, Atascadero, San Luis Obispo, and the southern part of Cayucos. A 30-day "opt out" period is now in effect, giving decision-makers a chance to change their minds about joining the Nacimiento Water Project if they feel the costs are too high.

So far, according to project manager John Hollenbeck, the communities' support for the Nacimiento pipeline is strong.

It's a classic California story "no place moves water around like California," as Hollenbeck pointed out but this time, instead of fighting over the precious liquid resource, decision-makers are cooperating. The result: plans for a 45-mile pipeline and three pumping stations to carry more than 16,000 acre-feet of water a year from Lake Nacimiento west of Paso Robles, roughly along the Salinas River corridor, and over the Cuesta Grade to San Luis Obispo.

The resulting water bill may price Padilla and other Paso Robles citizens out of their homes, the City Council was told, unless residents can find a way to pay the same $60 monthly fee increase required of a 100-room hotel or a water park. But all of San Luis Obispo County will have to deal with the impacts of new growth that's likely to gush out along the pipeline route. 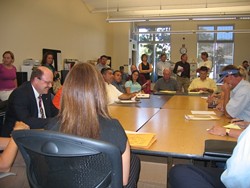 # "The Nacimiento Water Project, by supplying supplemental water, would remove an obstacle to growth and lead to increased growth in SLO County communities and cities," the environmental impact report for the project states. "It is recognized that roads, schools, air quality, water, sewer systems, and other resources in SLO County have become overtaxed. These resources could be impacted by growth resulting from the [Nacimiento] project."

The communities along the pipeline route have signed up for differing amounts of water: Paso Robles for 4,000 acre-feet a year Templeton for 250 Atascadero for 2,000 San Luis Obispo for 3,380 and Cayucos (through a water exchange agreement with SLO, not a new pipeline) for 25.

Each community uses a different calculation for how many homes an acre-foot of water can supply, depending on water conservation practices in each place. In Cayucos, for example, one acre-foot supplies 4.35 homes, whereas in Atascadero with its large lots and expansive lawns it's 1.5 homes.

But these figures don't tell the whole story. Each community is also entitled to a little-noticed "reserved capacity," an extra amount of water totaling more than 6,000 acre-feet each year. On top of the already-contracted amounts, the pipeline has been designed to deliver an extra 2,542 acre-feet a year to Paso Robles, 159 to Templeton, 1,271 to Atascadero, 2,132 to San Luis Obispo, and 80 to Cayucos.

There's already talk of selling the excess water to private water companies outside of the existing service area boundaries or in agricultural zones. As the environmental impact report points out, these private water companies would then be able to provide a source of water "in applying for general plan amendments to change the land use designations to accommodate projects with residential or other uses."

Private water companies in the Edna Valley, the SLO Airport area, and Cayucos have all requested allocations, the report states. Developers of the Chandler Ranch and the Olsen-Beechwood project in Paso Robles are also each hoping to buy 1,000 acre-feet a year, according to City Manager Jim App.

But private companies aren't the only other groups potentially interested in Nacimiento water. Deliveries of State Water may be reduced after recent court decisions, leading to "renewed interest in Nacimiento deliveries from potential participants," according to notes from an April meeting of the Nacimiento Water Commission.

"It could be several decades before all the reserved capacity is fully utilized," Hollenbeck explained. "The buy-in fee for new participants will reimburse the original participants for their payments. They bellied up to the bar."

That reimbursement could be used to reduce future water rates for Nacimiento water, according to Atascadero Mutual Water District General Manager John Neil, who added, "You probably won't see a check in the mail."

"In all likelihood, the initial participants will take the excess capacity in the future. I hope our conservation efforts reduce demand, so 2,000 acre-feet will serve us far into the future," he said, adding that a water rate increase will be decided upon for Atascadero water customers in the next few months.

For Templeton, Nacimiento water "absolutely will have growth-inducing impacts," according to the recently retired general manager for the Templeton Community Services District, Bill Van Orden, who's now serving as the new general manager's assistant for the Nacimiento project. On top of the 250 acre-feet Templeton has signed up for to supply new development, the town's 159 acre-feet reserve "could get sucked up quickly," Van Orden noted.

In Cayucos, the new water source will eliminate the community's official "water supply emergency," which has restricted development.

"The Nacimiento Water Project will let us supply water to the rest of the vacant parcels. People can build now. Is it growth-inducing? We see it as serving buildout," explained Will Clemens, county Public Works Department administrator.

Unlike Paso Robles, the current water customers in Cayucos won't be asked to pay the lion's share of costs of obtaining Nacimiento water, Clemens said. Instead, new water connection fees are expected to foot the bill. Those fees have been increased from $2,230 to $8,100 per "dwelling unit equivalent," he said.

Templeton also expects to use new connection fees to cover most of the costs of Nacimiento water, Van Orden said. Those fees have increased to $13,453.

Atascadero has raised its water connection fees to $12,500.

In San Luis Obispo, water rates are going up for all water users to help cover Nacimiento's costs but rather than a set fee, the new rate is based on a percentage of existing water use.

Back at the recent Paso Robles City Council meeting, the parade of speakers opposed to the new $60-a-month charge continued to plead with councilmembers to support a proportional fee based on water use, to encourage conservation.

Paso Robles has doubled its groundwater use in just one year, figures released for April 2007 show.

"This fee penalizes small customers in favor of large users," said David Hicks, representing the Boy Scouts. "It doesn't really emphasize the true cost and value of water to this community. As water becomes more valuable, customers want more choices, on how much to use, and what to pay."

"Why should we choose to buy this expensive water simply to accommodate accelerated growth?" one citizen asked, while another pointed out the high proportion of retired or disabled people in Paso Robles who would find it difficult to pay the new charge.

"We have two limited resources: water, and the income of property owners in Paso Robles," another said, adding, "We've been sold down the river. We're being priced out of our community."

His words echoed the earlier comments of long-time resident Padilla: "You see a lot of gray hairs here. We're the people who made this town. Don't take it away by these rates."

For project proponents, though, the often-mispronounced Nacimiento project (which one cynic suggested rhymes with "now-see-me-spend-oh") signifies a birth of sorts Nacimiento means "birth" in Spanish.

"It's a rebirth in terms of supplying water of high quality with reasonable assurance that it will be there in the future. And we won't be in competition with agriculture for the water. Only so many straws can be put into the glass," said Templeton's Van Orden.

The Nacimiento Water Project has also been examined for its potential effect on boating recreation at Lake Nacimiento. With the lake level currently at 40 percent of its capacity, there's been some concern that launch ramps could be left high and dry once the pipeline is built. But SLO County's water entitlement is only five percent of the lake's total capacity of 377,900 acre-feet and is unlikely to impact recreation, a county report states.

Monterey County's decisions are much more important to lake levels that county routinely drains around 200,000 acre-feet a year from the lake to recharge groundwater levels downstream. Plans are underway to let out even more water this year, to lower lake levels far enough to rebuild the dam spillway. SLO County hopes to take advantage of the low levels to build the water supply intake structure for the Nacimiento pipeline, according to project manager Hollenbeck.

"We have a very reliable water source. We won't see that," Hollenbeck said, pointing to a recent New Times cartoon by Russell Hodin depicting two parched skulls waiting for a few drops from the Nacimiento pipeline. The drawing is pinned to Hollenbeck's office wall in the county courthouse.

As for the financing arrangements, Hollenbeck said there's a "philosophical difference in each place," which he termed "an interesting fact."

"Possibly some people might be burdened, but most communities have a provision for financial hardship. I've done everything I can to get the price pulled as close to budget as possible," he said.

Hollenbeck breathed an audible sigh of relief when bids for the first stage of pipeline construction were opened July 19, and most came in under the estimated price tag. A county official used a letter-opener from a home construction company sporting the motto, "Improve your quality of life" to open the sealed bids, while a sign on the wall proclaimed, "Man creates problems, government and bureaucrats magnify them 100 times."

One problem still to be resolved by the county: the required right-of-way easements over private property along the pipeline route. Eighteen property owners are facing eminent domain procedures referred to in meeting notes for the Nacimiento Water Commission as "the process of court-ordered possession" even as negotiations continue, Hollenbeck said.

Clearing the land along the pipeline route for the underground pipe will result in the destruction of many mature oak trees, North County Watch representative Sue Luft pointed out. Replacing those historic trees with tiny oak seedlings is not adequate mitigation, she said, adding, "A lot of people, when they see the bulldozers, will say, 'Oh, my god!' Wineries will be upset when they see the whole look of the El Pomar area of Templeton ruined."

Whatever the costs of the Nacimiento Water Project, though, Luft concluded, "It's our last source of water. That water needs to go for the highest and best use workforce housing, not golf courses and sprawl. We shouldn't squander it.

"We have to use that water properly, knowing it's a pretty precious commodity."