Opera San Luis Obispo presents the Tony Award-winning Rodgers and Hammerstein Broadway musical, Carousel, at the Harold Miossi Hall of the Performing Arts Center of San Luis Obispo on Saturday and Sunday, May 7 and 8 (2 p.m.; ages 10 and older; $35 to $85 tickets at pacslo.org). The musical is divided into two acts with a 20-minute intermission and a total runtime of two and a half hours.

If you've seen Carousel—Rodgers and Hammerstein's Tony Award-winning 1945 Broadway musical about two young couples falling in love in 1873 Maine, which was made into a somewhat toned-down 1956 film—you know what you're in for: a song-filled story about tragedy and triumph, rejection and redemption.

It was Rodgers and Hammerstein's second collaboration—after Oklahoma!—so they had everything to lose and everything to prove to top that achievement. What they created was another revolution in musical theater that Time Magazine voted best musical of the 20th century. You can see OperaSLO's production this weekend, May 7 and 8, at the SLO Performing Arts Center.

Billy Bigelow is a rough-around-the-edges carousel barker who falls for millworker Julie Jordan. Meanwhile, Julie's millworker friend, Carrie Pipperidge, falls for ambitious fisherman Enoch Snow. The two couples have very different futures in store for themselves, and along the way, audiences will be treated to some very familiar music.

"Carousel's successful longevity is attributed to the great fame behind the music," OperaSLO Artistic and General Director Dr. Brian Asher Alhadeff said. "There are at least three songs that have ascended beyond the boundaries of the musical to everyday familiarity: 'If I Loved You,' 'June Is Bustin' Out All Over,' and 'You'll Never Walk Alone.' 'If I Loved You' alone has been covered by famous pop artists including Frank Sinatra, Perry Como, and Mario Lanza. 'You'll Never Walk Alone' has been performed by Elvis Presley, Judy Garland, Barbra Streisand, and the Righteous Brothers, just to name a few."

As beautiful as the music is, and as upbeat as musical theater is often expected to be, Carousel deals with difficult topics. If you've never seen it, I won't spoil it for you, but Alhadeff believes facing these topics enriches the theater experience.

"A ticket to Rodgers and Hammerstein's Carousel gives audiences the unique opportunity of experiencing theater through three dimensions at the same time: an 1880s story, through the lens of our 1940s post-World War II retelling, and finally experienced 77 years later in the context of a much more evolved 2022 perspective. The great Stephen Sondheim noted Rodgers and Hammerstein's ability to take the successful innovations of Oklahoma! and apply them to a serious setting: 'While Oklahoma! is about a picnic, Carousel is about life and death.' 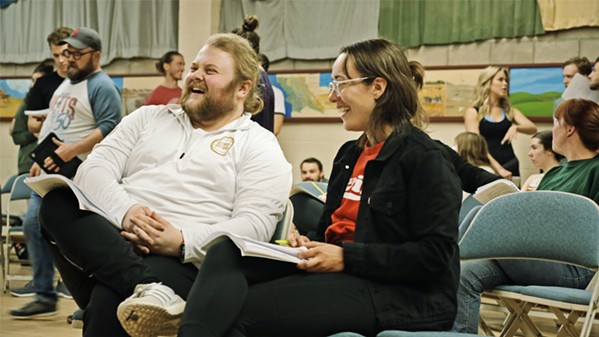 "Identifying with difficult stories and the characters that bring them to life gives audiences the ability to experience empathy," he continued. "Uncomfortable subjects offer observers an outsider's perspective, which can help combat their own unresolved issues. Live theater helps us better understand situations and people in our own lives. Add to that the third dimension of fantastic emotionally charged live music, and audiences have all the tools to confront real issues by experiencing a slice of 'reality' in the safe distance of a theater, which allows our emotional responses to feel real."

The two-show event is going all out production-wise. Expect elaborate sets, costumes, and staging.

"The sets have been built especially for this production," Alhadeff continued. "As OperaSLO is a Grand Opera year-round producing company, with little exception, all OperaSLO productions are entirely original. Attendees will be thrilled to experience two-story gargantuan sets, colorful drops, beautiful costumes accentuated with appropriate time-period props. Everything is built in our costume, set, and prop shops at Camp San Luis Obispo near Cuesta College."

With a musical as well known and beloved as this, how did Alhadeff, Director Zach Johnson, and Opera SLO approach it? Play it straight, tweak it, what?

"Part of my responsibility is to decide what works will be selected for performance, and precisely how they will be told," Alhadeff said. "But that's no small task. It requires knowing our community and ticket buyers very well. It's been my observation that our community likes things performed the way they were intended by the great masters. I believe art speaks most strongly when presented in the light it was intended, and as such, I hire teams that believe similarly. OperaSLO's approach to Carousel is that of an historically accurate production; very similar to what one would have experienced at Broadway's Majestic Theater in 1945: the re-creation of an 1880s New England fishing village, fantastic legit singers, outstanding dance, glorious drops and sets, all accompanied by a 42-musician professional orchestra. Of course, if you know me, and Carousel's brilliant director Zach Johnson, expect twists and surprises."

"The music is so beautiful, and the story and our telling of it called for glorious sets, drops, costumes, and an internationally acclaimed cast of artists all convening in San Luis Obispo," he said. Δ