A recent increase in HIV/AIDS and hepatitis C cases in SLO County is connected to opioid use, according to county Health Officer Dr. Penny Borenstein, who spoke to the Board of Supervisors about the volunteer-run syringe exchange program on Jan. 15.

"With the opioid epidemic ... we are beginning to see a ticking up of hepatitis and HIV infections as an outcome [due to] the increase of injection drug use," she said.

An increase in opioid addiction across the U.S. has driven up rates of intravenous drug use, corresponding with a rise in blood-borne infections, according to the Centers for Disease Control. In her presentation, Borenstein noted that 25 percent of the 385 individuals diagnosed with HIV/AIDS in SLO County reported intravenous drug use. Data included in the presentation also showed that cases of chronic and acute hepatitis C in the county's non-incarcerated population increased from less than 250 in 2016 to nearly 300 in 2017. 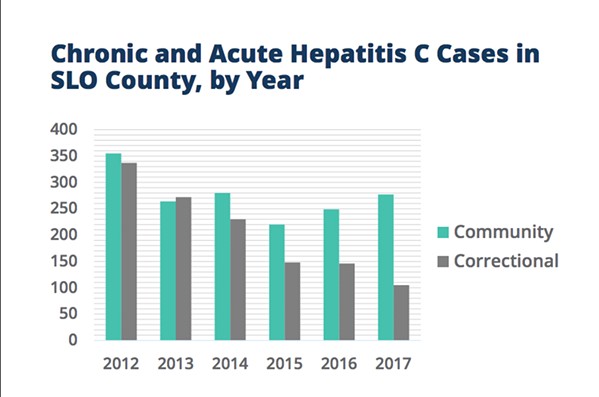 Despite concerns about the increases, there were positive signs that the syringe exchange program, which started in 2006, was succeeding in its mission of harm reduction and disease prevention.

While overall rates were up, Borenstein said that there were lower rates of hepatitis C and HIV infection among users who participated in the exchange program. In addition, the program took in more syringes than it gave out for the fifth consecutive year in a row, a sign that fewer used syringes are circulating in the county.

To combat opioid overdose deaths, the syringe exchange program also distributes the anti-overdose medication naloxone. Over the last two years, the program has distributed 427 naloxone kits, 191 of which were used to prevent overdoses.

Supervisor Bruce Gibson (2nd District) applauded the program and the availability of naloxone, but added that the anti-overdose drug was not a substitute for drug abuse treatment. Supervisor John Peschong (1st District) made similar comments, referring to the death of his nephew Jack, who died of a heroin overdose in 2006.

"I agree with Supervisor Gibson that there has to be a way to get treatment and schedule treatment [so] that they can work to beat their addiction, because that's the only way that this is not going to continue to grow," Peschong said. "This is an epidemic in our community, and it's destroying families."

SLO County is currently one of hundreds of counties, cities, and states engaged in a large federal lawsuit against pharmaceutical companies and drug distributors over their alleged role in fueling the nation's opioid epidemic. The county filed its own complaint against the companies, which include Perdue Pharma, the manufacturer of Oxycontin, in November 2018. Δ