Orchestra Novo will play a live score to the Dec. 31 screening of beloved classic 'The Wizard of Oz' at the PACSLO

When’s the last time you saw MGM’s 1939 classic The Wizard of Oz on the big screen? If you’re like me, never! Yes, I’ve seen it on TV dozens of times, but never in a big auditorium. Now, let’s up the ante. How’d you like to see it on the Performing Arts Center’s massive screen while Orchestra Novo under the baton of Maestro Michael Nowak plays the score live, in sync with the action unfolding before? That’s what’s happening this Saturday, Dec. 31, in the PACSLO (7:30 p.m.; all ages; $75 to $110 tickets available online at pacslo.org or by calling 756-4849). 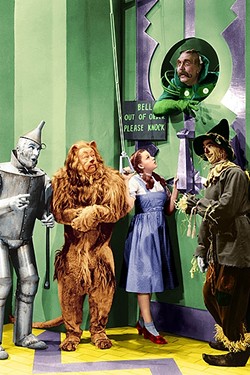 What a great concept! Who came up with it?

“I think it’s a great idea too,” Michael Nowak said during a recent phone interview. “It’s sort of trend that’s been developing over the last 20 years, first with cartoons because the cartoon music behind Bugs Bunny and the like have such super-duper exciting action, music, and sound effects, like people falling down stairs or whatever. People love it, and then companies like Warner Brothers and Disney started offering more and more of these films that have had the soundtracks removed.”

Nowak is an old hand in the Hollywood soundtrack biz having conducted scores for everything from the 2005 King Kong remake to the Kite Runner, August Rush, American Gangster, A Single Man, Life of Pi, and most recently the Denzel Washington and Viola Davis film Fences. He notes that in most cases the soundtrack is the last thing added to a film, making it easy to remove. Nowak also mentioned that composer and conductor John Williams (Star Wars, Ferris Bueller’s Day Off, Jurassic World) has been conducting similar events in places like the Hollywood Bowl for years.

Formerly the conductor of the SLO Symphony, Nowak had been trying to get that orchestra to mount a similar event, but it never happened, in part because of the cost. It’s hugely expensive to rent one of these restored films, which come with special equipment to conduct the screening as well as a technician to operate the equipment.

For his part, Nowak has spent the better part of two months learning the music as well as the film. In normal cases of leading an orchestra, the conductor has total control over when to start and stop. Not so in an endeavor such as this, where both the conductor and orchestra are beholden to what’s happening on the screen. 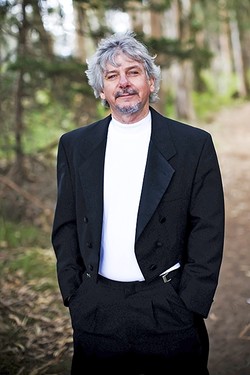 “Yes, it’s an enormous challenge, particularly because the film doesn’t come with a click track,” [which controls the pacing in most soundtrack scores], Nowak explained. “It’s almost like having no freedom whatsoever. Last week, I started working with a clock, which is how John Williams does it.”

“I’ve been really memorizing the last couple months, every day going over the score so that in case we get off a little we can come back. Playing too fast is OK because it’s relatively easy to slow an orchestra down, but too slow is not good because you can’t drag an orchestra quicker—it leads to frantic playing.”

More and more films are being restored to play with a live orchestra, and Nowak and his committee entertained doing several different films as their first attempt, from Hitchcock’s Psycho—imagine Bernard Herrmann’s intense score!—to Casablanca, but in the end, The Wizard of Oz felt like the right first choice. The goal is for the screening and concert to be so successful that Orchestra Novo can do it every year with a new film.

Nowak just finished conducting the score to Fences, and noted what a joy it was to work on the film and what a wonderful man Denzel Washington is, calling him “a serious artist” and “remarkable human being,” but many of his Hollywood musician friends were surprised Nowak was willing to take on such a challenging project with his Wizard of Oz live score.

“My LA friends said, ‘What were you thinking?’ but I think it’s a matter of stamina and focus. It’s like doing a triathlon—you have to be good at everything at once and have to pace yourself. I think it’s going to be pretty spectacular, something really special.”

Judy Garland and Toto, the scary flying monkeys, all the wonderful characters, and the amazing songs such as “Over the Rainbow,” “We’re Off to See the Wizard,” and “If I Only Had a Brain”—this is going to be a memorable way to ring in the New Year. Costumes are encouraged!

If ruby slippers and yellow brick roads aren’t your thing for New Year’s Eve, SLO County’s got a few other options for you, like Donavon Frankenreiter at the Fremont Theater on Saturday, Dec. 31 (9 p.m.; all ages; $40 general admission or $120 for VIP meet and greet at ticketfly.com). 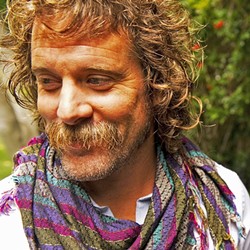 For Start Livin’, the Hawaii-based musician’s fifth album, he “holed up in a Southern California studio for seven days with his longtime bassist Matt Grundy—and no one else,” according to their bio. “The follow-up to 2010’s Glow, Start Livin’ is a nine-track selection of folk-infused songs that sweetly reflect the simplicity of their recording. With its smooth showcasing of Frankenreiter’s rich, honey-thick vocals and masterful guitar work, Start Livin’ bears all the intimacy of an impromptu back-porch performance and the tenderness of a treasured love letter.”

Sounds pretty good! Frankenreiter himself called the record a “love album,” adding, “Most of the songs are about my wife and our two boys, and the life that we’ve built together in Hawaii.”

If you like Jack Johnson or Matt Costa, Frankenreiter is right up your alley.

“To me, the most beautiful thing about this record is it really reflects who I am today,” Frankenreiter said. “Start Livin’ means stop worrying about where you’ve been, where you’re going—just start embracing what you have around you. Start loving what you have right now.”

Sounds like the right message for a new year!

Hear great songs made famous by The Beatles, The Beach Boys, The Doors, Creedence Clearwater Revival, The Rolling Stones, and many more, and enjoy a buffet dinner by Giuseppe’s, with a menu of seasonal bruschetta and stuffed mushrooms, butter lettuce and avocado salad, chicken alla parmigiana with rigatoni Italian, beef braised in Barolo with seasonal vegetables, house-made baby rolls with butter and bread dip, gourmet lemon bars for dessert, and complimentary coffee and water. Vegetarians may request eggplant parmigiana with rigatoni in advance. 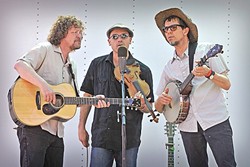 There will also be a no-host cash bar and $10 corkage fee benefiting the Arroyo Grande Knights of Columbus, plus noisemakers and a complimentary champagne toast at midnight.

Expect a “fun, refreshing fusion of vintage fiddle tunes, blazing mandolin, and songs of old-time Americana,” organizers said in press materials. “Kenny Blackwell (mandolin and guitar), John Weed (fiddle), and Stuart Mason (guitar, banjo, and mandola) are the bluegrass-roots trio Little Black Train. From Depression-era gospel and blues to Appalachian and Celtic dance tunes, they dig up the roots of bluegrass that traveled to America from Ireland and Scotland in the 19th century.”

They’ll be joined by other local pickers to help raise funds for the 10-year-old Red Barn Community Music Series.

“We give equal weight to traditional melody playing and the old songs, as well as fiery improvisation on mandolin and fiddle,” Mason added. “Before the boom of commercial radio in the ’20s and ’30s, you would have heard more evidence of the old country in the sound of the fiddle, that’s where John’s style comes into play. He invokes the timeless spirit of Donegal and Clare in the tunes he brings to us. Kenny has a long history of jazz, swing, blues, and bluegrass on the mandolin, and you can hear it all when he plays with the Train. As for my songs—I was born in West Virginia. My father’s family lived there since long before it split off from Virginia. My grandpa worked the C&O Railroad, and his father was a circuit-riding preacher, so I’ve got fire and brimstone and coal dust under my skin.”

Should be a hoot, but maybe you’re more into dance and electronica, in which case you should head to the masquerade ball and see Tropo at SLO Brew on Saturday, Dec. 31 (10 p.m.; 21-and-older; $20 at Boo Boo’s and ticketweb.com).

This house fusion features Californian producer Tyson Leonard, who “composes compelling and hypnotic dance music, a mix of electronics with his violin and mandolin,” according to his bio. “His live sets take you through a world of house fusion and down tempo woven by classical, Gypsy, Middle Eastern, Latin, and bluesy roots threads.”

Tyson often appears as a solo but for this show he’ll have the Tropo trio, with Adam Kapuscinski (drums and percussion) and Grant Leonard (bass and keys). In 2016, they appeared at Lucidity, Big Surreal, Burning Man, Symbiosis, Earth Jam, and more.

The evening will feature a photo booth and midnight champagne toast.

And here’s one more option: Singer Steven Michael will perform his “Tribute to Frank Sinatra” at Paso Robles’ Allegretto Vineyard Resort under the auspices of the SLO Jazz Festival this Saturday, Dec. 31 (doors at 7:30 with music at 8:15 p.m; 21-and-older; $225, which includes a five-course dinner, concert, general seating, New Year’s frivolities, and a champagne toast at midnight; available at slojazzfest.org). 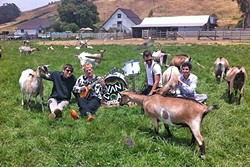 High-energy swing and surf rock band Van Goat plays Frog and Peach on Thursday, Dec. 29 (8:30 p.m.; 21-and-older; free). According to their bio, “Van Goat takes the tradition of fun, fast, eclectic surf rock started by bands such as Agent Orange, The Pixies, and The Minutemen, mixed with their own brand of swing punk reminiscent of The Squirrel Nut Zippers. Fast, crass, and extremely catchy, Van Goat’s music is defined by constant hooks and changes.”