Having lived in Orcutt for the last 43 years, painter Sheryl Knight is no stranger to the Central Coast and its distinctive scenery. Currently represented at six galleries in California, three of which are here in San Luis Obispo County, Knight's artistic mark is multifaceted. 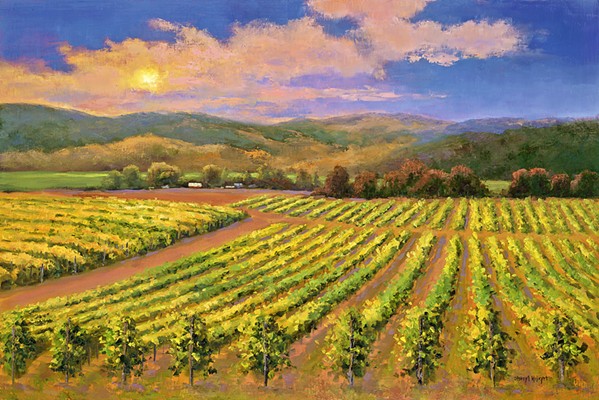 "Representing the Central Coast, the three types of landscapes would be seascapes, vineyards, or the golden hills with oak trees," Knight told New Times. "I think that represents our area more than most anything else."

One of Knight's current gallery showings is at Park Street Gallery in downtown Paso Robles. The exhibition features all three of the key local landscapes that Knight identified, though it focuses on vineyard scenes. It hangs through Oct. 31.

While vineyards are appropriate for a gallery that sits in the heart of North County wine country, Knight said she feels more inspired by less predictable sceneries.

"I've become known for painting vineyards, but it's not my favorite thing to paint. They can be tedious," she said of the distinctly California subject matter. "If I could just paint anything I wanted, I think I would paint mostly mountain scenes."

As someone who makes a living off selling her work, Knight explained how catering aspects of her work to her desired audience is simply a part of being a creative professional. While she prefers to paint on larger canvases, Knight shows smaller works at the Nancy Dodds Gallery in Carmel because the quaint oceanside town is a popular tourist destination. The small works sell better there because many gallerygoers are not from the area and must be able to transport their new piece home.

Though she said she "would paint large over small any day," a small canvas can be advantageous for painting en plein air, Knight said. When painting outdoors and on location, the smaller and simpler the supplies, the better.

"When I first started plein air painting I remember I used a French easel, and it collapsed on me on the beach, in the sand: painting face down," Knight remembers. "Now I've got it down to equipment that I can pretty much carry on my back. I try to keep it as simple as possible."

Other than the small pieces that she shows in Carmel, Knight said that painting outdoors is more about remembering the moment than creating a work she intends to sell.

"I don't go out to sell the plein air painting as much as to have it just for reference," Knight said of her process. "It's a study for me, so I know what I've seen and what I've observed while I was out there." 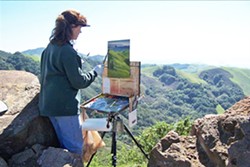 Though Knight splits her time between her studio and the outdoors, she said there is something that only en plein air painting can achieve.

"The advantage of painting from life is that you have the feeling of the scene, you're actually out there with it," she said. "There's an emotional connection that you won't get from a photograph necessarily."

As is distinctive of impressionism, paying close attention to light and contrast is key for Knight.

"I think the most striking thing for any artist is how the light hits the scene," she said. "If there's not good light, it can look really mundane. But if it's lit up beautifully, it can make all the difference in the world, even for something that isn't normally a striking scene. It's all about the light."

Knight's work is also impressionistic in the way that she manipulates the thickness and texture of oil paint.

"I tend to do a lot of palette knife painting, which keeps it loose and somewhat thick," she said. "I just love working with oil. I love the consistency, the viscosity, the color mixing. That's one of my joys."

Despite having painted for most of her life, Knight said she is still always discovering new places to improve.

"I've been known to take paintings and if it hadn't sold, I'll bring it back and repaint the whole thing until I really feel good about it," she said. "I think it actually gets harder, the more you paint, to be satisfied with your work. You'd think it would be the reverse. But I don't want to stay where I'm at; I want to constantly get better." Δ