Photo Courtesy Of Ken And Stephanie Wilbanks LAMINATED BALTIC BIRCH An ode to Dairy Queen, Ken Wilbanks' All The Flavors was sculpted from plywood that was glued together.

Through May 3, you can take in the full view of CaliforniaAesthetic3D at Studios on the Park, Sunday through Thursday from noon to 4 p.m. and Friday and Saturday from noon to 9 p.m. at 1130 Pine St. in Paso Robles. Or you can catch the sculptures by Carl Berney, Peter Charles, Mecki Jeussen, George Jercich, Larry Le Brane, Ron Roundy, and Ken Wilbanks anytime online at studiosonthepark.org.

It's difficult to explain exactly what California's aesthetic is, but Paso Robles sculptor Ken Wilbanks said you'll know it when you see it.

"I just seems like there's an artistic freedom here that isn't really as restricted as some schools in some places," Ken said. "It's wide open. It's not one look."

He explained that contemporary sculpture on the East Coast deals with a lot of hard lines, while art on the West Coast is a little more free form, a little softer, a little rounder. Rather than using material such as marble, many California sculptors instead rely on wood, glass, and steel or found objects.

"Even though some of the pieces are quite linear, there seems to be something a lot more earth-centered about them," Ken said. "We like to say California has a big heart."

The "we" in that statement includes his wife, Stephanie Wilbanks. Together, Ken and Stephanie present a 3D show at Studios on the Park through May 3. The couple invited several Central Coast sculptors to exhibit their work in CaliforniaAesthetic3D, including work from Mecki Heussen, George Jercich, Larry Le Brane, Ron Roundy, Carl Berney, Peter Charles, and Ken. 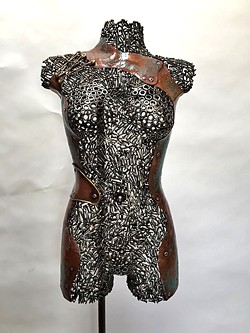 The sculptures on display are as varied as the media, from Heussen's Copper Maiden—a female bodice created with steel screws, nuts, copper, and cement—to Jercich's Mouse Trap—a mouse trap crafted from metal and wood squishing a blown glass orb—and Ken's All The Flavors—suspended soft serve ice cream sculpted from laminated birch plywood. Stephanie said that they were thinking about the classic philosophy of aesthetics in art when pulling the show together.

For instance, I was drawn to Heussen's sculptures, which are intricately detailed, bold pieces. The Cambria resident has an extensive list of credits to his name on IMDb for his special effects work, including The Chronicles of Narnia: The Lion, the Witch, and the Wardrobe and Friday the 13th Part VII: the New Blood.

"He finds a lot of metal objects on the beach and he puts them together," Ken said. "When you walk up to it, it's amazing the detail, and he welds each of those with a MIG welding process."

Ken said he was particularly drawn to Jercich's Mouse Trap because he marvels at how the artist was able to depict a squished globe of glass in a mouse trap.

"It causes this visual tension," he said. "The first time I ever saw it, it knocked me out." 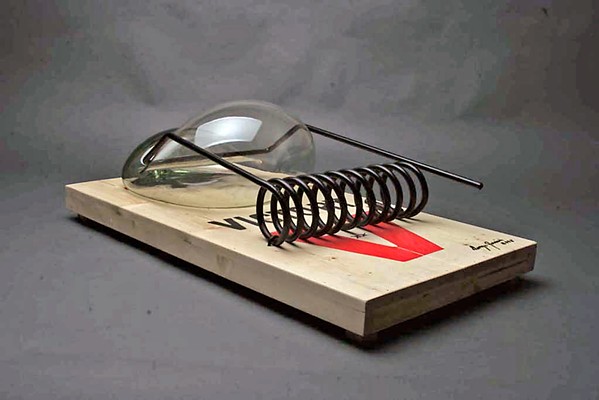 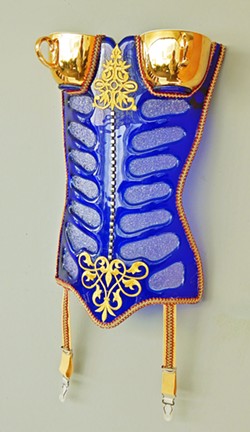 Part of what makes art in California so unique, he said, is the way the state's geography is. It's diverse, beautiful, and inspirational. Plus, he added, the community on the Central Coast just embraces art, something that's unique from other places the Wilbankses have lived.

They moved to Paso Robles from Arizona about nine years ago to be closer to their children, who both went to school in the Bay Area. Ken sculpts with birchwood plywood, Stephanie with glass, and both got the chance to focus on their art full time once they moved to the area, almost immediately linking up with Studios on the Park to get involved in the community.

Although it's been somewhat hard to connect with that community of artists during the pandemic, Stephanie said it's given everyone a chance to focus on their work. And, art sales have gone up as well.

"They're things that people fall in love with and want in their home, and I think that's a cool sideline to the pandemic," she said. "Unexpected things have happened." Δ